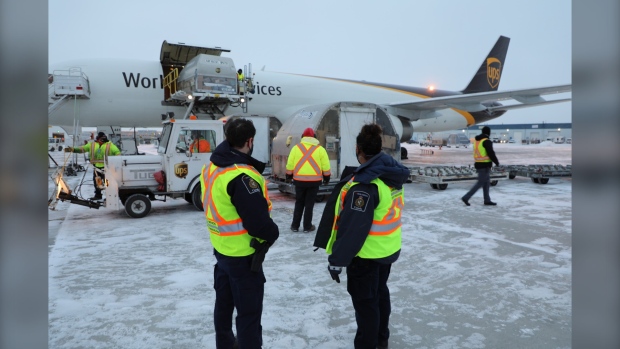 WINNIPEG — As the first COVID-19 vaccines arrive in Manitoba on Tuesday, the province says it is ready to begin immunizing people on Wednesday.

“As we round out 2020, and look ahead to a new year, there is hope in the window for a safe and healthier future,” Pallister said.

The first immunizations will be administered at University of Manitoba’s Rady Faculty of Health Sciences on Bannatyne campus, located next to the Health Sciences Centre in Winnipeg. The vaccines are stored there at an ultra-low temperature, and cannot be moved after delivery.

The immunizations begin nine months after the first COVID-19 case was found in Manitoba.

Pallister said the COVID-19 Vaccination Implementation Task Force has been working to ensure the immunization rollout is effective and safe. Almost 900 appointments have been booked between Wednesday and Friday for the first of two doses.

Each immunization station has a laptop for data entry, and will help with surveillance efforts for the vaccine, Pallister said.

The follow-up appointment for the second dose of the vaccine, which occurs three weeks later will be made during the first appointment. Each appointment is 45 minutes, which includes a 15-minute recovery period.

“Medical staff will monitor those who have received the vaccination, looking for any effects that may occur as a consequence,” Pallister said.

The second dose will be administered at the immunization super-site at the RBC Convention Centre in Winnipeg.

Pallister said a freezer to safely store the vaccine was installed at the centre, which is expected to be fully operational in January.

“This is the first step in our commitment to establish fixed vaccination sites to protect Manitobans throughout our province,” he said, noting future sites will be located in Brandon, Thompson, Steinbach, Gimli, The Pas, and Portage la Prairie.

Pallister said the province is expected to receive other COVID-19 vaccines in the future that can be broken down into smaller amounts and be transported, and will create mobile vaccination teams to vaccinate more people in the province, especially those in remote areas. When more vaccines arrive, a conventional immunization program will take place.

Pallister said he is “waiting his turn” to receive the vaccine.