Forever task-driven and laser focused, Mike O’Shea is locked in on exit meetings with Winnipeg Blue Bombers players and answering questions before they head out all over the map.

Yet, the biggest question of all – for the players, the fan base and the organization itself – is the one he still can’t answer yet; namely his own future as the club’s head coach and cornerstone to the Canadian Football League powerhouse the team has become. The third-winningest coach in Blue Bombers history behind only Bud Grant and Cal Murphy, O’Shea’s contract is soon to expire.

“I’ve had a couple conversations with Wade (Miller, Blue Bombers President & CEO), but you have to understand we’re still only a few days removed from the Grey Cup loss,” O’Shea began Thursday in an end-of-season media session. “The process we’re in right now is still exit interviews. In fact, I had a player coming to my room right before I came here and another player waiting in the hallway for me. We’re still getting through the end-of-year conversations with all the players.”

O’Shea said his conversation with Miller was short and also indicated he was not aware of any CFL teams – both the Ottawa RedBlacks and Montreal Alouettes are in coaching searches – who may have asked for permission to interview him. Asked specifically how much he wanted to be back with the Blue Bombers, O’Shea said: “We’ve had a lot of success here and we’ve got a lot of guys back. The group of guys we’ve assembled here is just so easy to be around” and added later about potential contract negotiations, “It’ll get worked on when I have time to work on it.”

O’Shea was also quizzed about his interest in potentially taking on more management duties – like Wally Buono, Cal Murphy and others before him – but wouldn’t even entertain that thought.

“I’ve never been in a position and been thinking about another position,” he said. “You’ve heard me say it 100 times if I’ve said it once: as a player I never thought about being a coach. I never critiqued coaches; I never did anything like that. I was, ‘You’re the coach. You tell me what to do. I do it.’

“I have my role and I solely focus on my role. I really do. And I don’t even entertain ideas of other roles because that’s not where I’m at right now. I try to stay as present as possible. To me, that makes it pretty easy.”

Other highlights from O’Shea’s media session:

On the tone he is getting from players in their exit meetings:

“I don’t think it’s unfinished business. I think it’s certainly disappointment. A lot of guys are still feeling sick to their stomach. What helps is teammates, a lot of guys spending time with teammates and just trying to get one last hour together before they go their separate ways.

“There’s a real big group for a day and a half and then a couple guys have to filter out or get on a flight or get driving and it just kind of gets down to a point where there’s a group of guys that are clinging on to every last second they can get.” 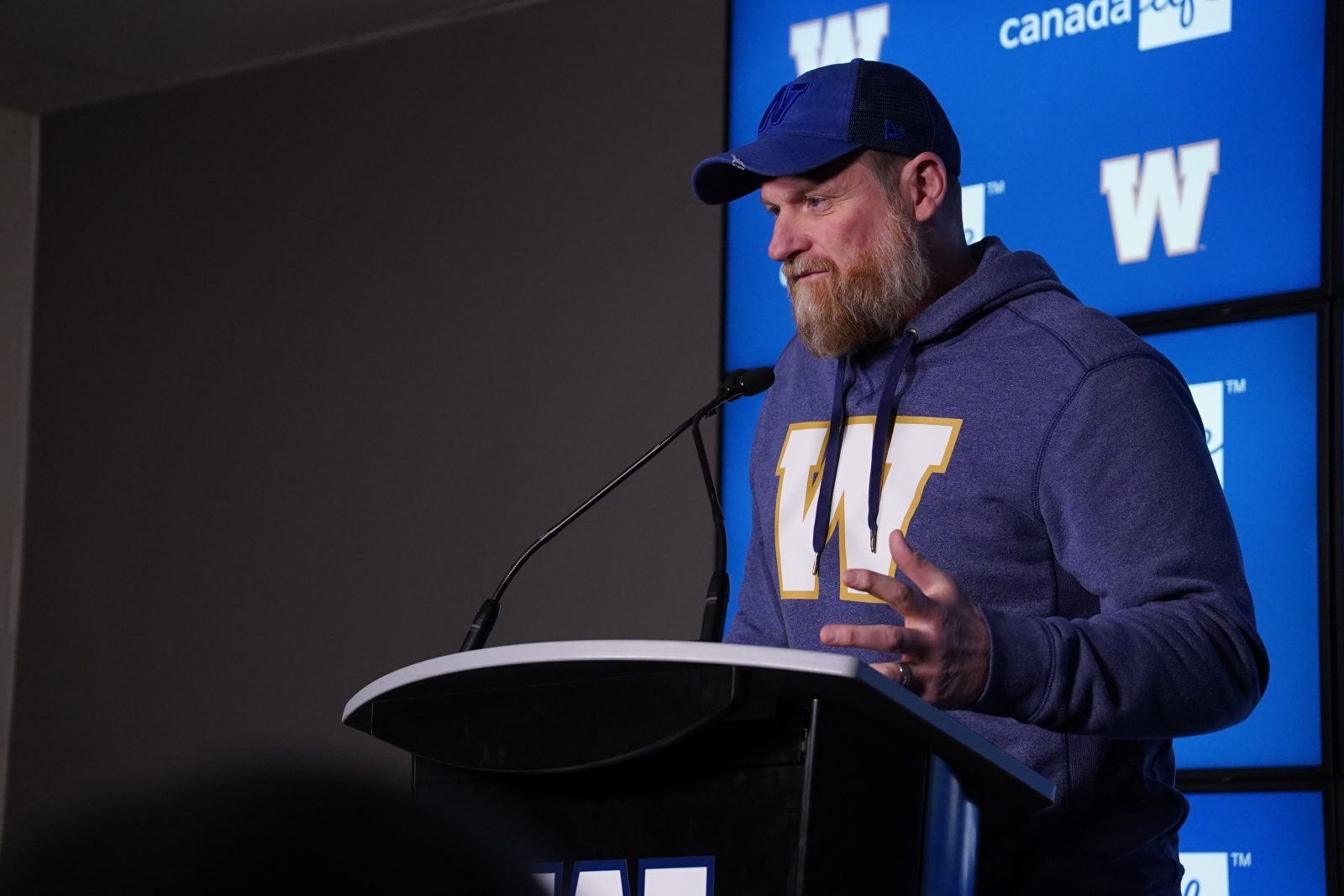 On the culture built here and the success, with two Grey Cup wins, three Grey Cup appearances and six straight double-digit win seasons and how that might impact the decisions of pending free agents:

“The point once again goes back to the group. They’ve built something very cool here. I don’t want to attach too many adjectives to it. What they’ve built is something they can be very proud of. And they have to decide if they’re going to give that up, what that looks like. But they have really built something pretty special, so they should consider that as part of the idea of their future.

“In that locker room, as a group of guys with leaders, the group character is in a pretty good place. It’s different when you’re talking about that compared to talking about talent. I think it’s OK to say that we’re in a really good spot in that regard. In pro sport you’re always assessing talent and looking at how you can get better, but I think we’re, from the other angle (as far as culture), we’re in a really good spot with a lot of people – real great men that get it.

“I address the team about free agency. I never used to, but I do now because I think we’re in a good spot, right? And I do think that, obviously, with the success we’ve had and the way the guys feel about each other, a lot of teams would like a lot of our guys. Doesn’t always mean it’s a good move for everybody. So, in the individual meetings, I ask them where they’re at contractually, what their status is, what they’re thinking and go from there. But I don’t get involved in the negotiations.

“I do like to hear from a player standpoint how they think they’re going. If they want to call me and chat, then they can call me and chat. They certainly know they have that ability to fill me in on how things are going.” 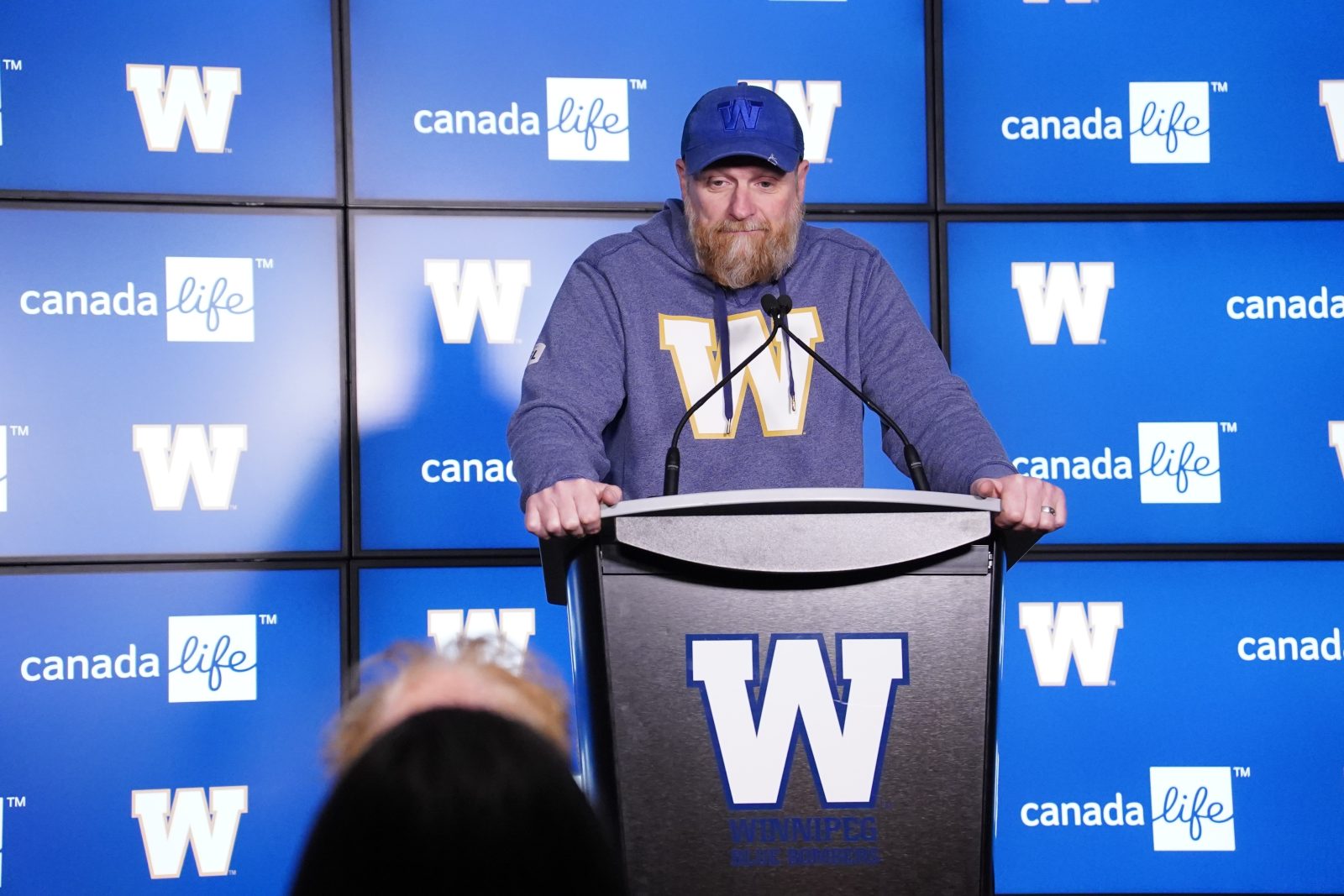 On how long Sunday’s Grey Cup loss will sting:

“The truth of that, the answer to that, is forever. The group that has been fortunate enough or been a big part of winning 2019 and 2021, they will remember 2022 probably more vividly than ’19 and ’21. That is the unfortunate part of sport, is we are stuck with this forever and that’s what drives guys nuts.

“So, yeah, it’s hard to shake that. It will be hard to shake that. But we all know that. I can remember missed tackles in big games more than I remember the celebration after big games. Absolutely. So, we know that getting into it. It’s the crappy part, one of the crappy parts, about this business, is unfortunately we will hang on to that way longer than we will the successes we’ve had, which stinks for the players.”

On Marc Liegghio and his missed convert in the Grey Cup:

“… He’d like to make that one convert. We’d like to, too. But that one point, you’re taking a point and saying that is the reason, which I think is not true. I mean, we should be able to, it’s CFL football, we should be able to make up a point in the span of 14 minutes. If you look at that specific game, I think the kicking game was pretty tough. On both kickers, that game. And the blocks, that’s not kicker-driven, you know?”

On whether he is OK with the status quo in the kicking department (Liegghio is under contract) next season:

“If you look at the way we approach things, win or lose, there’s always 100 guys in training camp and competition at a lot of spots. So, I don’t foresee that changing. But it’s not because we lost. It’s because it’s the process we follow, win or lose, over the course of my nine years here. We’ve steadily improved or gotten better, minus the first two years. But we’ve tried to get better every single year. And through the process of adding to our roster and bringing in competition. That’s what we do. So, I don’t see that changing.

“I think everybody’s committed to getting better, regardless. You’re asking specifically about Leggz, I think he’s going to come back and be better, also. It’s his first full year kicking and what he does this off-season is going to prove out and allow him to be better than he was this year. Just like all the other guys are going to try and improve. Stanley Bryant, who’s won four outstanding lineman awards is going to try and get better before he comes to camp. So, I imagine we’re going to be an improved team.”

(19538)
$31.99 (as of December 5, 2022 10:26 GMT -06:00 - More infoProduct prices and availability are accurate as of the date/time indicated and are subject to change. Any price and availability information displayed on [relevant Amazon Site(s), as applicable] at the time of purchase will apply to the purchase of this product.)

(306)
$17.01 (as of December 5, 2022 10:26 GMT -06:00 - More infoProduct prices and availability are accurate as of the date/time indicated and are subject to change. Any price and availability information displayed on [relevant Amazon Site(s), as applicable] at the time of purchase will apply to the purchase of this product.)

(1000)
$18.99 (as of December 5, 2022 10:26 GMT -06:00 - More infoProduct prices and availability are accurate as of the date/time indicated and are subject to change. Any price and availability information displayed on [relevant Amazon Site(s), as applicable] at the time of purchase will apply to the purchase of this product.)