A farming community in central Manitoba is pulling together after a toddler and two adults were found dead Friday afternoon in their modular home that was gutted by fire.

The roads in Plumas, Man., population 243, were quiet on Sunday as residents mourned the loss of the family that lived in the home west of town.

“This is a huge tragedy for such a small community and there isn’t going to be anyone who isn’t impacted by it,” said Donna Miller Fry, the superintendent of Pine Creek School Division.

Spruce Plains RCMP, along with fire and EMS crews, responded to a fire just after 3 p.m. Friday at a residential property alongside Provincial Road 265 where they found a modular home in flames.

Once the fire was extinguished, responders entered the home and found the bodies of a 36-year-old man, a 28-year-old woman and a two-year-old girl, who were all residents of the home, RCMP said in a news release.

Four other children who also lived in the modular home were found safe at another location, RCMP said.

The chief of Plumas Fire Department said flames were pouring out the windows and climbing up the side of the structure “like a matchbox” by the time his crew arrived. The closest neighbour lives almost a kilometre away.

“We got the fire out, but it was too late already,” fire Chief Gordon Coutts said. 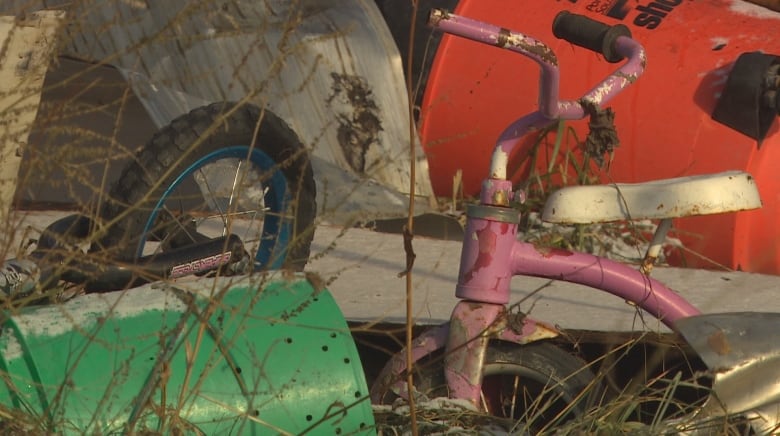 A little pink tricycle could be seen outside the modular home on a lot of farmland with outbuildings and a few vehicles in the yard on Sunday. (Justin Fraser/CBC)

Coutts, who has been fire chief for two decades, said he was shocked to find three people inside the home.

“It’s going to be tough at the school for a while.”

The school division’s superintendent said the entire school quickly banded together to watch over the four other children until arrangements could be made.

“Because when you have four children in a school it’s impacting every grade level in the school,” Miller Fry said.

“Anyone who works in education is embedded in the lives of the children that we care for every day,” she said. “Certainly you feel these tragedies really hard. They impact you.”

Plumas Elementary School has only 50 children enrolled. Miller Fry said it was overwhelming to drive to the school on the Saturday of a long weekend and see every single staff member there. 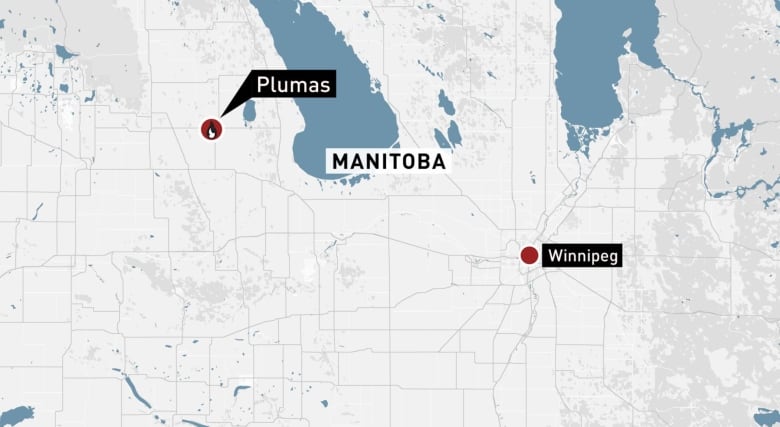 RCMP say the fire commissioner’s office is assisting with the investigation into a fire west of Plumas, Man., that killed two adults and a two-year-old. (CBC)

Educational psychologists, social workers and a student support services team worked together with teachers and support staff at the school to come up with an immediate response plan. Miller Fry said the school sent out a message to every family with students enrolled to let them know what had happened and offer parental support materials.

“Every one of our school families is being called personally this weekend to have a conversation about how to support them in supporting their children around this tragedy,” Miller Fry said.

Miller Fry said people who want to help can leave messages with the school division, which is working with the family to figure out what they need. To protect the youth, Miller Fry would not mention where the four affected children are now, but she said there was no doubt in her mind that they are being taken care of.

“No information will be released until after an autopsy has been conducted,” said Paul White, a spokesperson for the office of the fire commissioner.

Support will be in place for staff and students when school resumes on Tuesday.