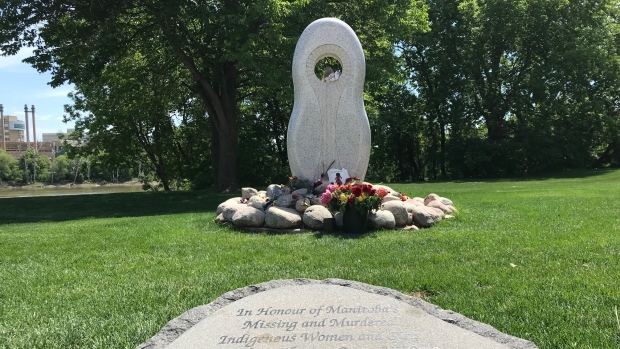 WINNIPEG — One day after the release of the National Action Plan, Manitobans continued to honour Missing and Murdered Indigenous Women and Girls.

People visiting a monument at The Forks dedicated to their lives left flowers and offerings of tobacco but some continue to wonder what will change.

“They really, really failed Tina and all the women out there that are still missing and murdered and their cases are not closed,” said Thelma Favel, the great-aunt of 14-year-old Tina Fontaine.

“They got our hopes up saying that they were going to get to the bottom of this and nothing has been done,” she said in a phone interview with CTV News.

“As part of the National Action Plan, we released the federal pathway — the Government of Canada’s contribution,” Carolyn Bennett, Minister of Crown-Indigenous Relations, said Friday.

For its part, the federal government has set aside $2.2 billion for commitments related to the inquiry to make improvements in four key areas: health, culture, security and justice.

The action plan has no dollar figures or timelines attached but Bennett promises Ottawa will measure progress and adapt the plan as needed.

“We will continue to be able to be accountable for the results we’re getting and the timelines and the funding will be explicit in the implementation plan,” Bennett said.

Advocates in Manitoba said governments will need to work together alongside local and grassroots Indigenous groups to implement the priorities laid out in the plan.

Favel hasn’t given up hope. It is just that she has yet to see signs of improvement.

“They can talk about it all they want but until you see action being done about it, then I could get excited,” Favel said. “Right now they just let Tina down, they let us down — like the families of the murdered and missing.”

The plan also calls for a national task force to review and reinvestigate unresolved cases and for police services to hand over those cases to the task force.

The Manitoba government has said its reviewing and fully assessing commitments to the plan and pledged to work with Ottawa and Indigenous groups on new initiatives.