You Are Here Home news Tornado near Rapid City, Man., had winds of 190 km/h: Environment Canada 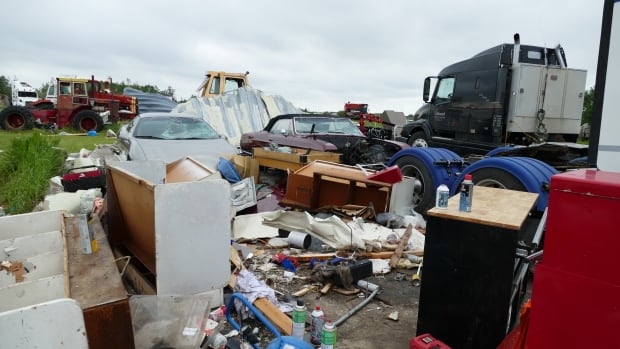 Environment Canada has rated a tornado that touched down near Rapid City, Man., as a preliminary low-end EF-2.

The weather agency said the twister, which touched down late Sunday afternoon about five kilometres south of the town, which is located about 30 kilometres north of Brandon, had a maximum wind speed of 190 km/h.

The Enhanced Fujita Scale, or EF-Scale, is used by Environment Canada to measure the intensity of wind damage. It measures from an EF-0 as the weakest, to an EF-5 as the strongest.

Its path was 5.6 km and was about 200 metres wide, Environment Canada said.

Environment Canada said the same system dropped golf ball-sized hail, rainfall in excess of 150 mm, and a small area of downburst damage northwest of the tornado track, where a number of grain bins were toppled.

No one was injured or killed as a result of the storm.

The weather agency said it is actively seeking pictures of the tornado or damage it may have caused, and asks people call 1-800-239-0484, send an email to ec.storm.ec@canada.ca, or tweet to #mbstorm.

A series of thunderstorms left a swath of damage across southwest Manitoba on Sunday. Rising floodwater in its wake has led to even more damage across the region.

It comes as Environment Canada again issued severe thunderstorm watches on Tuesday evening in anticipation of another stormy night.

The bulletin said severe thunderstorms associated with a low pressure system in North Dakota are pushing northwards into Canada.

The agency warned of large hail, torrential downpours and damaging wind gusts will be associated with the strongest of these thunderstorms. The threat of severe weather will begin to push eastward tonight as the low pressure system evolves.

Up to the minute watches and warnings can be found on Environment Canada’s website.

The watch was issued for: