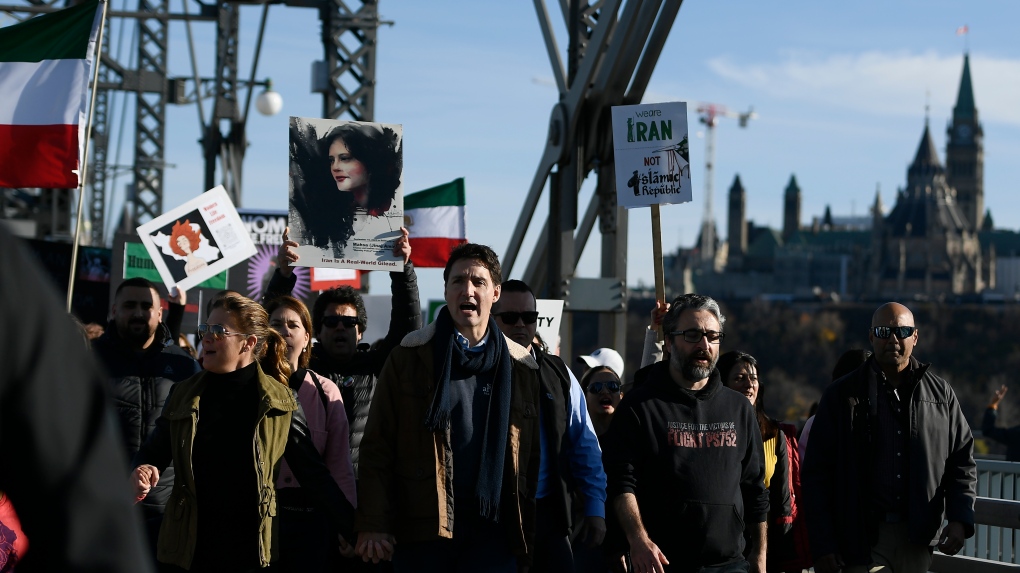 Prime Minister Justin Trudeau stood with the families of the victims of Ukraine International Airlines Flight 752 on Saturday as they lent their voices to the worldwide calls for revolution in Iran through a series of co-ordinated protests across Canada.

But even as Trudeau touted Canada’s new sanctions against the Iranian regime, some activists called on the federal government to go further to show it will no longer tolerate the country’s human-rights abuses.

Throngs of demonstrators lined the streets in 10 cities ranging from Halifax to Vancouver as part of a worldwide “human chain” organized by the Association of Families of Flight PS752 Victims.

Organizers said the events were being held in solidarity with antigovernment protests in Iran sparked by the Sept. 16 death of Mahsa Amini in the custody of the country’s morality police. Amini died after being detained for allegedly violating the country’s strict Islamic dress code for women.

In Ottawa, hundreds of protesters stomped their feet in unison and chanted Amini’s name outside the National Art Gallery.

As the prime minister, his wife and several Liberal members of Parliament joined the crowd, he was greeted with boisterous applause, but also chants urging Canada to take action against the Iranian regime.

Trudeau said the government has moved forward with unprecedented sanctions and made leadership of the Iranian regime inadmissible to Canada.

“We know there are people in Canada now who have benefited from the corrupt, from the horrific regime in Iran and who are hiding amongst … this beautiful community,” Trudeau said.

“Taking advantage of Canada’s freedoms, Canada’s opportunities, and using the riches they stole from the Iranian people to live a good life in Canada. Well, we say no more.”

The crowd responded to his comments with an uproarious cheer and chants of “kick them out.”

The prime minister said his government will be working to make sure Canada is never again a safe haven for “killers, murderers, and those responsible for the oppression of Iranian people.”

After his speech, Trudeau led hundreds of protesters in a march across the Alexandra Bridge between Ottawa and Gatineau, Que.

The protesters stood shoulder to shoulder across the entire half-a-kilometre span of the provincial border crossing, where the prime minister joined in chanting “justice in Iran” and “stop killing in Iran.”

Earlier this month, Trudeau announced that more than 10,000 members of Iran’s Revolutionary Guard will be forever barred from Canada as part of tough new immigration measures.

But some critics said the move was too little, too late.

The prime minister came under scrutiny from some in the Iranian community last month for not attending rallies in the immediate aftermath of Amini’s death. The critics pointed out the prime minister did, however, find time to go bungee jumping while other politicians stood in solidarity with their cause.

Toronto organizer Amirali Alavi called on Trudeau to back up his support for Saturday’s protest with substantive action, such as expelling Iran’s ambassador from Canada.

“We are here to ask our government and Canada to stand on the right side of history,” said Alavi, a board member of the Association of Families of Flight PS752 Victims. “Stop negotiating with the regime in Iran while people are fighting in the streets.”

At a midtown intersection, demonstrators held pictures of loved ones who were among the 176 people, including 55 Canadian citizens, killed on Jan. 8, 2020 when Iran’s Revolutionary Guard shot down a Ukrainian airliner.

Arash Morattab, who lost his brother and sister-in-law in the crash, said the victims of Flight 752 have common cause with the protest movement that has rocked Iran for nearly a month and a half.

“We are all victims of a regime that started killing people from the first days of them coming into power, and this keeps going until now,” said Morattab. “They killed our beloved ones in January 2020, and now they kill other people that fight for their rights.”

The fight for justice is particularly resonant for women in Iran who continue to be denied freedom, said protester Sara Ahmadi. She said she ran into problems with the regime because she wasn’t legally married to her common-law partner, who was killed in the plane crash.

“Women don’t have any rights in my country,” Ahmadi said. “It’s not just about the hijab. It’s about everything.”

The protests in Iran first focused on the state-mandated hijab, or head scarf for women, but quickly grew into calls for the downfall of the country’s theocracy. At least 270 people have been killed and 14,000 have been arrested in the protests that have swept over 125 Iranian cities, according to the group Human Rights Activists in Iran.

The Iranian government has repeatedly alleged that foreign powers have orchestrated the protests, but have not provided evidence to support the claim.

Similar protests unfolded on Saturday in cities such as Vancouver, Edmonton, Calgary, Winnipeg and London, Ont.

In Halifax, the show of support for the people of Iran moved some demonstrators to tears, said Reza Rahimi, who lost his mother-in-law when Flight 752 was shot down.

“(Locals and) immigrants from every nation and every race were standing beside us,” Rahimi said.

“Three years after losing my mother-in-law abroad, I’m not saying it’s let us move on — we would never move on — but it will help us put something on the pain.”

This report by The Canadian Press was first published Oct. 29, 2022. With files from the Associated Press.

We stand united – united in support of Iranian women, united against Iran’s heinous behaviour, and united in our resolve to hold this oppressive regime accountable. Today, that unity was on display in Ottawa. pic.twitter.com/2CLzWbfYez

Things To Do While You Poo On The Loo: Activity Book With Funny Facts, Bathroom Jokes, Poop Puzzles, Sudoku & Much More. Perfect Gag Gift.

(5676)
$8.99 (as of December 5, 2022 10:26 GMT -06:00 - More infoProduct prices and availability are accurate as of the date/time indicated and are subject to change. Any price and availability information displayed on [relevant Amazon Site(s), as applicable] at the time of purchase will apply to the purchase of this product.)

(45518)
$14.99 (as of December 5, 2022 10:26 GMT -06:00 - More infoProduct prices and availability are accurate as of the date/time indicated and are subject to change. Any price and availability information displayed on [relevant Amazon Site(s), as applicable] at the time of purchase will apply to the purchase of this product.)

(82)
$20.99 (as of December 5, 2022 10:26 GMT -06:00 - More infoProduct prices and availability are accurate as of the date/time indicated and are subject to change. Any price and availability information displayed on [relevant Amazon Site(s), as applicable] at the time of purchase will apply to the purchase of this product.)