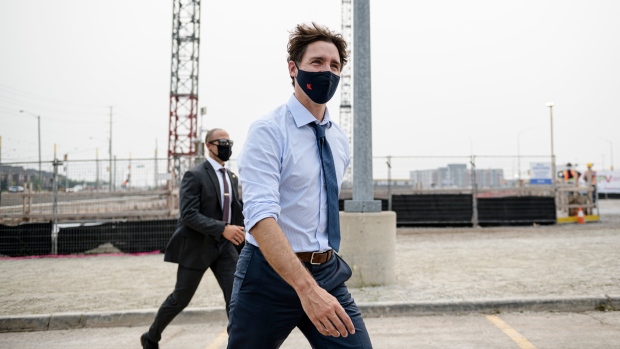 OTTAWA — Prime Minister Justin Trudeau says it’s not up to Canada to weigh in on how and when the U.S. decides to reopen its border to Canadians following Monday’s announcement that fully vaccinated Americans will be able to enter the country for discretionary purposes starting Aug. 9.

“I think every country should and does set its own border policies. We have been working with the United States to keep them informed to make sure that as much as possible our choices are aligned, but you will have seen, everyone will have seen that our countries took different approaches certainly during the beginning of the pandemic,” he told reporters on Tuesday.

Trudeau was responding to questions about why Monday’s announcement wasn’t made in concert with the U.S. administration to allow a similar relaxing of border restrictions for fully vaccinated Canadians.

He added that the response to border measures from both governments has been “asymmetric” since the start of the pandemic.

“Over a year and a half ago, we imposed a two-week mandatory quarantine for anyone that came into Canada. We brought in mandatory testing. We ensured steps that the United States never quite took in their approach,” he said.

“Canada is not going to any more dictate what the U.S. should be doing around its border policy than we would accept the U.S. to dictate to us around our border policy.”

During Monday’s announcement, Public Safety Minister Bill Blair said he spoke to his American counterparts about the steps the Canadian government was taking to ease restrictions and that he was confident there would be a similar approach south of the border in the near future.

Currently, air travellers to the U.S. need to only submit a negative COVID-19 test no more than three days prior to departure, or proof from a health-care provider that they have recovered from COVID-19 in the past 90 days, but entry by land is otherwise restricted.

U.S. travellers who plan to enter Canada as of 12:01 a.m. EDT on Aug. 9 must have completed a full vaccination course with one of the four approved vaccines in Canada – Pfizer-BioNTech, Moderna, Oxford-AstraZeneca or Johnson & Johnson – at least 14 days prior to arrival. They will be exempt from quarantine and post-arrival testing unless randomly selected.

“I anticipate that we will find our paths to getting this open together very soon, and I’m very hopeful that’s the case. But remember something, Canada borders one country, that’s the U.S….but the U.S. borders Canada and Mexico and has very extensive international flights and I think the decision for us isn’t just about Canada alone, but how we are going to behave on both sides of our country,” he said on CTV News Channel Tuesday.

Intergovernmental Affairs Minister Dominic LeBlanc reiterated the prime minister’s remarks earlier in the day, noting that Canada won’t “purport” to tell its U.S. colleagues how to proceed at the border.

“That being said, there are ongoing conversations and we expect in the coming weeks that advice to evolve with respect to authorities in Europe and potentially in the United States so we’ll continue to work with them in a collaborative and transparent way,” he said.

With files from The Canadian Press.