You Are Here Home news ‘Trying to find words for this one’: Winnipeg police mourn sudden loss of service dog Banner

The Winnipeg Police Service is saying goodbye to one of its four-legged officers.

Five-year-old Banner, who has served nearly as long as he was alive, died suddenly from a medical issue on Wednesday.

“Trying to find words for this one, but it’s tough,” police spokesperson Const. Jay Murray posted on Reddit.

“Banner and his handler were well-respected and very successful on the streets. It was always great to see them. Their work ethic was second to none.”

The police service posted photos of Banner to Facebook on Thursday morning, announcing his death “with great sadness.”

The Belgian Malinois was one of the service’s model dogs — literally. He was featured in the annual calendar and in a video on tracking.

Banner and his handler also volunteered much of their time in the community, Murray said.

“An example is just the other week, when they came to meet a child who had just finished treatment for leukemia.”

Cassie Maeren witnessed the emotional tribute paid to Banner by officers on Wednesday and posted about it on Facebook.

“I wanted to share something I saw today that has left me feeling a whole mix of emotions,” she wrote, explaining she saw a canine unit pull up to the vet hospital in the city’s Bridgwater neighbourhood.

“Fast-forward an hour or so and tons of other police cars show up at the vet and are parked all around the building. A bunch of officers get out of their cars and are standing at the door to meet the handler, who is walking out with a large box,” said Maeren, who works near to the vet hospital and could see what was happening.

“The handler loads the box into the back of the K-9 unit vehicle and everyone appears to be crying and hugging,” she wrote. 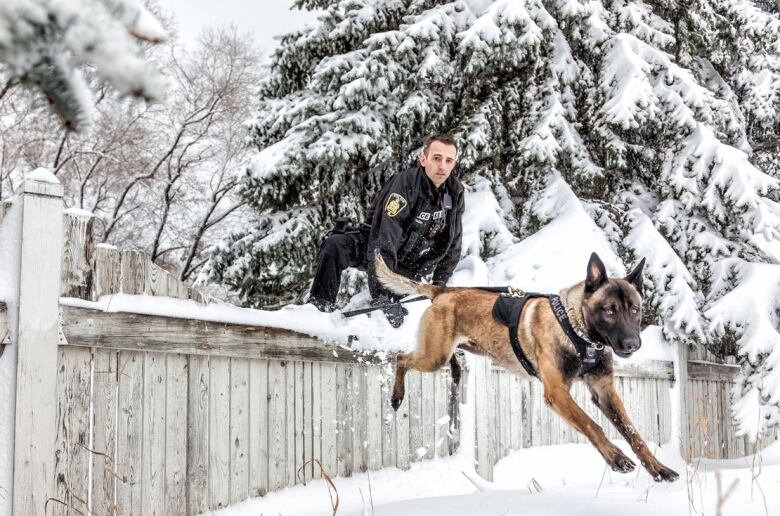 That moment made Maeren’s heart drop into her stomach “because we kind of all realized what had happened. I broke down immediately,” she said in an interview.

As the vehicle holding the box drove off, the lights on every other cruiser turned on and they slowly followed the canine unit down the street, Maeren said.

“It was an absolutely beautiful sendoff. The police service gets a bad rap sometimes, seen as fighting crime and [being] tough guys, but you saw this really soft side to all of these people.

“And you saw someone who just lost his partner and his friend — and his family member. I couldn’t get home fast enough to be with my dogs.”

The police service has said it will release more information about Banner on Thursday afternoon.