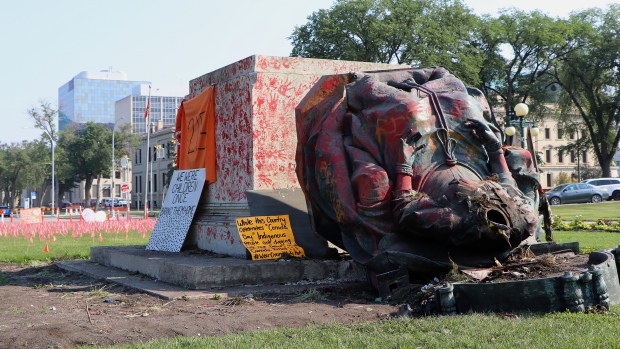 TORONTO — The toppling of statues of Queen Victoria and Queen Elizabeth II in Winnipeg has drawn condemnation from the office of British Prime Minister Boris Johnson.

During the “Cancel Canada Day” marches on the grounds of the Manitoba Legislative Building in Winnipeg on Thursday, the statue of Queen Victoria was covered in red paint and red handprints before being toppled. The head of the statues was also removed and dumped in a river before being retrieved by a kayaker who happened to come by it.

The nearby statue of Queen Elizabeth II outside the Government House, the official residence of Manitoba’s lieutenant governor, was also toppled.

“We obviously condemn any defacing of statues of the Queen,” a spokesperson for Johnson’s office told CTVNews.ca in an emailed statement.

These protests, as well as calls to cancel Canada Day, came amid several discoveries of unmarked graves on the sites of former residential schools.

Most recently, the Lower Kootenay Band said on Wednesday that it had found 182 unmarked graves near a residential school near Cranbrook, B.C.

“Our thoughts are with Canada’s Indigenous community following these tragic discoveries, and we follow these issues closely and continue to engage with the Government of Canada on Indigenous matters,” the spokesperson added.

Other statues that have been toppled amid these discoveries include the statue of James Cook in Victoria, which commemorates the first English explorer to reach the west coast of what is now British Columbia.

Activists toppled the statue of Egerton Ryerson, an architect of the residential school system, in Toronto last month. In addition, statues of Sir John A. Macdonald across the country have been the targets of vandalism as well as calls for removal.

With files from CTVNews.ca’s Cameron French and CTV News Winnipeg.