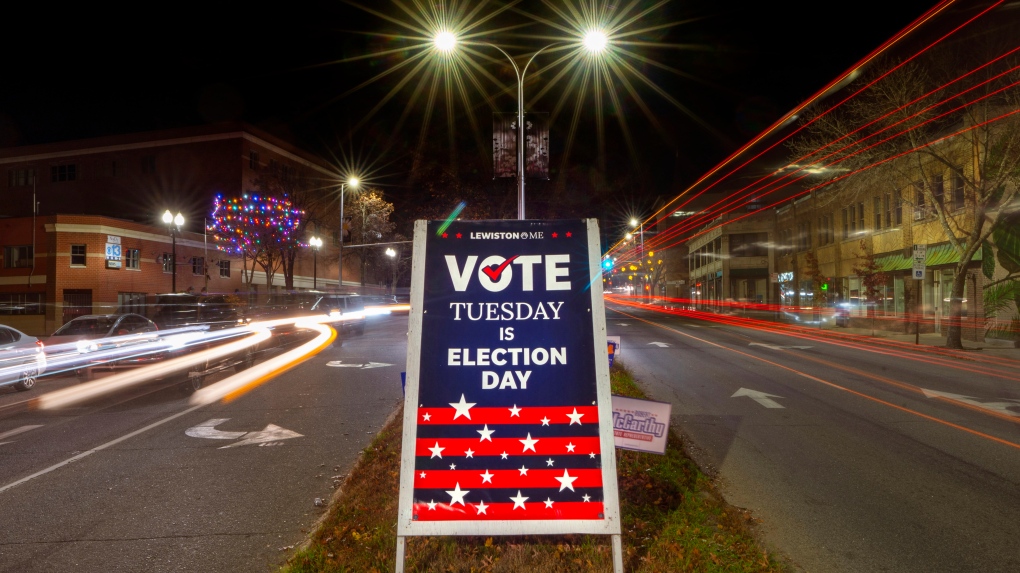 A tumultuous election season that tugged again at America’s searing political divides and raised questions about its commitment to a democratic future comes to a close on Tuesday as voters cast ballots in the first national election of Joe Biden’s presidency.

With polls open, Democrats were braced for disappointing results, anxious that their grip on the U.S. House may be slipping and that their hold on the U.S. Senate — once seen as more secure — has loosened. The party’s incumbent governors in places like Wisconsin, Michigan and Nevada are also staring down serious Republican challengers.

Returning to the White House on Monday night after his final campaign event, Biden said he thought Democrats would keep the Senate but acknowledged “the House is tougher.”

The GOP was optimistic about its prospects, betting that messaging focused on the economy, gas prices and crime will resonate with voters at a time of soaring inflation and rising violence. Ultimately, they’re confident that outrage stemming from the Supreme Court’s decision to eliminate a woman’s constitutional right to an abortion has faded and that the midterms have become a more traditional assessment of the president’s performance.

“It will be a referendum on the incompetence of this administration,” Minnesota Republican Rep. Tom Emmer, who’s running the GOP effort to retake the House, said of the election.

The results could have a profound impact on the final two years of Biden’s presidency. Republican control of even one chamber of Congress would leave Biden vulnerable to a slew of investigations into his family and administration while defending his policy accomplishments, including a sweeping infrastructure measure along with a major health care and social spending package. An emboldened GOP could also make it harder to raise the debt ceiling and add restrictions to additional support for Ukraine in the war with Russia.

If Republicans have an especially strong election, winning Democratic congressional seats in places like New Hampshire or Washington state, pressure could build for Biden to opt against reelection in 2024. Former President Donald Trump, meanwhile, may try to capitalize on GOP gains by formally launching another bid for the White House during a “very big announcement” in Florida next week.

The midterms arrive at a volatile moment for the U.S., which emerged this year from the worst of the COVID-19 pandemic only to confront sharp economic challenges. The Supreme Court stripped away the constitutional right to an abortion, eliminating protections that had been in place for five decades.

And in the first national election since the Jan. 6 insurrection, the nation’s democratic future is in question. Some who participated in or were in the vicinity of the deadly attack are poised to win elected office on Tuesday, including House seats. A number of GOP candidates for secretary of state, including those running in Arizona, Nevada and Michigan, have refused to accept the results of the 2020 presidential election. If they win on Tuesday, they would manage future elections in states that are often pivotal in presidential contests.

Democrats acknowledge the headwinds working against them. With only rare exceptions, the president’s party loses seats in his first midterm. The dynamic is particularly complicated by Biden’s lagging approval, which left many Democrats in competitive races reluctant to appear with him.

Only 43% of U.S. adults said they approved of how Biden is handling his job as president, according to an October poll by The Associated Press-NORC Center for Public Affairs Research. In the same poll, just 25% said the country is headed in the right direction.

Still, Biden’s allies have expressed hope that voters will reject Republicans who have contributed to an extreme political environment.

“I think what we’re seeing now is one party has a moral compass,” said Cedric Richmond, who was a senior adviser to Biden in the White House and now works at the Democratic National Committee. “And one party wants a power grab.”

That’s a message that appeals to Kevin Tolbert, a 49-year-old who works in labor law and lives in Southfield, Michigan. He plans to support Democratic candidates amid worries about the future of democracy.

“It is something that has to be protected and we protect that by voting and being out and supporting our country,” Tolbert said. “It’s a fragile space that we’re in. I think it’s really important that we protect it, because we could end up like some of the things we saw in the past — dictators and such. We don’t need that.”

But in Maryland, where Democrats have one of their best chances to flip a Republican-held governor’s seat, Shawn Paulson said there were “too many questions, not enough investigations” into the results of the 2020 election.

“It shouldn’t be a negative thing or illegal in any way to talk about what you’re going to do to improve security,” said Paulson, a 45-year-old who chairs the Kent County Republicans Central Committee.

Federal and state election officials and Trump’s own attorney general have said there is no credible evidence the 2020 election was tainted. The former president’s allegations of fraud were also roundly rejected by courts, including by judges Trump appointed.

Thirty-four Senate seats are up for grabs with cliffhangers in Pennsylvania, Georgia, Wisconsin and Arizona possibly deciding which party controls a chamber currently split 50-50, with Vice President Kamala Harris as the tie-breaking vote. Democrats are hoping for upsets in Ohio and North Carolina’s Senate contests, while the GOP believes it can oust a Democratic incumbent in Nevada and possibly in New Hampshire.

Republican wins in governor’s races could see states adopt tighter voting laws and ultimately refuse to block efforts to delegitimize the 2024 presidential election should Trump, or any other Republican candidate, lose it.

Amid predictions of a Republican surge, Democrats are hoping that abortion can energize their base while wooing independents and swing voters angered by the Roe v. Wade ruling’s reversal.

“People recognize that this fundamental freedom has been taken away,” said Alexis McGill Johnson, president of Planned Parenthood Federation of America, which teamed up with other Democratic advocacy groups to spend $150 million to mobilize “infrequent” voters for the midterms.

“They see this is an economic issue, a health care issue, a freedom issue,” McGill Johnson added. “And they’re enraged.”

Still, Biden confronted the possibility of presiding over a divided Washington on Monday. As he returned from an event with Wes Moore, the Democratic candidate for governor in Maryland, Biden was asked what his new reality would be if Congress is controlled by Republicans.

(140888)
$17.74 (as of December 4, 2022 10:25 GMT -06:00 - More infoProduct prices and availability are accurate as of the date/time indicated and are subject to change. Any price and availability information displayed on [relevant Amazon Site(s), as applicable] at the time of purchase will apply to the purchase of this product.)

Interesting Facts For Curious Minds: 1572 Random But Mind-Blowing Facts About History, Science, Pop Culture And Everything In Between

(648)
$17.99 (as of December 4, 2022 10:25 GMT -06:00 - More infoProduct prices and availability are accurate as of the date/time indicated and are subject to change. Any price and availability information displayed on [relevant Amazon Site(s), as applicable] at the time of purchase will apply to the purchase of this product.)

(30100)
$45.00 (as of December 4, 2022 10:25 GMT -06:00 - More infoProduct prices and availability are accurate as of the date/time indicated and are subject to change. Any price and availability information displayed on [relevant Amazon Site(s), as applicable] at the time of purchase will apply to the purchase of this product.)

(267)
$15.99 (as of December 4, 2022 10:25 GMT -06:00 - More infoProduct prices and availability are accurate as of the date/time indicated and are subject to change. Any price and availability information displayed on [relevant Amazon Site(s), as applicable] at the time of purchase will apply to the purchase of this product.)

(26327)
$119.96 (as of December 4, 2022 10:25 GMT -06:00 - More infoProduct prices and availability are accurate as of the date/time indicated and are subject to change. Any price and availability information displayed on [relevant Amazon Site(s), as applicable] at the time of purchase will apply to the purchase of this product.)