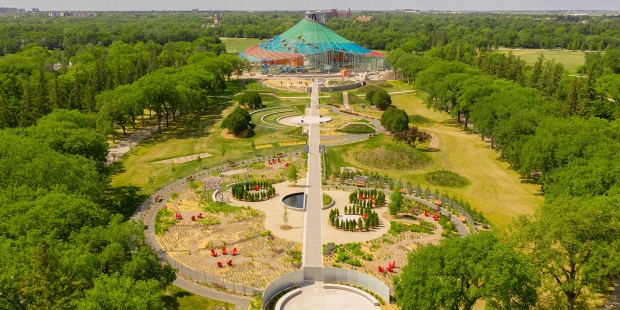 WINNIPEG — The outdoor phase of The Leaf at Assiniboine Park is now open.

The Gardens at The Leaf—comprised of six green spaces planned around a central theme of celebrating cultural and biodiversity—encompasses nearly 30 acres in the southeast corner of Assiniboine Park.

The six areas are called The Indigenous Peoples Garden, Kitchen Garden, Seasonal Garden, Sensory Garden, Performance Garden, and The Grove are “uniquely Manitoban” and each provides visitors with a different experience.

Assiniboine Park Conservancy’s president and CEO says the concept started as a place to make connections between cultures.

“We wanted to design it like a beautiful outdoor community centre,” Margaret Redmond told CTV News.

She said over time, aside from the natural transformation, visitors will start seeing more things happening to “activate the space” like cooking classes, performance art, and educational classes.

“It will become more and more animated over time, and as we learn from the community how they want to use this space.”

The Gardens are free to visit, accessible from a variety of park entrances and, for the most part, open 24 hours a day.

Redmond said usage of Assiniboine Park has surged throughout the pandemic, and thinks it’s been a reminder of the importance of outdoor space.

“It’s nice to see we can add to that enjoyment,” Redmond said. “Let nature do what it does so well—which is make us all feel better.”

The Leaf is the final major phase of Assiniboine Park’s development launched in 2009.

Construction continues on The Leaf’s indoor attraction and Redmond expects it will be ready to open in late 2022.

THE LEAF LINKED TO THREE LAWSUITS

Assiniboine Park Conservancy is involved with three lawsuits related to the indoor portion of The Leaf.

The first lawsuit was filed last week by a subcontractor that did steel work on the project.

Supreme Steel LP, contracted by Bird Construction Group in 2018, alleges it hasn’t been paid for some of the work it completed and states the company is owed $821,978.

Bird Construction Group, the City of Winnipeg, and Assiniboine Park Conservancy are named as defendants in the lawsuit.

Meanwhile, the Assiniboine Park Conservancy has filed two lawsuits of its own.

In June, the Conservancy sued Architecture 49 Inc., as well as KPMB Architects and Blackwell Bowick Partnership Ltd., over issues associated with The Leaf’s cable-net roof design.

The lawsuit said design defects delayed The Leaf’s opening and is related to the cost of remedial work and operational losses.

None of the allegations have been proven in court.

In a statement to CTV News, the Assiniboine Park Conservancy said they encountered delays completing the roof system, but that these issues appear to be behind them.

“There are additional costs related to the issues we encountered with the roof and associated delays. We expect those costs will be covered by the responsible parties and are asking the court for assistance in resolving this matter. This is a necessary step we must take as the owner of the project and to protect the interests of our project stakeholders. This process will play out in due course. In the meantime, the entire project team remains focused on moving the project forward.”