It was as advertised: a coronation for a conquering hero.

Andrew Harris surely felt the love from Winnipeg Blue Bombers fans in Sunday night’s 18-16 win over the Calgary Stampeders, as the face of the franchise and 2019 Grey Cup star made a triumphant return after missing the first three games of the year and played a prominent role in improving the club to 3-1 in this condensed Canadian Football League season.

Sunday’s win had more layers to it than the return of Harris, like a rookie kicker hitting the game winning field goal, to an up-and-down effort by the receiving corps, to the defence holding a team to under 17 points for the third time in four games.

We’ll start with Harris, who rushed 17 times for 81 yards and caught two passes for five yards. His first carry, coming on the Bombers’ first offensive play, covered five yards, and he had the club’s only TD on a two-yard run in the first quarter.

“The team support, the coaching support and the therapy support that got me back on the field, it’s a family here and a brotherhood,” said Harris afterward. “I needed all my brothers to get to this point and going forward we’re going to be doing this as a team.

“I definitely left some stuff out there. There’s always going to be plays that you want back in a game; you’re never going to play a perfect game where you make all the right cuts and all the right reads. But that’s why we watch film and break things down and work on getting better and fixing the mistakes. I missed cuts in the Grey Cup game in ’19 and everyone thought that was the best game ever. There’s always ways to improve and get better and we’ll definitely build off this win.”

Harris gave a boost to the ground game, which had managed just 85 yards total in a two-game split with the Toronto Argonauts. On top of that, just his return to the huddle provided an overall emotional bump for the Bombers.

“More than just the numbers, I thought he was certainly a presence,” said head coach Mike O’Shea. “He ran hard, he made some guys miss, he lowered the shoulder and took hard contact and bounced up. His protection and the confidence in his protection is important. I’ve talked about it before.

“Most importantly, on a personal level him being out here with his teammates was extremely important to him, important to us as a team. It’s fun to watch. We’re all just very pleased for him.”

To that end, by adding 81 more rushing yards to his career total, Harris has inched closer to Joffrey Reynolds and seventh spot on the CFL’s all-time rushing yardage list. Harris is now at 9,119 yards, trailing Reynolds at 9,213. Also within reach is another former Stampeder, Kelvin Anderson, who finished his career at 9,340 yards.

“It felt good to get hit and they’ve got some guys on that defence that can really bring it,” said Harris. “It was great to get out there and just get back in the swing of things. Everything felt great today and I’m just going to keep getting stronger throughout the season. Definitely a positive.” 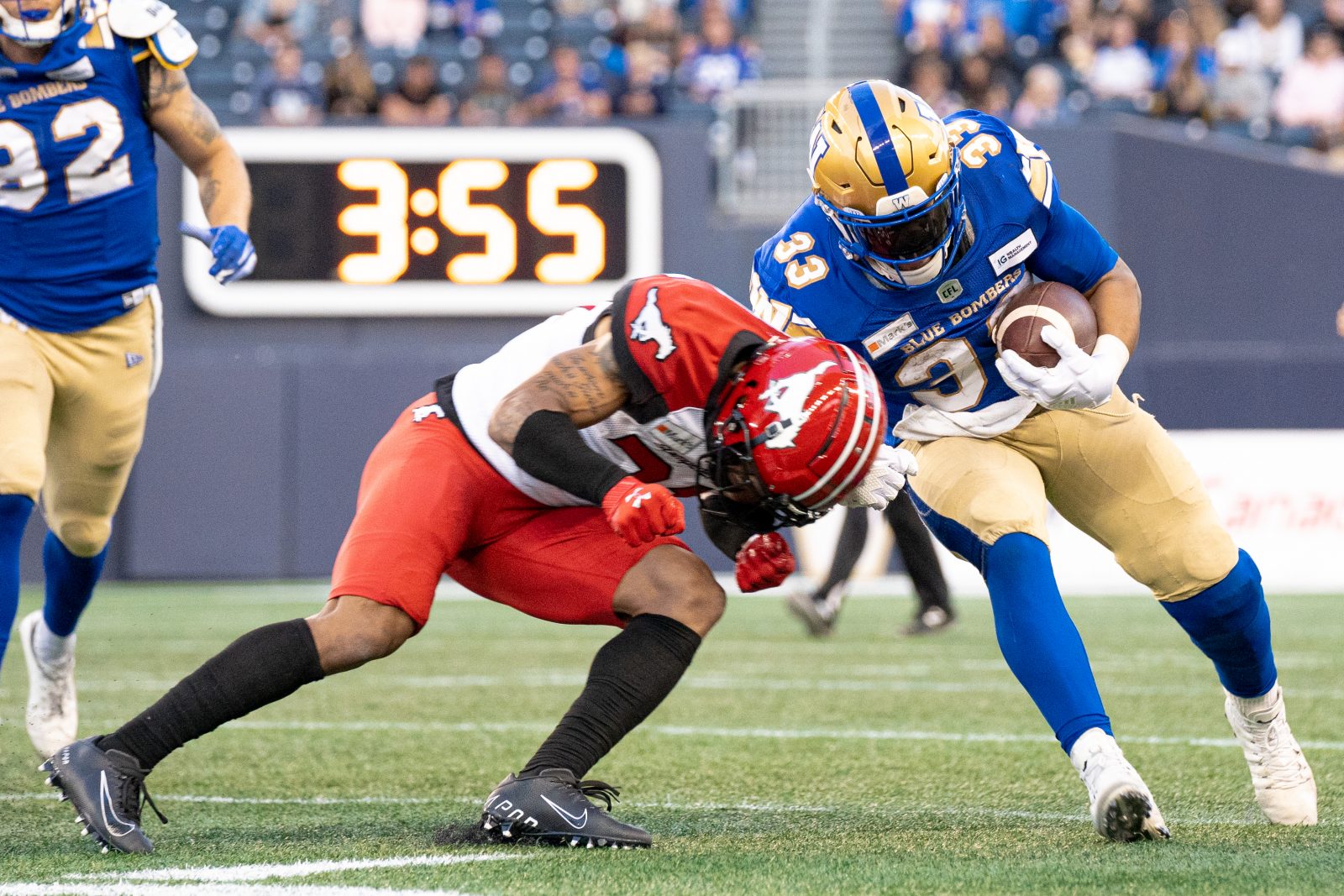 HARRIS HAS ALWAYS PLAYED WITH… a raging inferno churning in his belly and that emotion was on full display from the moment he made his first carry. And, in a lot of ways, a gritty, grind-‘em-out victory was perfect for his return.

“It was a gully game. A dogfight,” said Harris. “There was one point where someone choking me and someone behind me grabbing me and stuff… they’re going to do whatever they can to try and get under your skin. Part of our MO is to fight back and swing back and we did exactly that. We went and got a first down after those two tough runs and we capped it off with a field goal. We’re a team that sticks together. We’re a brotherhood, a family, and when teams do that we’re going to swing right back and keep swinging.

“Yosh (Jermarcus Hardrick) was getting a little upset with me because I was the one kind of stirring it up, too. But I like that kind of stuff to a certain degree. Obviously you don’t want to put yourself into penalty troubles and stuff. But a little bit gets me fired up and gets the boys going and it’s part of the game.”

THE BOMBERS ANNOUNCED MONDAY THE ADDITION… of veteran receiver Naaman Roosevelt. It’s an intriguing add, as the club is bringing aboard a two-time 1K-yard receiver who provides another solid target for Collaros. The announcement had many linking the addition to the number of dropped passes by the receiving corps over the last two weeks, but Roosevelt’s agreement was actually in place before Sunday’s win.

Asked about his club’s execution, with specific reference to the penalty total – eight for 70 yards – and the three drops, O’Shea said:

“I guess it depends on what you call execution. Does a drop count as a lack of execution if they’re in the right place and the ball gets delivered and they’re right there and they’re going to get yards and first downs? I thought we just didn’t finish. There was a lack of finish.

“I do think early on probably four or five drives we ended because we either took a penalty or just didn’t finish the play. We can’t live in that world, obviously. But down in the fourth when it mattered I thought guys came up with some real clutch catches and some first downs in traffic and getting hits. Those are the ones that really matter and we’ll look at the ones that hurt us early and I’m sure everyone will be better.”

Added Collaros when asked about what he might say to the receivers as they struggled through a bout of drops:

“We all make mistakes. Some of them are more magnified than others because they’re easier to see for the casual observer. If I make a bad read, nobody watching the game knows that except the guys in the locker room.

“If someone drops a pass for misses a block, that’s pretty obvious. We all make mistakes. We’ve just got to keep shooting, that’s the bottom line. We’re going to get opportunities to make plays and we’ve just got to keep taking them and making those plays when they come our way. I love our group of guys. I’ll go and fight with those guys every day and we’ll continue to get better as a unit, I promise you that.”

Worth noting was the work of Rasheed Bailey, who had two key second down catches on the eventual game winning drive, and finished with four receptions for 108 yards – his first 100-yard game, while Kenny Lawler still finished with six catches for 94 yards. 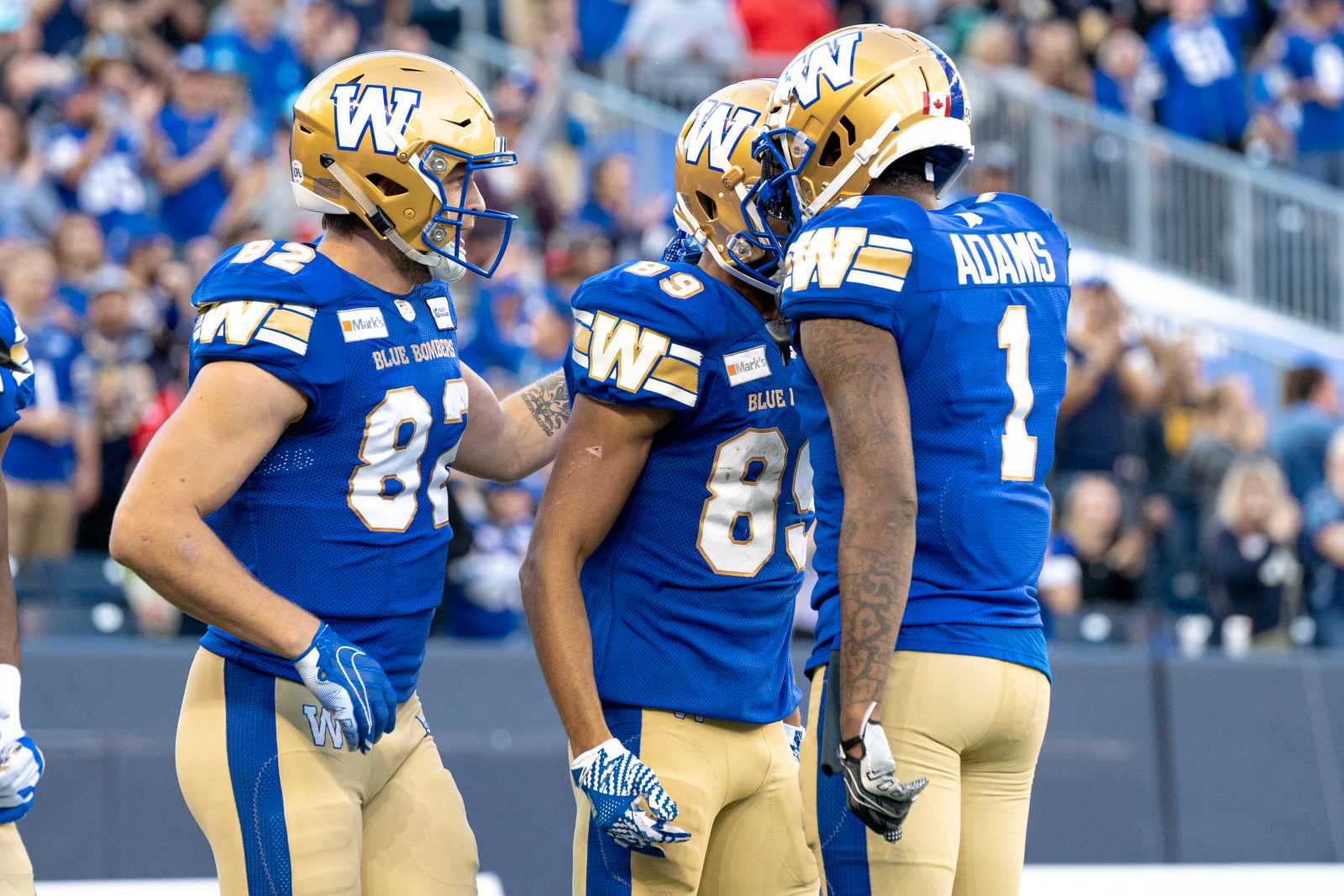 MONDAY WAS BIG ON THE TRANSACTION FRONT… as the Bombers also announced the addition of American kicker Ali Mourtada. He comes to the Bombers after kicking in both the AFL and IFL – indoor football leagues – most recently with the Massachusetts Pirates.

His arrival will come after last week’s injury to Tyler Crapigna and in the wake of Marc Liegghio going 4-for-4 in the field goal department in Sunday’s win, including hitting a 50-yarder on his first try and then nailing the game winner.

That dramatic moment came after his first attempt sailed wide, but with the play whistled dead because of a Bombers time count penalty. That penalty moved the ball back 10 yards before he hit a 45-yarder for the win.

“You’re like, ‘Ah, I just went from there and now I’m moving back another 10 yards.’ It happens,” Liegghio said. “In the end you do the same stroke from wherever yard mark you’re at. It was nice listening to the other team giving it to me saying ‘You’re going to miss, you’re going to miss.’ I take that as energy. And then hitting it, seeing the crowd ignite and the team running out to me is such an amazing feeling. You’ve just got to block all that noise out and do your job at the end of the day.”

“I didn’t even know I was coming up on it. For me it means just consistency. That’s the one word I can put on it. I take it one day at a time, one game at a time and really just focus on my effort and what I can do to prepare and play the best I can for my teammates.

“Where I am now is a culmination of that over my career. That’s the one thing I’m proud of, the way I approach the game and the way I play and the way I come to work every single day. It’s the same mindset, the same focus. Getting here now I never would have thought that back then, but at this point as I look back that’s what I like about it.”

(3159)
$3.99 (as of September 27, 2021 10:42 GMT -05:00 - More infoProduct prices and availability are accurate as of the date/time indicated and are subject to change. Any price and availability information displayed on [relevant Amazon Site(s), as applicable] at the time of purchase will apply to the purchase of this product.)

(919)
$22.98 (as of September 27, 2021 10:42 GMT -05:00 - More infoProduct prices and availability are accurate as of the date/time indicated and are subject to change. Any price and availability information displayed on [relevant Amazon Site(s), as applicable] at the time of purchase will apply to the purchase of this product.)

It Ends with Us: A Novel

(19625)
$14.71 (as of September 27, 2021 10:42 GMT -05:00 - More infoProduct prices and availability are accurate as of the date/time indicated and are subject to change. Any price and availability information displayed on [relevant Amazon Site(s), as applicable] at the time of purchase will apply to the purchase of this product.)

(111)
$11.99 (as of September 27, 2021 10:42 GMT -05:00 - More infoProduct prices and availability are accurate as of the date/time indicated and are subject to change. Any price and availability information displayed on [relevant Amazon Site(s), as applicable] at the time of purchase will apply to the purchase of this product.)

(39)
$198.24 (as of September 27, 2021 10:42 GMT -05:00 - More infoProduct prices and availability are accurate as of the date/time indicated and are subject to change. Any price and availability information displayed on [relevant Amazon Site(s), as applicable] at the time of purchase will apply to the purchase of this product.)