There are any number of ways to dissect the Winnipeg Blue Bombers’ first loss of 2022 and – it’s worth noting here amid the overreaction in some corners – their first defeat in almost a full calendar year which actually could impact their place in the standings.

Kicker Marc Liegghio will be under the microscope again after whiffing on a 31-yard potential game-winner with no time left and then clanging one off the upright from 37 yards out in Thursday’s 20-17 overtime loss.

There will be, rightfully, criticism about the protection in front of Zach Collaros, about some uncharacteristic and ill-timed penalties, about the many, many plays left unfinished to a scrappy Montreal Alouettes side that over the last two weeks has looked far superior to a team with a now 3-6 record. Still, if we can just zoom out for a moment and resist the urge to make knee-jerk summations, here’s the view from this perch, for what it’s worth: The Blue Bombers simply looked plumb tuckered out.

They’d never admit as much publicly – or likely not even after being injected with a vat of sodium pentothal – but Thursday night’s effort flashed all the evidence of a team operating on fumes after going 10 straight games without a break. 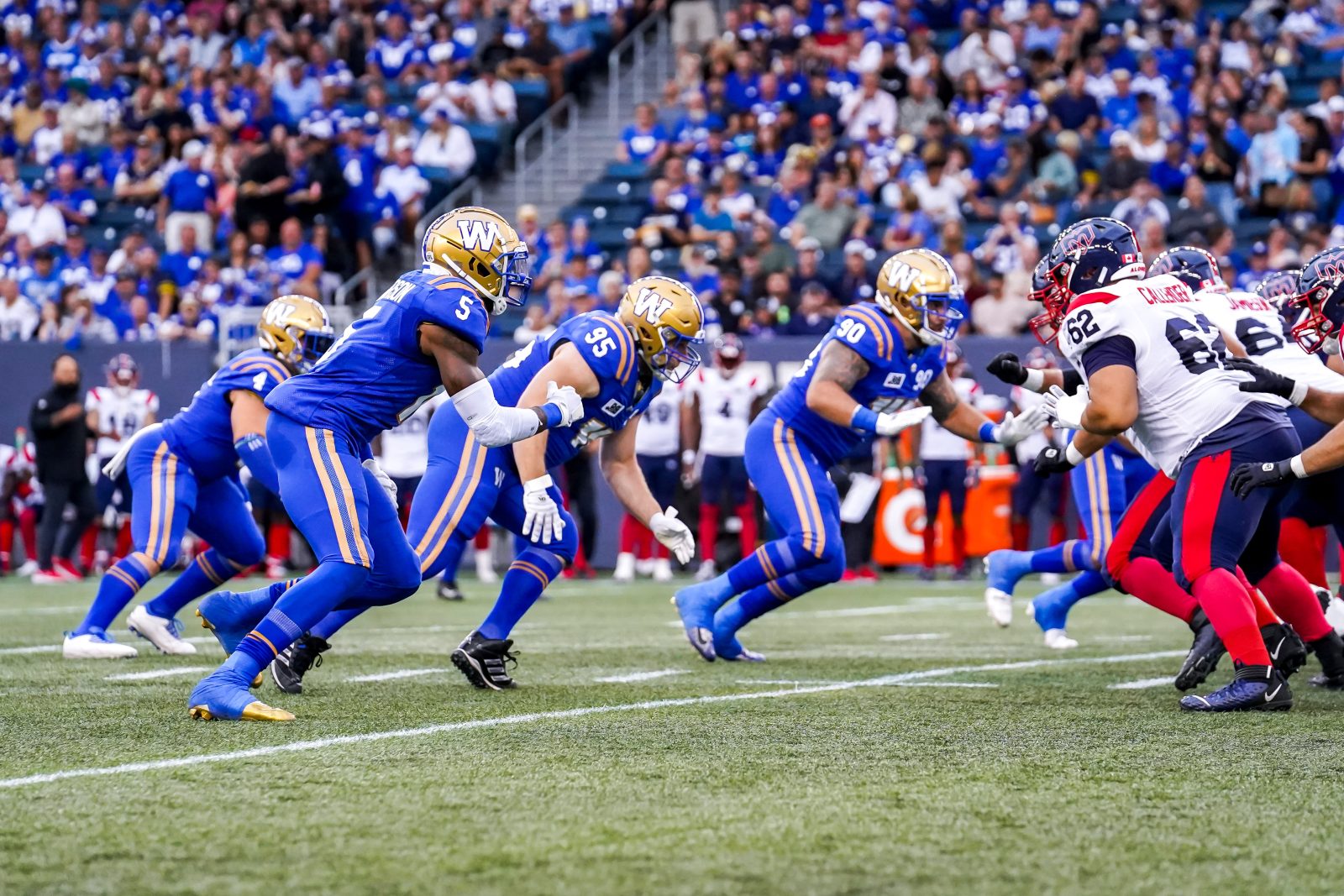 The Blue Bombers now head into their first bye week of the season after going through a hellacious stretch that saw them play of five of six on the road – including three straight away from IG Field – that also included six games in 32 days. The toll of that, it says here, was on display for spells last week in Montreal and again Thursday.

Again, those exact words would never come out of anyone’s mouth in Bomberland, although there were hints of it after the loss.

“I just don’t know that we had a ton of energy across the board,” said head coach Mike O’Shea after the game. “We still went into halftime 7-7 and in the first quarter it looked like nobody wanted to win it. Once again, early on in the game we just didn’t have a lot of ‘pop’. I think that’s par for the course maybe this week.”

Asked if the loss would impact the club’s first breather since training camp, O’Shea quipped:

“Yeah, I’ve cancelled all their plane tickets home and everybody’s going to be staying here grinding. No… there’s nothing like that. It’s not punishment.

“We lost one game. What I need them to do is not punish themselves. I need them to move on very quickly and make sure they have a bye week that they can relax and get refreshed so they come back in a good frame of mind ready to go.” 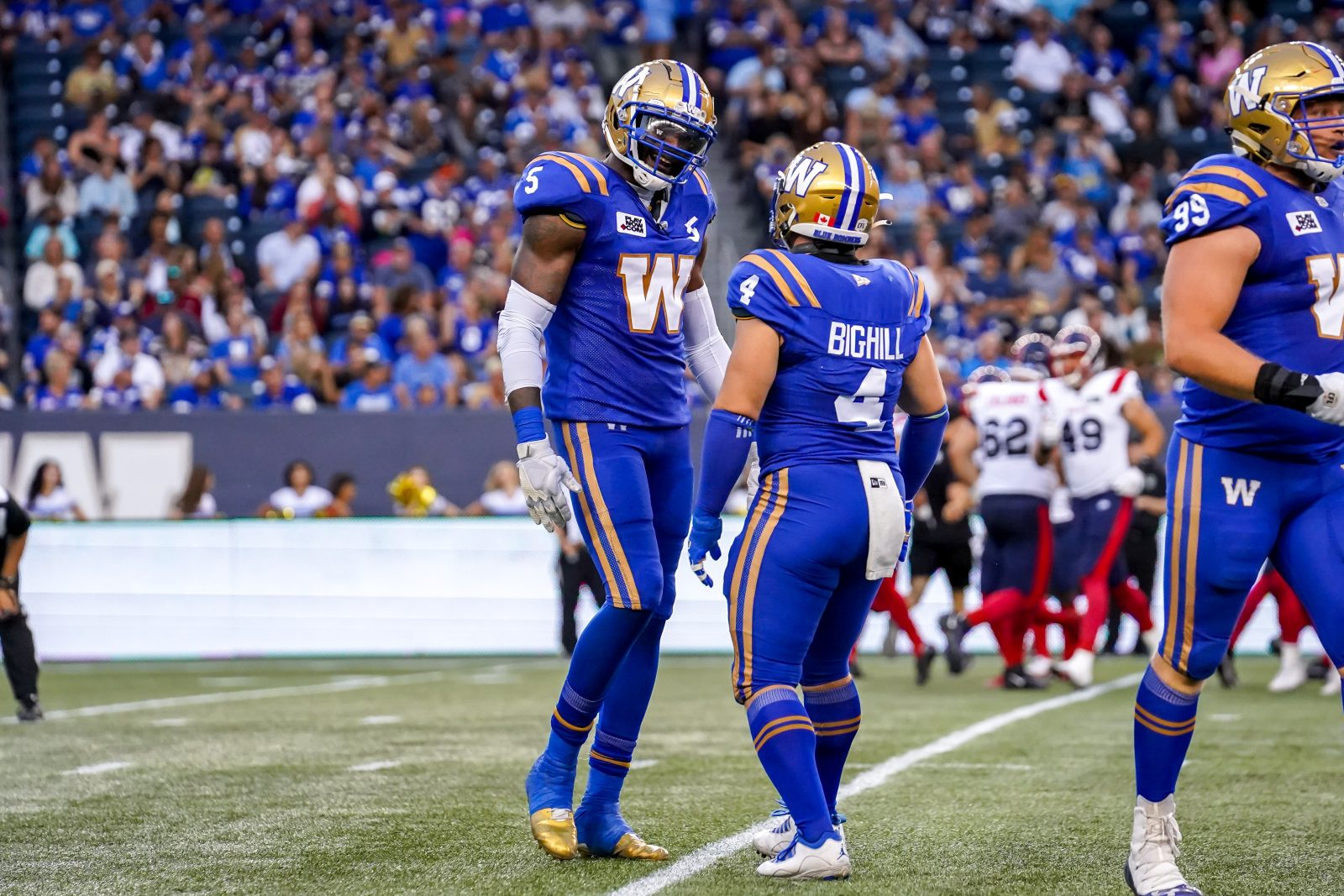 ONE MORE ON THE BYE WEEK THING… without belabouring it too much further: every team has enjoyed one bye week before the Blue Bombers, with three teams – the Toronto Argonauts, Calgary Stampeders and B.C. Lions – having already had two.

“We don’t want to carry this one into the bye,” said quarterback Zach Collaros. “We really need to use it to get healthy, to get fresh, all those things. You don’t go into a season without this being in the back of your mind the entire time. We’ve got to find an edge during the bye and come back a couple percentage points better. We are excited to get a little rest.”

Went to bed feeling like we lost the Grey Cup. Woke up realizing we lost just our 1st game in 10 weeks.

IT COULDN’T HAVE BEEN FUN, BUT CREDIT MARC LIEGGHIO… for facing the music after missing his two kicks because some players would have refused to do post-game interviews after a night like that.

Liegghio saw his field goal percentage drop from 90 percent to 82.6 with the two misses. What’s concerning is his misses have come in bunches. He had hit 13 straight field goals before missing his last two tries – and a convert – in the win over B.C. and had his six straight before the two misses against Montreal.

“He’ll be fine,” said head coach Mike O’Shea. “Listen, he’s been kicking at a very high rate. He came back this year, his second year, and had developed his game and has turned into a good pro as a lot of guys do in their second year. His progression has been right on time.

“Maybe this is that little something that’s right on time, too, that will help him later. He’ll bounce back and be good.”

O’SHEA WAS ASKED POST-GAME IF HE CONSIDERED… having Liegghio punt for the single in regulation, a notion that some second-guessers have floated in the wake of the loss. It’s too easy to debate the ‘strategy’ of that. The expectation is that your kicker – who had already hit a 45-yard field goal in the third quarter – would hit from 31 yards away or at least get enough of the kick to have it sail through the back of the end zone for the game-winning rouge.

Liegghio was frank about mishitting the kick and said this of the reaction from his teammates:

“My teammates are the best people in the world. I wouldn’t want to be playing with any other people. These guys are family. The coaching staff, everyone is just amazing. I love playing with these guys. I love being in the change room. It feels like I’m at home every day. That’s how it felt like after the game.

“Everyone gave me a high five and said, ‘Hey, you’re good. Don’t you worry.’ And I’m like, ‘I know. I’ve got you guys, and everyone’s got each other’s back.’ I just love my team so much.”

As to what he might be thinking the next time he is in a similar situation he added:

“I’m just going to bang it through the uprights and win us the game.” 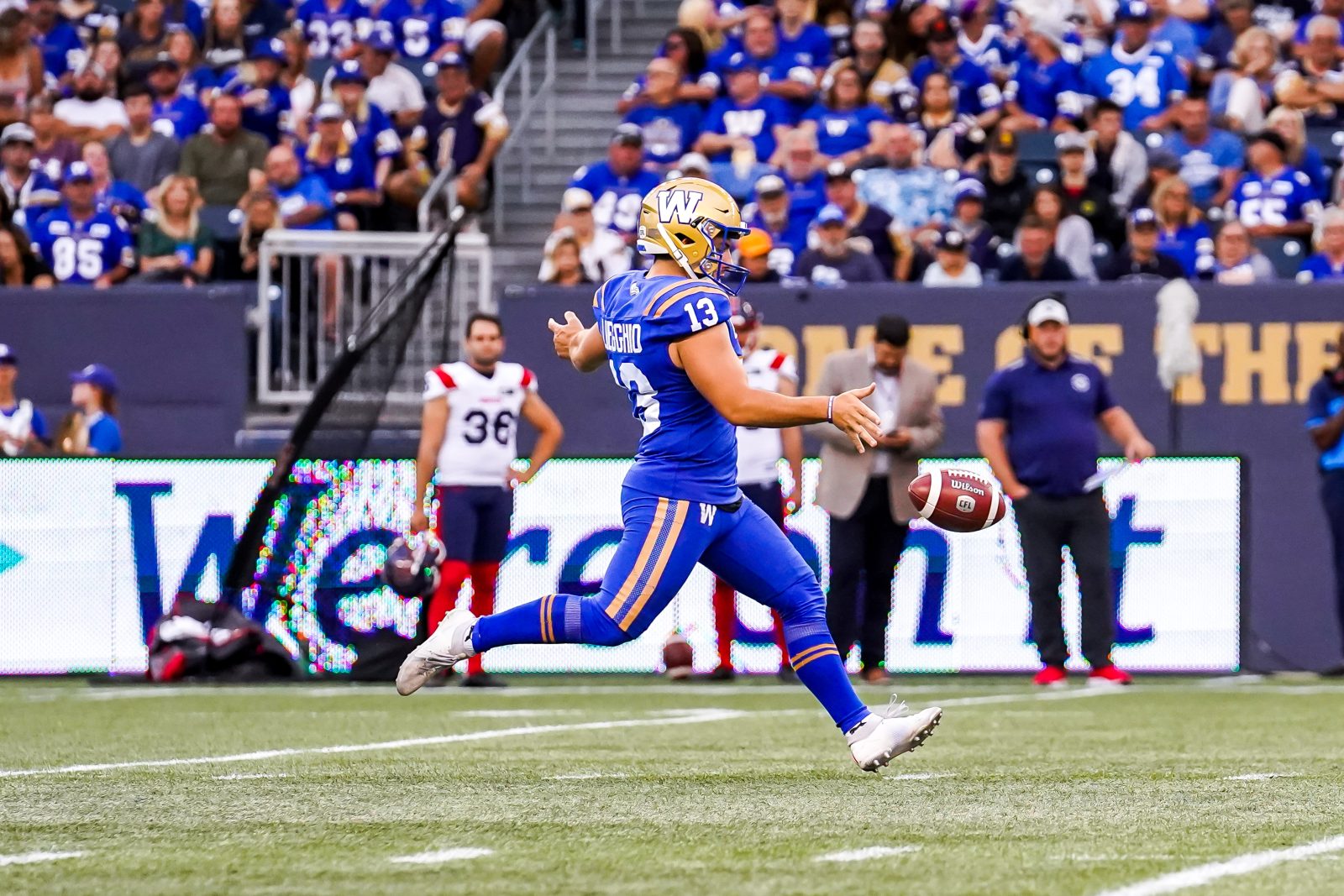 AN EXPECTED NARRATIVE THAT CAME IN THE AFTERMATH… of the first Blue Bombers loss of season is the notion that this was a ‘good time to lose’ or the ‘there are more valuable lessons to learn after a loss than a win.’ Two takes on that, first from O’Shea:

“I think we’ve lost enough games over the last pile of years for us to understand what they need to do. We look very closely at reasons why you win and why you lose. We’ve seen all that before, just like as we’ve won games differently throughout the course of this year where everybody’s talking about ‘Oh, you’re resilient this or that must have been a good lesson.’ Well, they’ve learned those lessons quite some time ago.

“I don’t think we need to lose to learn lessons. They’ve done that before, right? This is just a game we didn’t make enough plays. Everyone knows why, so move on, flush it and have a good bye week.”

“There are always things to learn when you win or lose. I think we’ve been a good team learning while winning. You’ve got to take that even more when you lose. When you win somethings don’t seem as painful because you get away with the win. But when you lose and you make mistakes, those hurt a lot more, so they naturally make guys change behaviour or focus more and we usually get a better response when you come off a loss. We’ve got to be better.” 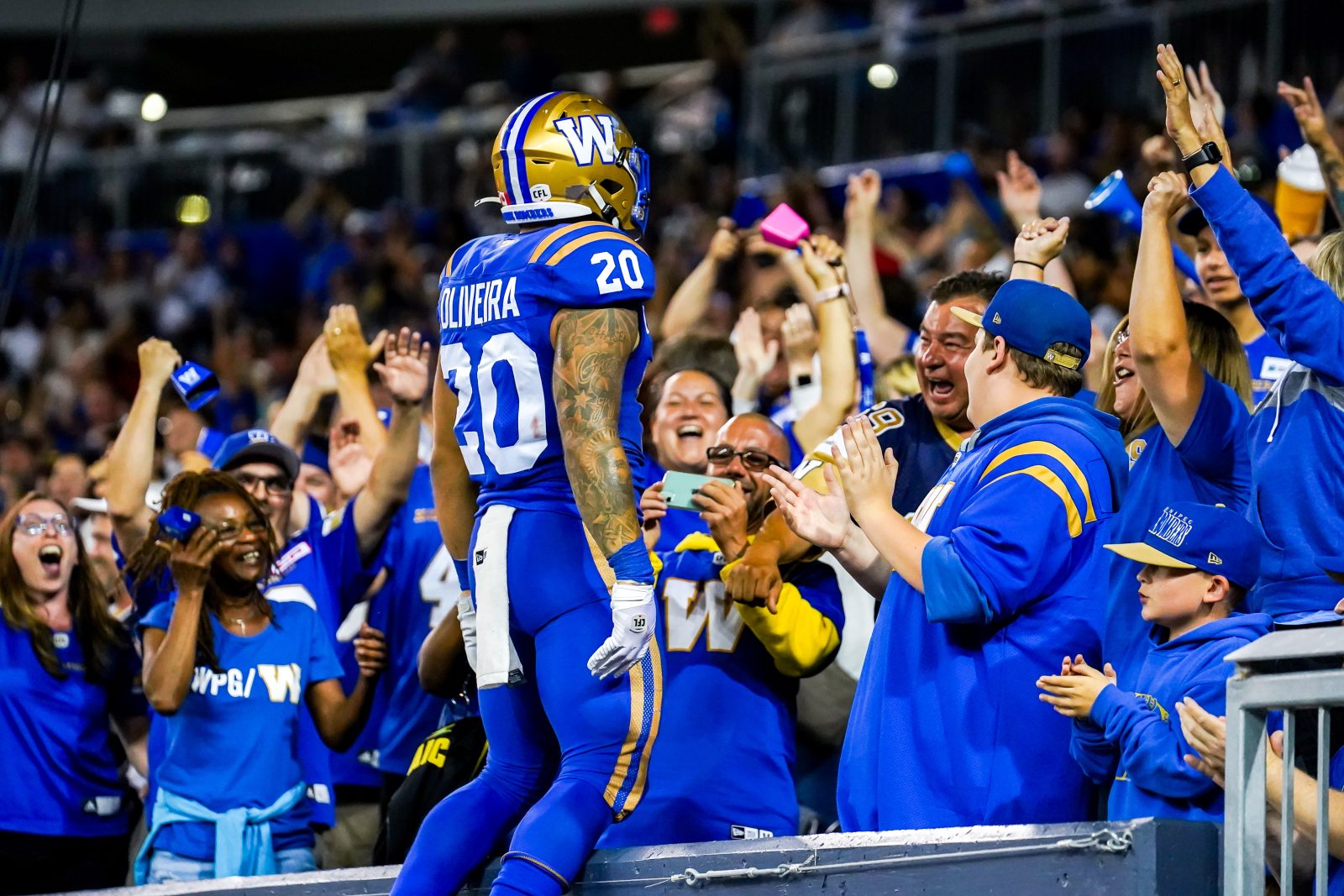 BIGHILL, AS ALWAYS, OFFERS THE MOST HONEST AND REASONED… responses post-game, win or lose. That was the same Thursday.

“You’ve got chances to make plays throughout the game. It never comes down to the end, that last play,” said Bighill. “There are plays where we could have won the game earlier. It’s the little details you’ve got to learn from. You’ve got to play a clean game and those kinds of things can bite you if you don’t.

“It didn’t go our way. We didn’t make the plays when we needed to in critical situations and the end of the game came down to a kick, but it should never have come down to that last play. We could have solved it earlier.”

AND, FINALLY… one more from Bighill, when asked if the loss will stick with him and his teammates through the bye week.

“We have to go into the next prep week fresh, learn from our mistakes and be ready to go out there and your next brand of best football that you have. I know that’s what we’re focused on. Guys will let this sting for a day, and we’ll move on, we’ll learn, and we’ll get better.”

(4084)
$16.99 (as of September 24, 2022 10:44 GMT -05:00 - More infoProduct prices and availability are accurate as of the date/time indicated and are subject to change. Any price and availability information displayed on [relevant Amazon Site(s), as applicable] at the time of purchase will apply to the purchase of this product.)

(192)
$112.13 (as of September 24, 2022 10:44 GMT -05:00 - More infoProduct prices and availability are accurate as of the date/time indicated and are subject to change. Any price and availability information displayed on [relevant Amazon Site(s), as applicable] at the time of purchase will apply to the purchase of this product.)

(2698)
$8.98 (as of September 24, 2022 10:44 GMT -05:00 - More infoProduct prices and availability are accurate as of the date/time indicated and are subject to change. Any price and availability information displayed on [relevant Amazon Site(s), as applicable] at the time of purchase will apply to the purchase of this product.)

(10288)
(as of September 24, 2022 10:44 GMT -05:00 - More infoProduct prices and availability are accurate as of the date/time indicated and are subject to change. Any price and availability information displayed on [relevant Amazon Site(s), as applicable] at the time of purchase will apply to the purchase of this product.)

(8312)
$25.99 (as of September 24, 2022 10:44 GMT -05:00 - More infoProduct prices and availability are accurate as of the date/time indicated and are subject to change. Any price and availability information displayed on [relevant Amazon Site(s), as applicable] at the time of purchase will apply to the purchase of this product.)