It was a night tailor-made for big moments, to see who can shine, who can grab the spotlight and who can advance to the next round.

Call it ‘Football Idol’, if you will.

And in Friday night’s preseason tilt between the Winnipeg Blue Bombers and Edmonton Elks – a 30-20 victory for the antlered crew – one of 150-or so players who made some wonderful music was quarterback Dru Brown.

Starting in place of Zach Collaros, as the CFL’s reigning Most Outstanding Player got the night off, Brown was sensational in completing 10-of-13 passes for 108 yards and a TD-strike to Dalton Schoen, while also running for a score. And to be frank, he looked infinitely more polished than the QB we saw in the regular season finale in Calgary last year who completed 7-of-14 for 49 yards and rushed seven times for 44 yards in his only real action as a rookie.

As he said afterward: “I was seeing the pictures well and that’s kind of what I wanted to show the staff.” 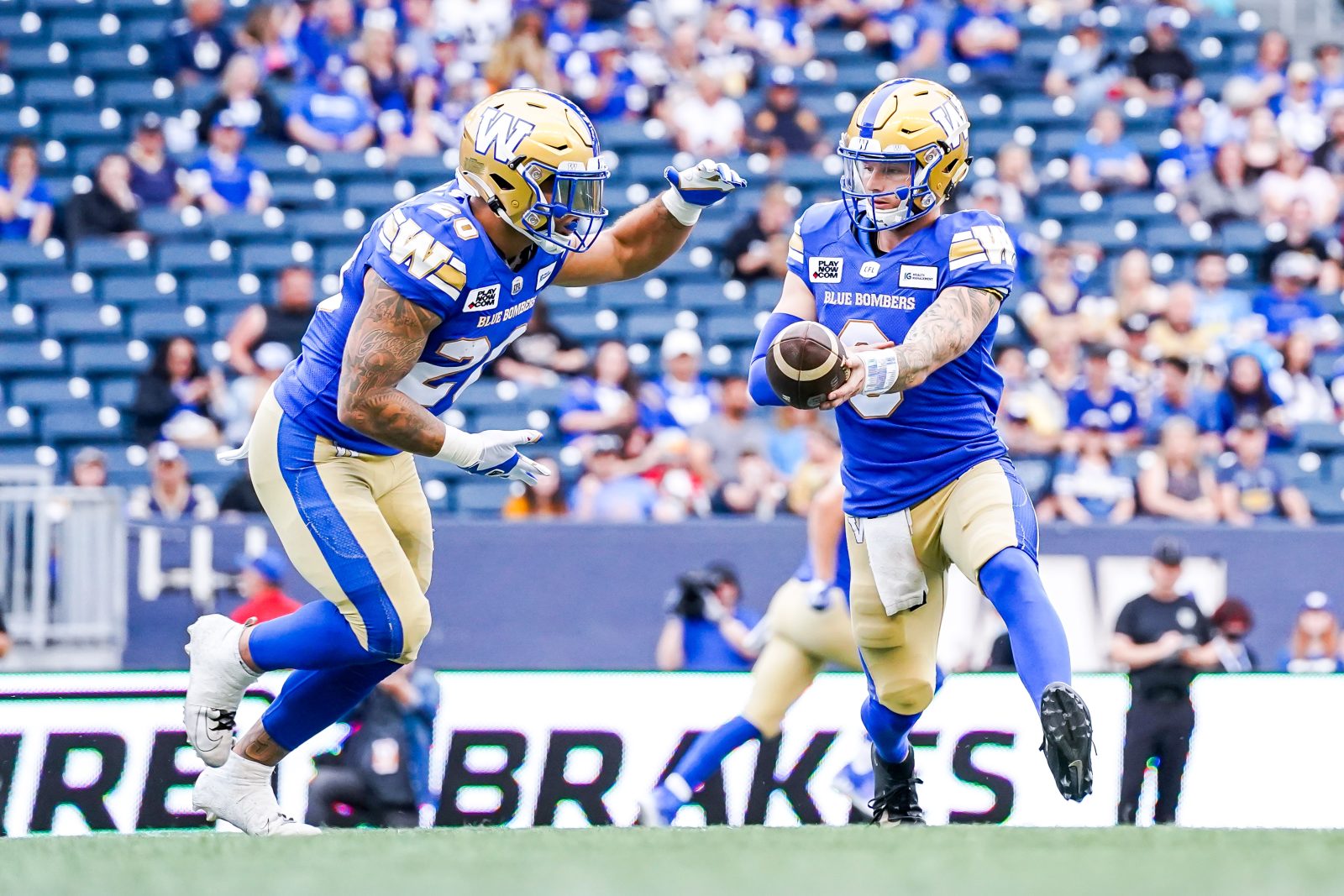 Brown is an intriguing prospect for the Blue Bombers. We introduced him to fans last fall prior to the game against the Stampeders and his story is all about scrapping and clawing for his opportunities, from the College of San Mateo to Hawai’I to Oklahoma State to Winnipeg.

He’s not big – he’s officially listed at 5-11, 195 – yet he moved around the pocket effectively against the Elks and there was a poise and confidence to virtually every decision he made.

Brown is battling veteran Dakota Prukop for the No.2 QB gig behind Collaros. Both men split the work against the Elks, working with a variety of receivers and behind different offensive line combinations. Prukop finished 5-of-14 for 81 yards with two interceptions while rushing three times for 18 yards and a TD.

Asked if he thought he helped his cause with his work, Brown said only:

“That’s not my decision to make. Obviously as a competitor I want to be that guy, but like I said (that decision) is not my job.” 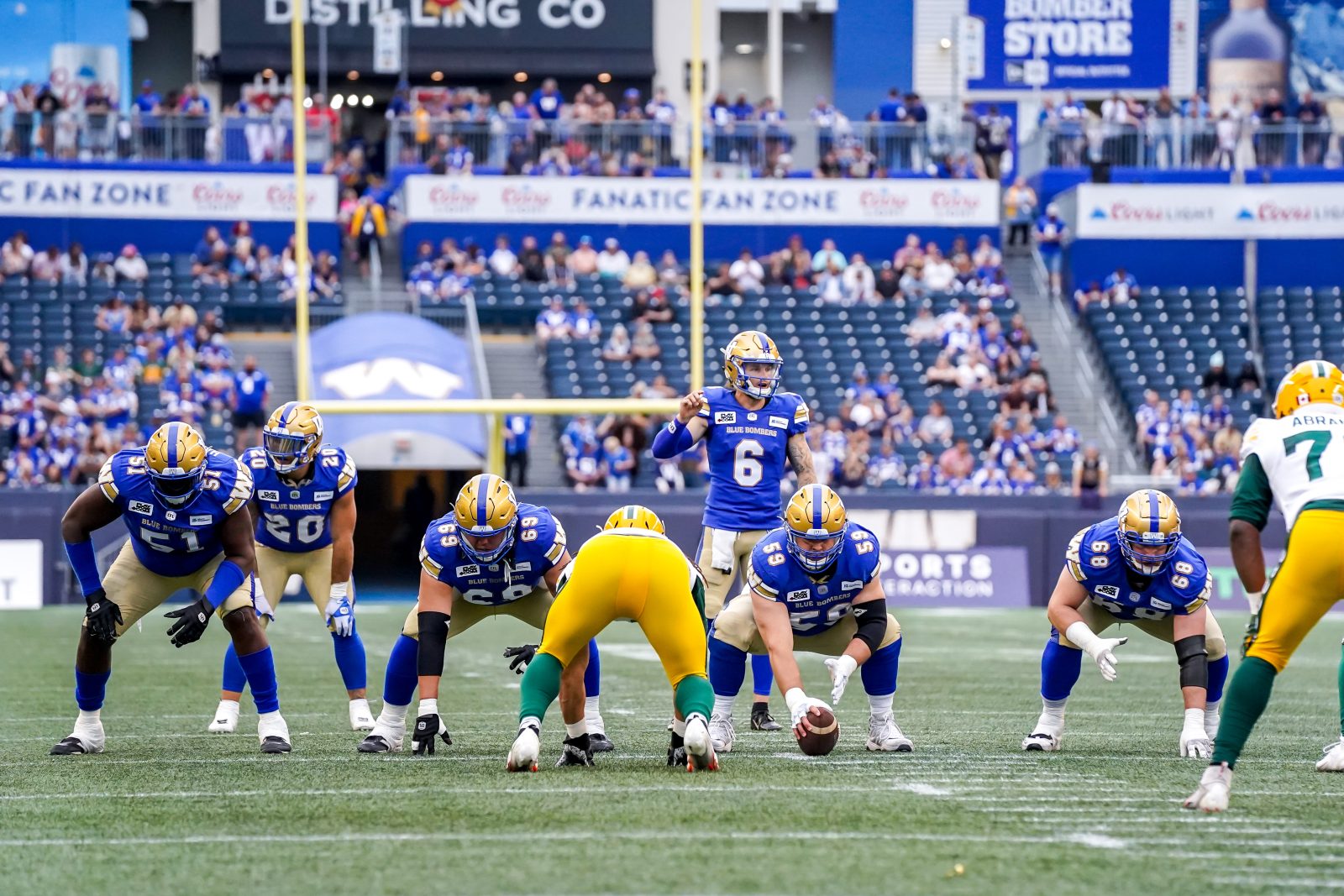 That said, he has momentum heading into Tuesday’s second and final pre-season game against the Saskatchewan Roughriders in Regina.

“It’s pretty obvious there’s a competition (for the No. 2 job),” Brown said. “And as much as you try and treat it like any other game, obviously Dru Brown doesn’t drop back 20 times every week because Zach Collaros does.

“So, these games are really valuable to see the pictures and get game action, but you’re also fighting for a job just like the other 70-something guys in there. That’s my mindset with it. You try not to over-think it, you try and just play ball but, obviously, when you’re trying to get your foot in the door in this league these opportunities are pretty big.

“I’m just trying to take it one day at a time, do my job and I just want them to trust me with the ball in my hands.”

NOW COMES THE TOUGH PART… for Blue Bombers coaches and management as they begin to shave the roster leading up until the season opener June 10th at IG Field against the Ottawa RedBlacks.

Exempt from the first round of cuts are Blue Bombers draft picks this year, and 2021 picks like running back Kyle Borsa and defensive back Patrice Rene who returned to school. One player who stepped up Friday was receiver Dalton Schoen, who began getting a lot of work with the offensive starters last week when veteran Greg Ellingson was rested.

Schoen finished with four catches for 27 yards and his TD reception from Brown.

“It was fun to get back out there,” Schoen said. “It’s been a while since I played in a real game. Obviously you’d want to win the game. It’s pre-season but at the end of the day you’re playing football and you want to go out there and win.

“But overall, it was good to get my feet wet a little bit, get out there and go against a different defence than our own. I got fortunate to have the ball come my way a couple times and I was trying to make some plays do whatever I could to prove myself and help the team win. It was definitely a good feeling (to score a touchdown)… that’s a fun experience for me.”

Schoen said Friday’s game was valuable for him to nail down the timing of the waggle and fully understand the size of the field, along with the goalposts being at the front of the end zone and not at the back, as they are in American football. 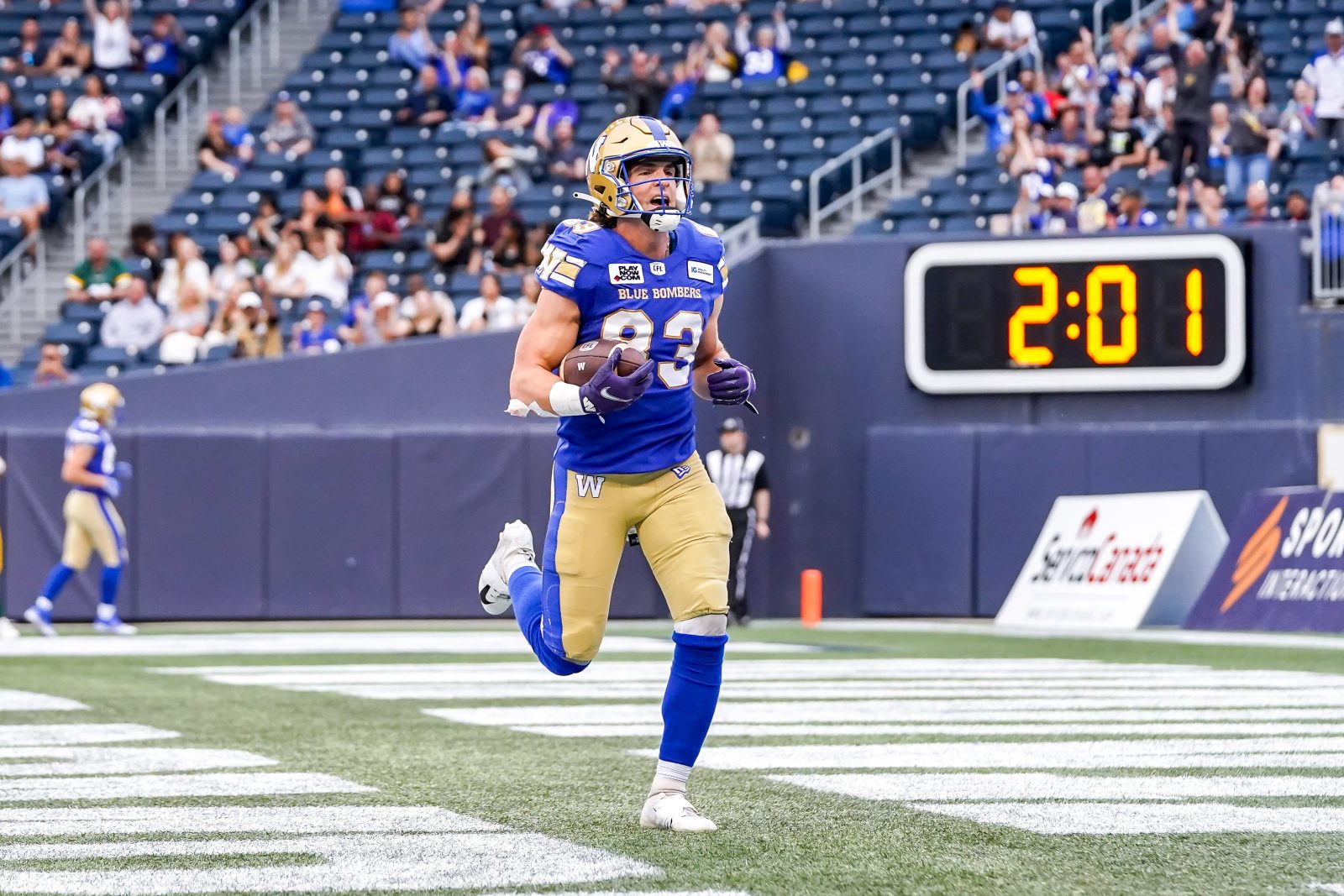 The Blue Bombers have Rasheed Bailey, Drew Wolitarsky and Nic Demski returning as starters along with Ellingson, and have been impressed with Canadian Brendan O’Leary-Orange in camp.

That puts Schoen in a mix with a group that also includes ace returner Janarion Grant. And Schoen understands opportunity, as we told you in this piece during rookie camp.

“And now you come up here and professional football is kind of the same thing – you’re the bottom guy on the depth chart and you’ve got to fight and claw for everything you get and when you get that one opportunity, you’ve got to make the most of it and hope that turns into more opportunities.” 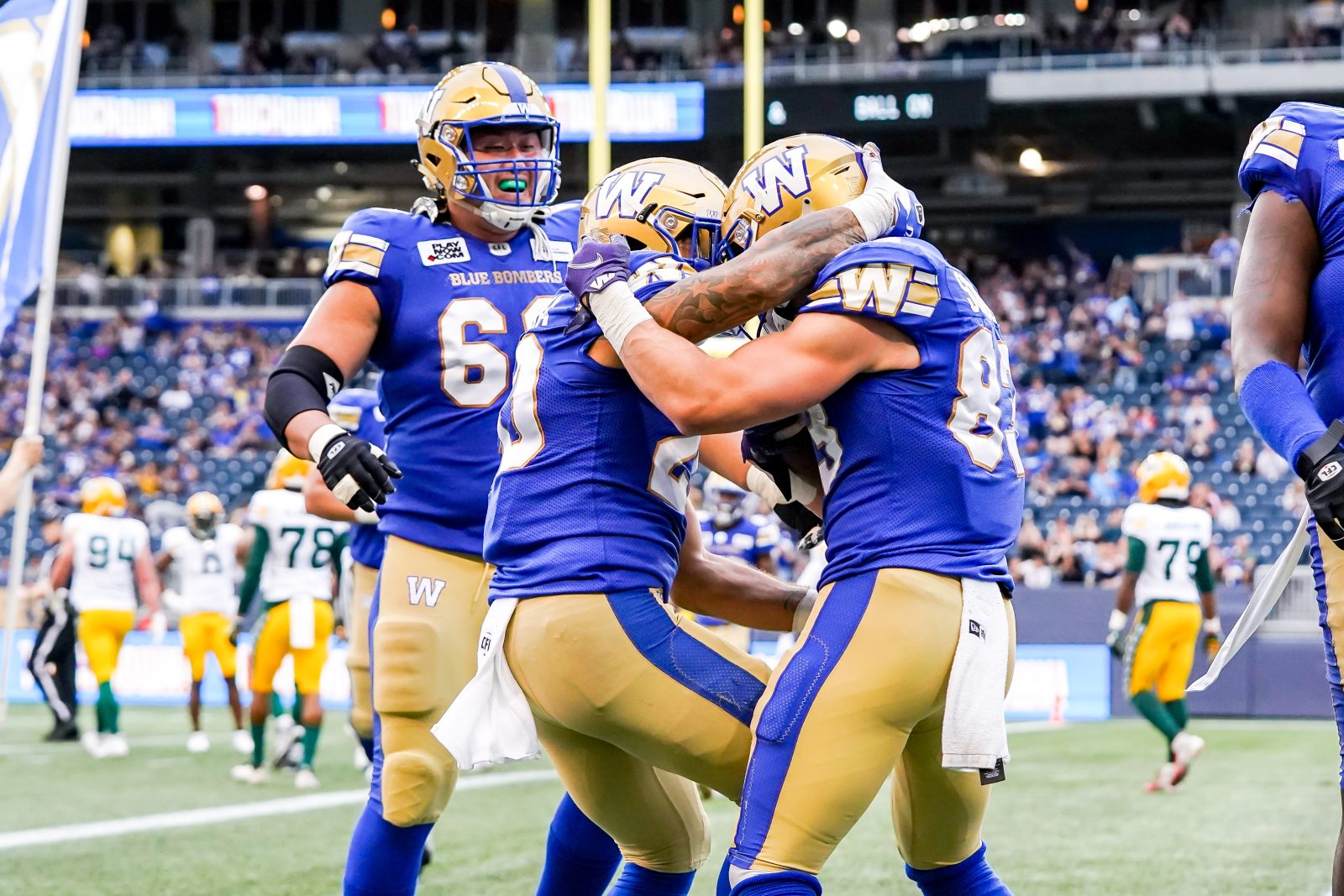 BLUE BOMBERS HEAD COACH MIKE O’SHEA… was one of the CFL’s toughest hombres during his hall of fame career, and he appreciates the physicality of the game as much as anyone.

There was no pre-season last year with the shortened schedule, and he would have admired the work of linebacker Malik Clements – who had four tackles, two more on special teams and a sack – as well as the work of safety Malcolm Thompson, who added three tackles, a tackle for loss and a forced fumble.

“We got a couple of nice hits out of the free safety spot… one in the backfield, one causing a fumble from Malcolm,” said O’Shea. “I think he has that in him so that was nice to see.”

AND, FINALLY, THE BOMBERS DEFENCE DIDN’T… dress their full crew Friday, but Adam Bighill set the tone with a sack on the Elks’ very first snap of the game.

It’s been a nutty few months for Bighill as a father of three, a financial analyst and a CFL Players’ Association Vice President who had a prominent role in negotiating a new collective bargaining agreement that wasn’t signed off on by the collective until Thursday.

That’s a ton for one man to have on his plate.

(4407)
$6.97 (as of June 30, 2022 10:08 GMT -05:00 - More infoProduct prices and availability are accurate as of the date/time indicated and are subject to change. Any price and availability information displayed on [relevant Amazon Site(s), as applicable] at the time of purchase will apply to the purchase of this product.)

He Who Fights with Monsters 6: A LitRPG Adventure

(67)
$6.99 (as of June 30, 2022 10:08 GMT -05:00 - More infoProduct prices and availability are accurate as of the date/time indicated and are subject to change. Any price and availability information displayed on [relevant Amazon Site(s), as applicable] at the time of purchase will apply to the purchase of this product.)

(58)
$43.99 (as of June 30, 2022 10:08 GMT -05:00 - More infoProduct prices and availability are accurate as of the date/time indicated and are subject to change. Any price and availability information displayed on [relevant Amazon Site(s), as applicable] at the time of purchase will apply to the purchase of this product.)

(177576)
$20.02 (as of June 30, 2022 10:08 GMT -05:00 - More infoProduct prices and availability are accurate as of the date/time indicated and are subject to change. Any price and availability information displayed on [relevant Amazon Site(s), as applicable] at the time of purchase will apply to the purchase of this product.)

(1386)
$6.42 (as of June 30, 2022 10:08 GMT -05:00 - More infoProduct prices and availability are accurate as of the date/time indicated and are subject to change. Any price and availability information displayed on [relevant Amazon Site(s), as applicable] at the time of purchase will apply to the purchase of this product.)