Check out the Canadian Football League standings today and you’ll notice an ‘X’ – as in, ‘clinched playoff spot’ – beside the Winnipeg Blue Bombers.

Funny thing about that ‘accomplishment’ and some post-Labour Day Classic observations that say everything about this squad and its big-picture expectations: First, as Zach Collaros, Willie Jefferson, Nic Demski, Marc Liegghio and Mike O’Shea stepped up to do post-game media interviews Sunday after a 20-18 win over the Saskatchewan Roughriders, not one mentioned clinching a playoff spot until yours truly brought it up with Demski at the end of his session.

In case you missed our game recap, Demski said: “I didn’t know that until now. That’s huge. That’s what you play football for, to go play in the playoffs. That puts a smile on my face right now.”

And then later Sunday night as the second of the two team charter flights returned home, the subject of nailing down a spot in the Grey Cup derby wasn’t even broached in any conversations overheard during the trek. That’s on point, of course, for a club that will be all about this week’s Banjo Bowl and not anything scheduled for later this month, next month or into November.

Still – and we’ve done this before in this space this year – it’s perfectly acceptable for the rest of us outside that locker room to take the time to savour this success, even just a little bit, and especially in wake of a second consecutive LDC victory. 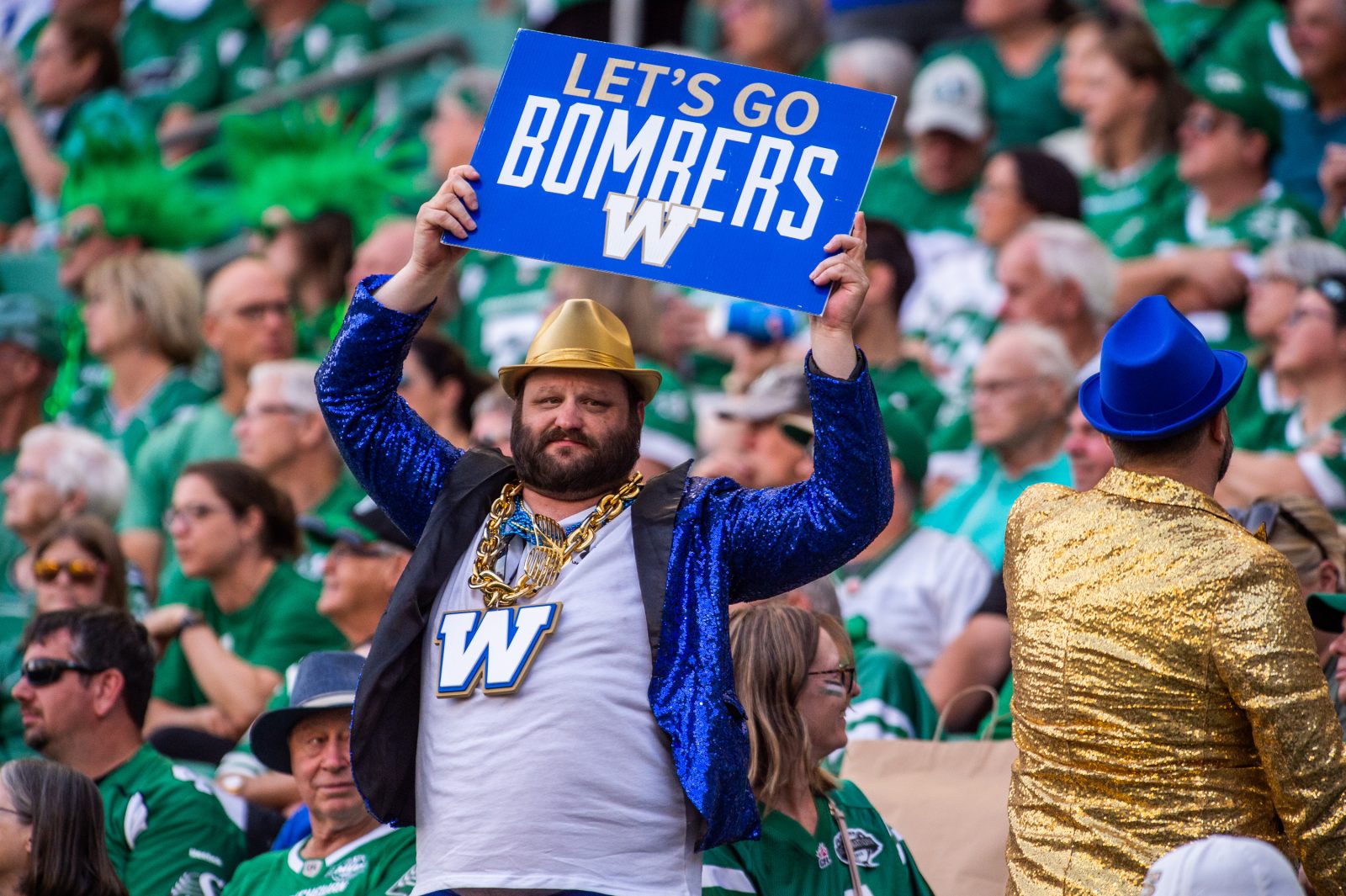 So, let’s consider what earning that ‘X’ means for the Blue Bombers:

All of which will mean squat to a group that continues to preach getting better by one inch each day. Case in point, head coach Mike O’Shea after the win:

“There’s always room for improvement. There’s always IQ stuff we’ll have to learn from this. But, hey, it’s Labour Day against Saskatchewan and we’re leaving here with a win, so that’s pretty fantastic.”

THERE WAS A TON OF POST-GAME CHATTER AFTERWARDS ABOUT… a collision between Blue Bombers QB Zach Collaros and Riders embattled defensive tackle Garrett Marino. Here is the hit in question, for which Marino was not penalized.

The play was not brought up in post-game media outside the locker room as neither Collaros nor O’Shea had seen it yet. The coach did tell Derek Taylor and Doug Brown this on CJOB’s post-game show: “Honestly, I haven’t seen it. I will always defend our quarterback and err on the side of player safety but in the end the official on the sideline told me they looked at it and didn’t see anything – didn’t see that it was a foul.”

A CFL spokesperson said Monday – while the Hamilton-Toronto Labour Day Classic was unfolding – that the league hadn’t reviewed any plays in question yet, as the week’s slate of games hadn’t been completed.

In any case – possible supplemental discipline or not – this is a topic that is already carrying into this weekend’ Banjo Bowl rematch.

A GOLD STAR FOR KICKER MARC LIEGGHIO… and how he has handled himself since whiffing on a potential game-winning 31-yard field goal in the loss to the Montreal Alouettes a couple weeks back – the only blemish this season on the Blue Bombers record.

He spoke to the media immediately after that game and took ownership of the miss. And in the two games since – wins over Calgary and then Saskatchewan – he has hit all three of his field goals from 32, 41 and 55 yards, and is six-of-six in his convert attempts.

The game-winning 55-yarder does not crack the Top 5 in Blue Bombers history – Justin Medlock and Bernie Ruoff both hit 58 yarders, while Medlock and Troy Westwood (twice) also connected from 57 yards – but it was a career best for Liegghio and the most important kick, so far, of his professional career.

Somewhat lost in his 55-yard bomb was his excellent punting all day and a critical play in the second quarter with the Riders leading 17-7. Saskatchewan attempted a punt block and as linebacker A.J. Allen busted through and looked certain to stuff Liegghio’s attempt, he pulled down the ball, deked around the oncoming blockers and delivered a 49-yard punt.

“My rugby days are coming back a little bit… I’ve got those jukes a little,” said Liegghio with a grin. “That was all just natural. I saw the guy coming, I just got out of the way, and I learned from the Calgary game (where he tried to run for a first down while under pressure) to this game – just kick it instead of run.”

ONE MORE ON LIEGGHIO… the young kicker does have the support of his teammates and that was never more evident than after the Montreal loss and especially so Sunday in Regina.

“Marc’s a tough guy mentally,” said Collaros. “It (the Montreal miss) was one kick and that’s kind of what we said to him after the game, and he knew that because obviously he wanted to make the field goal.

“(The 55-yarder) was huge for him, huge for his confidence – and I don’t know if he’d admit that or not – but he’s a great player. Not to mention his punts the entire night and flipping field position. When we were having to punt from the 25-30-yard line he was doing a great job of making them drive the entire field as well.”

“We believe in Leggz,” added Willie Jefferson. “We believe in him more than I think he believes in himself. He gets down on himself for missing field goals, but us as teammates, us as his friends, we’re going to go in and tell him, ‘Keep trying. We’ve got your back. Don’t look in the past, look to the future, look forward and it’s all going to be good.

“Leggz went out there, went through his routine and put it up and put it through. That’s all we expect from Leggz.” 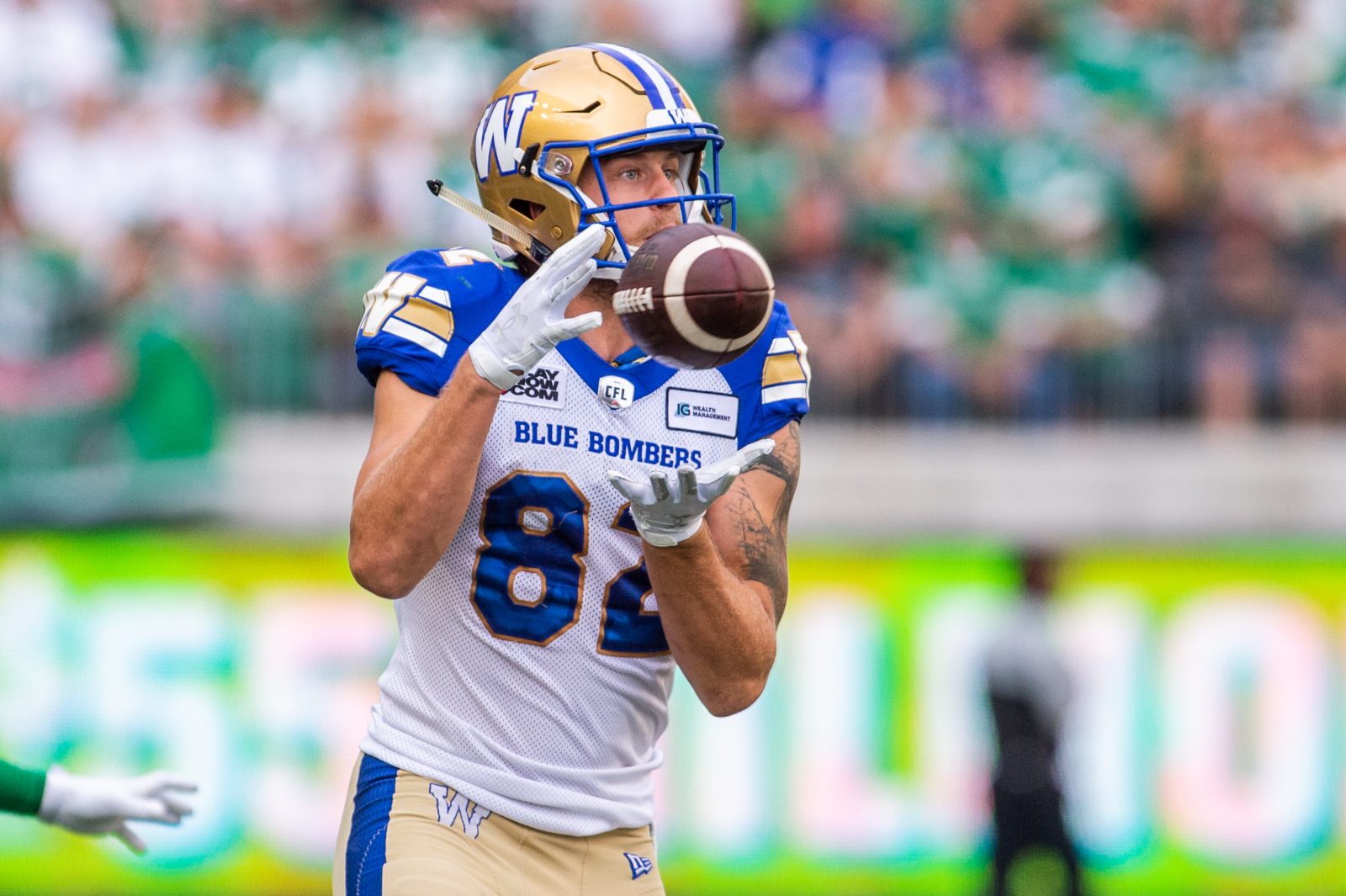 FINALLY, TWO NUMBERS THAT JUMP OUT… from Sunday’s win: After falling behind 14-0 early in the second quarter the Blue Bombers only allowed four points in the final 28 minutes and 38 seconds – a Brett Lauther field goal and a 78-yard punt single by Kaare Vedvik.

Critical, too, was Nick Hallett’s first ever interception with less than two minutes remaining and the Riders driving while down 20-18. The CFL doesn’t track QB pressures like it used to, but pressure from Jefferson forced Cody Fajardo to rush his release and the ball deflected off Frankie Hickson into Hallett’s arms.

“I think Willie was pretty close to getting him,” said O’Shea. “Once again, I think I’ve said it a bunch of times, my old coach Don Wnek (of the Hamilton Tiger-Cats) used to grade guys on how close they are how often. So, getting close counts, too, in this regard.”

The Blue Bombers managed 5.2 yards on first down against the Riders and were good on 50 percent (10-of-20) second-down conversions. In the previous win over Calgary those numbers were 7.3 and 76 percent (16-of-21).

But when it mattered most – leading 20-18, with the ball and with 1:55 remaining – the Blue Bombers offence converted two second downs and took the clock down to eight seconds.

Asked specifically about Wolitarsky and Schoen and the trust he has in them when the offence needs a first or a play breaks down, Collaros offered this:

“They have a really good feel for the scramble plays. On the Dalton touchdown Drew was actually getting to that same area and on the sideline, he goes, ‘I thought you were throwing me the ball’ and I said, ‘What the hell?’

“I could see it from my vantage point and I’m sure you guys all could, too, and on the TV copy it probably looked even better but it was just unbelievable concentration by Dalton on that one. And then the Nic Demski catch (for the TD) is like Willy Mays stuff, man. Unbelievable catch.”

(286)
$50.00 (as of October 2, 2022 10:47 GMT -05:00 - More infoProduct prices and availability are accurate as of the date/time indicated and are subject to change. Any price and availability information displayed on [relevant Amazon Site(s), as applicable] at the time of purchase will apply to the purchase of this product.)

(15779)
$13.30 (as of October 2, 2022 10:47 GMT -05:00 - More infoProduct prices and availability are accurate as of the date/time indicated and are subject to change. Any price and availability information displayed on [relevant Amazon Site(s), as applicable] at the time of purchase will apply to the purchase of this product.)

(25373)
$21.25 (as of October 2, 2022 10:47 GMT -05:00 - More infoProduct prices and availability are accurate as of the date/time indicated and are subject to change. Any price and availability information displayed on [relevant Amazon Site(s), as applicable] at the time of purchase will apply to the purchase of this product.)

(38013)
$11.89 (as of October 2, 2022 10:47 GMT -05:00 - More infoProduct prices and availability are accurate as of the date/time indicated and are subject to change. Any price and availability information displayed on [relevant Amazon Site(s), as applicable] at the time of purchase will apply to the purchase of this product.)

(43937)
$26.95 (as of October 2, 2022 10:47 GMT -05:00 - More infoProduct prices and availability are accurate as of the date/time indicated and are subject to change. Any price and availability information displayed on [relevant Amazon Site(s), as applicable] at the time of purchase will apply to the purchase of this product.)