It was a narrative the Winnipeg Blue Bombers ignited themselves and then watched as it became a talking point in the early part of this Canadian Football League season. Even after a win over Toronto last month – and then compounded by a loss to the Argonauts a week later – the Bombers talked about being more physical and playing with more physicality.

The talking point, frankly, was lost on almost anybody who wasn’t at field level or in the film room. Football is a violent sport, after all, and quantifying what the Bombers were suggesting they were lacking, let alone understanding it, was virtually impossible. Well, after watching Sunday’s 23-8 win over the Saskatchewan Roughriders in the annual Labour Day Classic, there is now some very real evidence that everyone can understand, for the Bombers delivered wallop after wallop in a game that was more about the smash-mouth than it was about finesse.

The Riders entered the game with the CFL’s most explosive offence, but managed just two Brett Lauther field goals, a single on a Lauther miss and a rouge by Jon Ryan on a punt. Saskatchewan had just 258 yards net offence – 81 yards coming on their last drive – and of its 16 offensive possessions, nine ended with punts, three ended on interceptions, three ended in field goal attempts (two makes, one miss), and their final one ended with a turnover on downs.

One of the most-telling stats: the Riders were just five of 23 (22 percent) on second down conversions as the Bombers limited Saskatchewan to just 16 first downs and 25 minutes and 16 seconds of possession. The game also marked the third time in five games this season the club had limited the opposition to 10 points or less. Just FYI, the 67 points allowed through five games is the lowest at this point of a season since 1958, when the Bombers surrendered just 61 points through their first five contests.

Asked if the three-games-under-10 points stat is something ‘defensive players wear with a lot of pride’, Bombers head coach Mike O’Shea was succinct.

“Pride can be dangerous.”

“Still, a pretty good accomplishment, is it not?”

“It is,” added O’Shea. “Doesn’t change the fact that pride can be very dangerous. The consistent effort, sticking to the process, executing at a high level, tackling well, being tough on the ball, being physical may lead to more of those outcomes through that process. But talking about holding them to a certain amount of points will never get you there. It’s about what you do in the prep week, how you take care of your body, what you bring to the field on game day. Sitting back and admiring it is dangerous.” 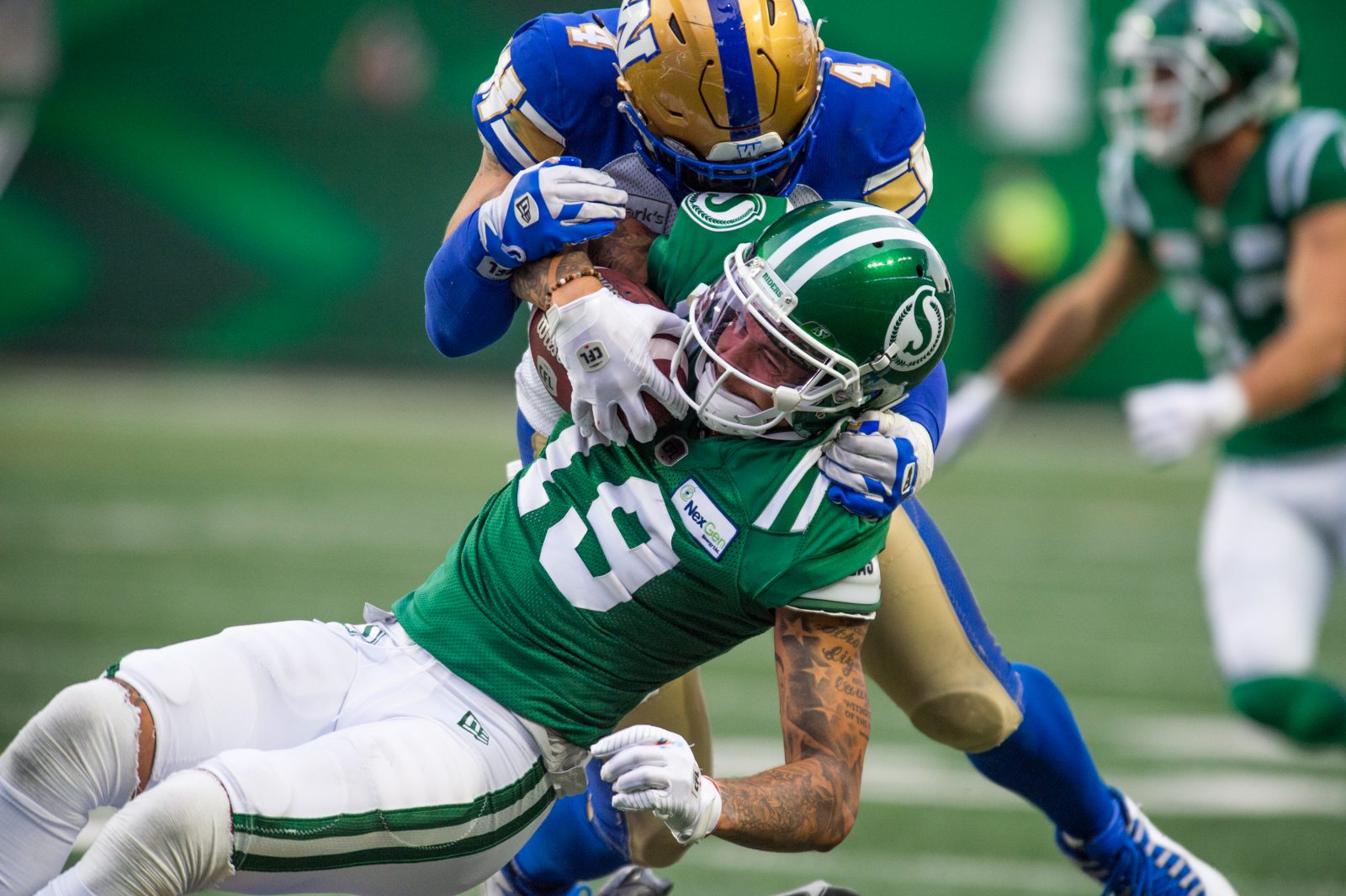 WILLIE JEFFERSON OFFERED SOME JUICY… and it turns out, prophetic, comments on the eve of the game when he told reporters  “They ain’t played nobody special. Nobody with no heat, the way we’re coming. We know it’s a battle for first place in the West but we could care less. We just want to give them our best game and show them that their offence isn’t as prolific as people are saying.”

And so after serving up such a dominant defensive effort, Jefferson was asked after the game if the win sent a message to the rest of the CFL.

“Somewhat,” Jefferson began. “Next week will be the deciding factor. If we can come back and do it two in a row, back-to-back and gain the lead in the West and start our run, then we can say we sent the league a message.

“This week was just 1-0 for us. We’re just trying to go 1-0 each week and play good defensive football, let our offence be on the field as much as they can, as long as they can and put some points on the board to give us a breather. And when we get a chance to go out on the field, try and take the ball away, try and keep them out of the end zone, try to keep points off the board.”

Mission accomplished, as the Bombers forced four turnovers – three interceptions and a turnover on downs – while the offence did its part with three touchdowns en route to the victory, one which ended the Riders’ 10-game regular season home unbeaten streak. It marked just the second time since 2005 that the Bombers had exited Regina on Labour Day weekend with a ‘W’. And it also sets up what should be a dandy rematch this Saturday in the Banjo Bowl.

“We’re going to take our time off, we’re going to celebrate and all that good stuff, but come Day 1 (Wednesday) we’re back to business and back to trying to be 1-0 next week.” 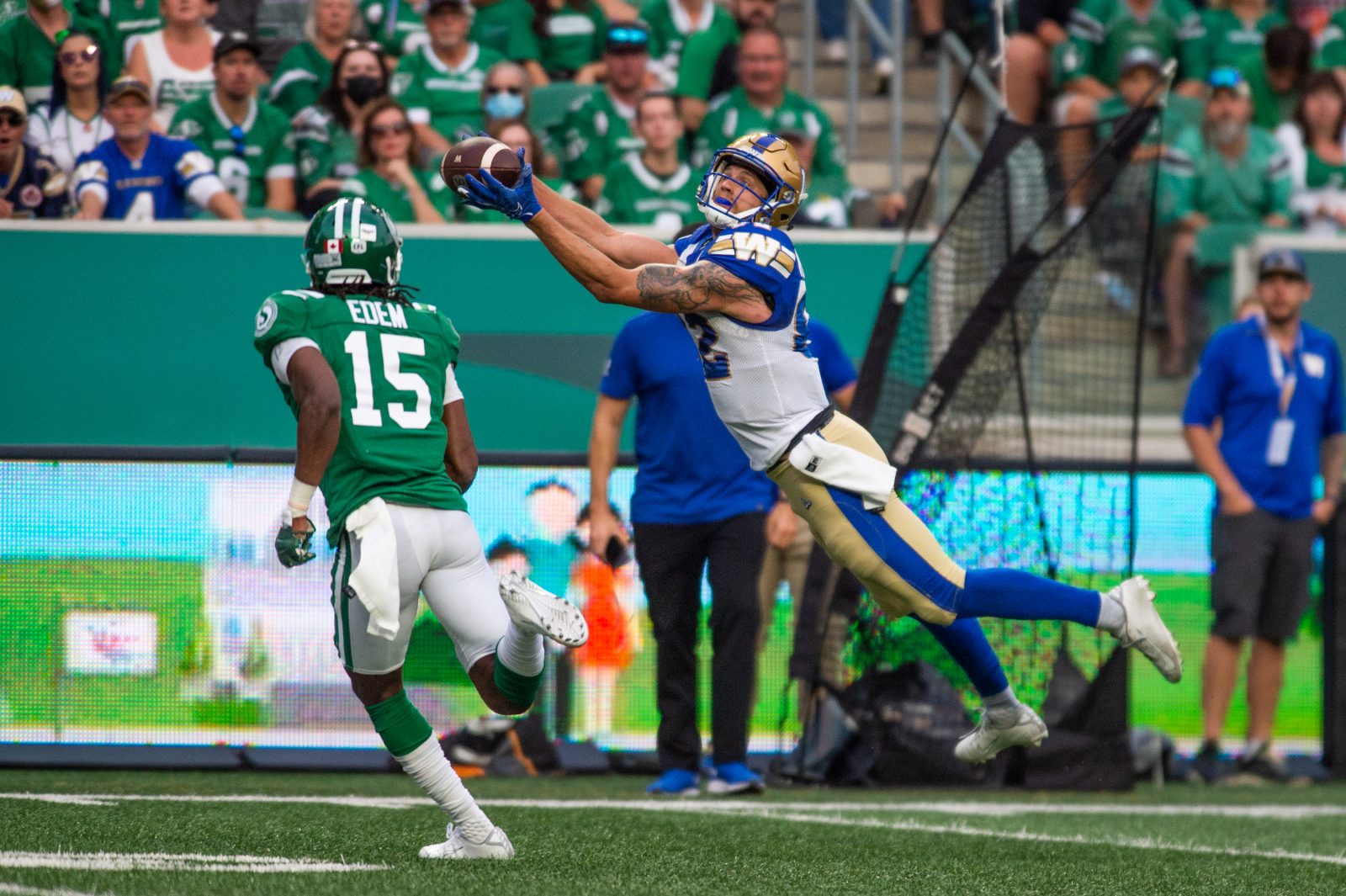 ONE MORE GEM FROM WILLIE… who was asked if it was weird to see another Cody Fajardo pass hit the crossbar – like the last play of the 2019 West Final.

THE LABOUR DAY WIN… featured some solid work from Andrew Harris, who cranked out 95 yards along the ground on 18 carries and pulled in another two passes for 27 yards.

“Today was another step in the right direction,” said Harris, who now has 176 yards rushing in his two starts after missing the first three games of the year. “My confidence was there a lot more, my vision was there a lot more. Just starting to get back to my old self again. There was a play where me and (Riders safety) Mike Edem met each other in the ‘A’ gap and when you get those pops and you get that feeling it gets you into the game and after that play I took that next step forward.

“I feel like I’m going to progress and get better in the next few weeks and hopefully hit my stride very soon.”

THE 95 YARDS HARRIS HAD… along the ground moved him past Joffrey Reynolds into seventh place on the CFL’s all-time rushing yardage list. Harris now has 9,214 yards rushing and is within just 17 yards of passing No. 6 on the all-time list, Kelvin Anderson, who is at 9,230.

“Joffrey is an amazing running back, someone I looked up to,” said Harris. “So it’s definitely an amazing accomplishment and I’m just excited to keep going here and keep building my career and the body of work I’ve put in so far.” 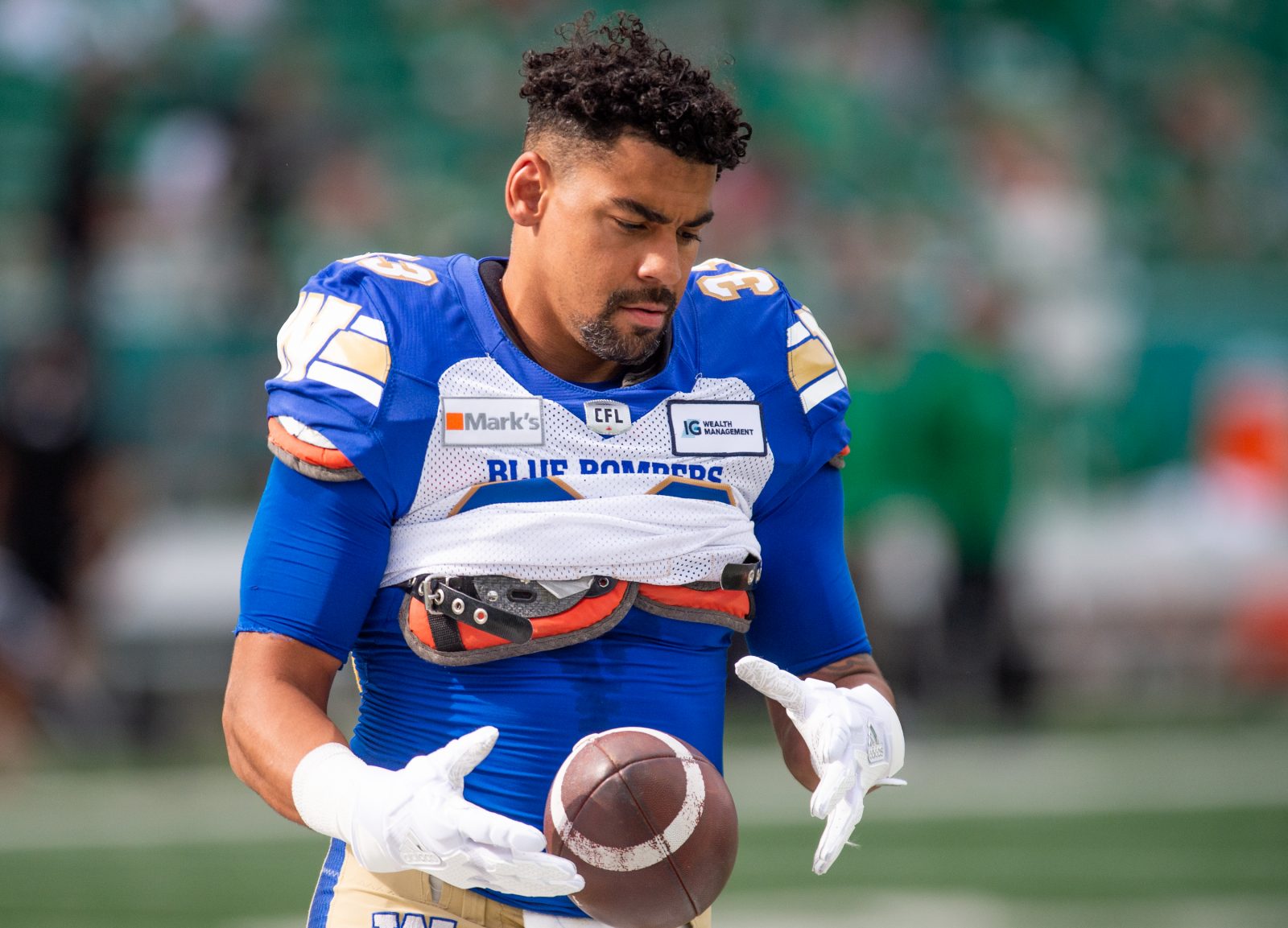 TWO AREAS OF CONCERN… in the wake of the victory were the penalty totals by the Bombers – nine for 79 yards – and the fact Marc Liegghio was 1-of-3 in field goal attempts, although his 37 yarder in the fourth quarter was huge as it put Winnipeg ahead 16-8.

To date this year Lieggho and Tyler Crapigna have combined to go 8 of 12 in the field goal department. The Bombers did add another kicker last week in Ali Mourtada, but he won’t be on the practice field until later this week after his quarantine ends.

COLLAROS FINISHED WITH A TIDY 245 YARDS PASSING… and another 31 yards on three carries in a solid day’s work that included a picturesque 27-yard TD strike to Nic Demski in the fourth quarter that sealed the win.

“There are moments in games where you can kind of sense ‘this is the drive we need to make it happen,’” said Collaros. “I thought to a man out there in the third and fourth there were quite a few of those moments in the huddle. It’s just a great group of guys and guys that understand the situation, understand the moment and guys made plays.”

Demski’s TD was preceded by a diving 28-yard grab by Drew Wolitarsky that converted a second-and-seven.

“It’s one of those games, especially as a receiver, where you can get checked out,” explained Harris of his teammate. “Drew Wolitarsky doesn’t get a lot of balls thrown to him and for him to stay locked in that long and make a massive catch in the fourth quarter, a diving catch… a lot of receivers who don’t get many balls, that’s tough to stay in mentally.

“Nic (Demski) had a drop that he’d probably want to take back… sometimes those things happen and guys go the opposite way and they’re down and out. But he stayed in it, makes a big catch and scores a big touchdown for us.

“It’s the maturity of our team, the brotherhood and, again, each of us having each other’s backs and supporting each other,” added Harris. “It’s definitely an offence by committee, it’s not just one person doing it. We pick each other up when we’re down and that’s the way it should be”

AND, FINALLY… the last word goes to O’Shea, who summed up the Bombers win perfectly.

“We talk about it every year – those games come down to five, six, seven plays,” he said. “And in the end what happens is the winning team nets out by plus-one play. Maybe we were plus two on the play tally, but it really comes down to they make some plays, we make some plays and in a tight game it really nets out to one or two different.

“The interceptions, the takeaways by our defence or those catches in the fourth put us in the positive territory play wise. They made some plays, too.”

(876)
$22.98 (as of September 18, 2021 10:38 GMT -05:00 - More infoProduct prices and availability are accurate as of the date/time indicated and are subject to change. Any price and availability information displayed on [relevant Amazon Site(s), as applicable] at the time of purchase will apply to the purchase of this product.)

(95)
$11.99 (as of September 18, 2021 10:38 GMT -05:00 - More infoProduct prices and availability are accurate as of the date/time indicated and are subject to change. Any price and availability information displayed on [relevant Amazon Site(s), as applicable] at the time of purchase will apply to the purchase of this product.)

$24.41 (as of September 18, 2021 10:38 GMT -05:00 - More infoProduct prices and availability are accurate as of the date/time indicated and are subject to change. Any price and availability information displayed on [relevant Amazon Site(s), as applicable] at the time of purchase will apply to the purchase of this product.)

(35)
$9.45 (as of September 18, 2021 10:38 GMT -05:00 - More infoProduct prices and availability are accurate as of the date/time indicated and are subject to change. Any price and availability information displayed on [relevant Amazon Site(s), as applicable] at the time of purchase will apply to the purchase of this product.)

$20.99 (as of September 18, 2021 10:38 GMT -05:00 - More infoProduct prices and availability are accurate as of the date/time indicated and are subject to change. Any price and availability information displayed on [relevant Amazon Site(s), as applicable] at the time of purchase will apply to the purchase of this product.)