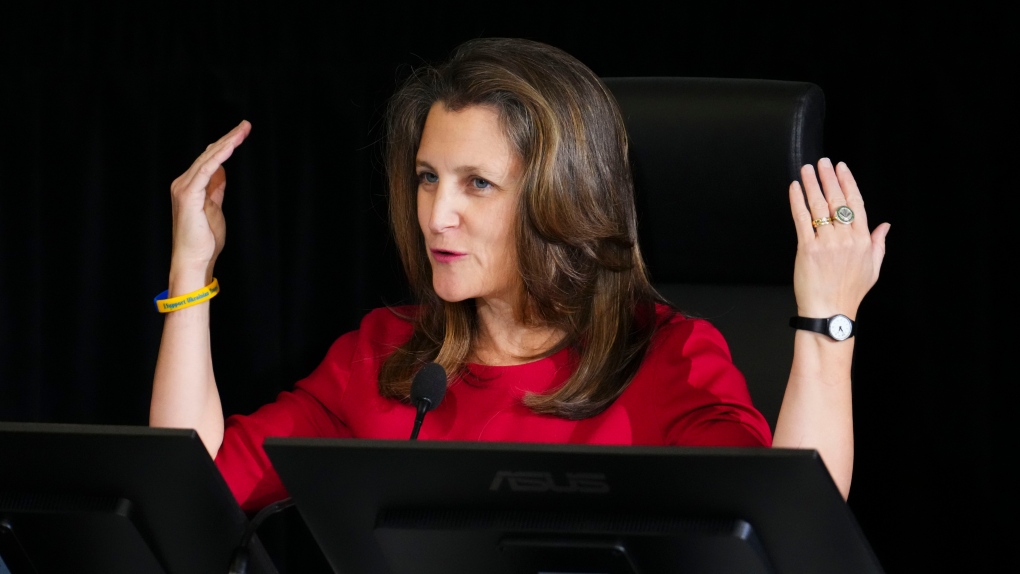 On the second last day of hearings at the Public Order Emergency Commission, Deputy Prime Minister and Finance Minister Chrystia Freeland took the stand, testifying about her role in sculpting emergency economic measures that came into effect when the federal government invoked the Emergencies Act.

Freeland told the commission about the conversations she was having with top American officials about the serious strain the “Freedom Convoy” border blockades were having on the automotive sector, recalled with some emotion a pivotal call she had with banks, and sought to outline why she felt last winter’s protests were “an attack on democracy.”

Here are some notable takeaways from Freeland’s testimony.

The main point Freeland sought to drive home through her testimony was how gravely concerned senior U.S. officials were about the impact the “Freedom Convoy” protests and border blockades were having on cross-border trade and key Canada-U.S. supply chains. Citing the automotive manufacturing sector repeatedly as a core example, Freeland testified that the federal government feared the border shutdowns would have long-term effects on Canadian companies.

During her testimony, Freeland was asked about a Feb. 10 email she wrote to top federal officials following a phone call she had with White House Director of the National Economic Council Brian Deese.

According to Freeland’s email, U.S. President Joe Biden’s top economic policy adviser called her and was “very, very, very worried” about the Ambassador Bridge border blockade. “If this is not sorted out in the next 12 hours, all of their north eastern car plants will shut down,” Freeland wrote, going on to indicate the pair would be talking every day until it was “sorted out.”

Here’s what Freeland then told the commission about this interaction.

“What was striking to me about the conversation I had with him… is he is a person who is very hard for Canadians to get a hold of… And so what was really striking to me, was how quickly he got on the phone with me… It was instant. And while in some ways, you know, that was in as a practical matter. That was good. But it gave me a measure of how worried the White House was about this.”

“This was so worrying to me, because I could see really for the first time ever the Americans having this amber light flashing in Canada, and this amber light that said to them: ‘you know what, the Canadian supply chain could be a vulnerability.’ … And that’s a problem for us, because there are plenty of Americans, both Democrats and Republicans who would love any excuse to impose more protectionist measures on us,” Freeland said.

This conversation with Deese then prompted Freeland the next day, in texts she sent to Prime Minister Justin Trudeau’s Deputy Chief of Staff Brian Clow show, to take the position that: “this can’t go on,” and “we need to show some federal leadership.”

Another notable portion of Freeland’s testimony centred around a readout of a Feb. 13 call that Freeland had with bank executives soliciting input on what the federal government could do to address the protests. While it wasn’t stated in the readout, at this point the government was on the verge of invoking the Emergencies Act.

The readout has the names of the bankers on the call redacted, but here are some examples of what the bankers had to say:

“Canada’s reputation is at stake… The big hole in our financial system is these platforms, which are effectively money service businesses that are not being regulated as such.”

“If you list them as people subject to sanctions (i.e. as if they are terrorists) we could act swiftly.”

“I am very concerned about the banking system being seen as a political weapon of the government. We can’t politicize the banks.”

“Just spent a lot of time in the U.S. last week, and we were being called a ‘joke’ by people. I had one investor say ‘I wont invest another red cent in your banana republic in Canada.’ That adds to an already tough investment perspective… This is a national crisis you need to act immediately.”

When recounting this “heart-stopping” conversation before the commission, Freeland appeared to tear up.

“That quote relayed to me, really made me realize I had a duty of stewardship. I have a duty. I had at that moment a very profound duty to Canadians to stand up for them. And I’m surprised that I’m getting emotional, but I really felt it. And I felt like you know, the Canadian economy could seem like this amorphous thing. Investment, it can seem amorphous. EV incentives; amorphous. But when I heard that I realized, I’m the finance minister. I’m the deputy prime minister. I have to protect Canadians. I have to protect their well being, it’s being really, really damaged. So yeah, that was a meaningful conversation for me,” she said.

CAN ECONOMIC HARM BE AN ‘ATTACK ON DEMOCRACY’?

In the same call, according to the notes, Freeland called the protests “an attack on democracy.”

“You all need to know, I think thus is indeed a crisis. It is a threat to our democracy and to peace, order and good government. I care about privacy but also care about restoring order in our society. All options are on the table. This is not just a job for Finance… and we will not let this happen again.”

Asked by a commission lawyer to explain what she meant by calling the protests an attack on democracy, here’s what she said.

“I was responding specifically to one of the CEOs whose bank had acted to freeze an account. Based on—this was prior to the invocation of the Emergencies Act—it was based, as that note shows, on what the bank’s anti-money laundering systems detected. And based on that, the bank rightly acted. What was a concern for me and this did shape how we acted, was the banks being blamed for taking this action… And you note the mention of Fox News. The thing you have to remember about Canadian banks is many of them are significant banks in the United States as well. They are big players there and some of them trade under their Canadian names. And so they were in jeopardy not only in Canada, but also in the United States, if they were being seen to be taking a politicized position. I didn’t think that was their responsibility. I thought it was the responsibility of the government to make judgments about this.”

Her perspective on the protests being an attack on democracy as they were painting Canada as potentially politically unstable were probed further under cross examination by the Canadian Civil Liberties Association (CCLA).

CCLA lawyer Ewa Krajewska put it to Freeland that economic security wouldn’t trump the right to protest, noting that forms of civil disobedience such as a general strike or the ‘Occupy Wall Street’ movement, do cause economic harm.

Freeland said that, in her view, the economic harm in those examples would not be comparable to the harm seen in Canada as a result of the “Freedom Convoy.”

INSIGHTS INTO MULRONEY AND BEATTY TALKS

Lastly, Freeland’s testimony also revealed that she was in contact with former federal Conservative lawmaker Perrin Beatty—who was responsible for the initial drafting of the Emergencies Act back in 1988—and then-minister Brian Mulroney, about the Act.

In a text message dated Feb. 22, Beatty, who is now President and CEO of the Canadian Chamber of Commerce, wrote to Freeland:

“While I’m still working my way through the implications, the financial aspects you announced seem to be the most significant additional measures that the government took under the Act.

“I certainly hope that we’ll see an early non-violent end to the blockades, although I am worried, as I know you are.

“There are also lots of long term issues we need to consider once this is over, including whether we need to take other measures that could obviate the need to use extraordinary powers in the Act in the future, and how to repair holes in our political system. I’m particularly concerned about the radicalization of people who would normally be law-abiding and focused on going about their daily lives.”

Then, Freeland was shown notes that she took during a call she had with Mulroney, dated Feb. 25.

“Emergencies Act- I brought it into law so I am in favour of it,” reads one of Freeland’s notations of Mulroney’s comments on the call.

“I am glad I brought in that legislation,” reads another.

Asked what recollection she had of this call with Mulroney, Freeland said she believes it was largely a conversation about Russia’s invasion of Ukraine one day prior, though she noted Mulroney has been a helpful adviser to her and the Liberal government, dating back to the NAFTA re-negotiations.

(12037)
$21.12 (as of December 7, 2022 10:28 GMT -06:00 - More infoProduct prices and availability are accurate as of the date/time indicated and are subject to change. Any price and availability information displayed on [relevant Amazon Site(s), as applicable] at the time of purchase will apply to the purchase of this product.)

(404)
$14.99 (as of December 7, 2022 10:28 GMT -06:00 - More infoProduct prices and availability are accurate as of the date/time indicated and are subject to change. Any price and availability information displayed on [relevant Amazon Site(s), as applicable] at the time of purchase will apply to the purchase of this product.)

(277)
$15.99 (as of December 7, 2022 10:28 GMT -06:00 - More infoProduct prices and availability are accurate as of the date/time indicated and are subject to change. Any price and availability information displayed on [relevant Amazon Site(s), as applicable] at the time of purchase will apply to the purchase of this product.)

(3269)
$12.79 (as of December 7, 2022 10:28 GMT -06:00 - More infoProduct prices and availability are accurate as of the date/time indicated and are subject to change. Any price and availability information displayed on [relevant Amazon Site(s), as applicable] at the time of purchase will apply to the purchase of this product.)