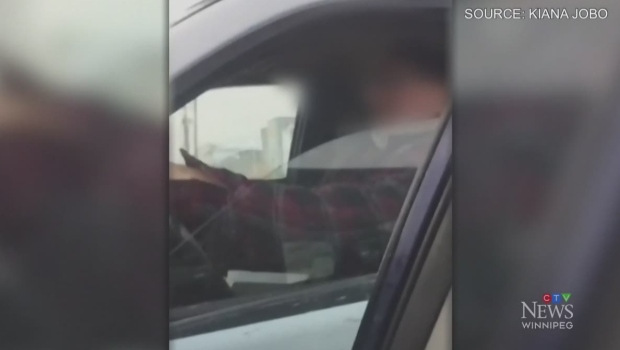 WINNIPEG — Winnipeg police have charged a Manitoba man after an act of road rage was captured on video showing a driver smashing into a car multiple times. Now the victim in the crash is calling for more charges to be laid against the driver.

Kiana Jobo told CTV News she was driving to CF Polo Park Mall with her father when a man in a nearby truck began honking his horn at her. She said the man got belligerent and started following her down Milt Stegall Drive, which is where the incident took a violent turn.

“He drives his truck into the passenger side of my vehicle, causing my vehicle to then spin out,” Jobo said.

The altercation was far from over.

Video of the incident shows a man driving a truck roll down his window before ramming the side of Jobo’s car.

Jobo said she tried to get away but the man in the truck pursued her as she fled and repeatedly tried to run her off the road.

She said the driver hit her vehicle and caused it to do a 180-degree spin before crashing into a concrete median on Portage Avenue.

Winnipeg Police Const. Rob Carver said a 57-year-old man is being charged with one count of dangerous operation of a vehicle. The charge has not been proven in court.

“This is very, very aggressive super dangerous actions on the part of the driver of the white truck,” Carver said. “Certainly, someone could have been injured; (it’s) stunning that they weren’t.”

Manitoba Public Insurance (MPI) said drivers who are ticketed or convicted of dangerous driving are referred to the driver improvement and control unit.

“In some situations, if the driver has a couple of those tickets they may be required to take a defensive driving course or a responsible driving course,” Brian Smiley, a spokesperson for MPI, told CTV News.

Smiley said if a vehicle is damaged in a road rage incident, the special accounts and subrogation unit will try to seek cost recovery from the responsible driver.

Jobo said she believes this incident was a serious crime, and she would like to see more charges brought forward in addition to dangerous driving.

She said she still does not know what provoked the attack on the road.

“Why did you do this? I want to know why this happened to me,” she said. “I want justice served; I don’t want this to happen to anyone else.”

MPI said if someone is being aggressive on the road – Manitobans should not escalate the situation and try to leave the area.