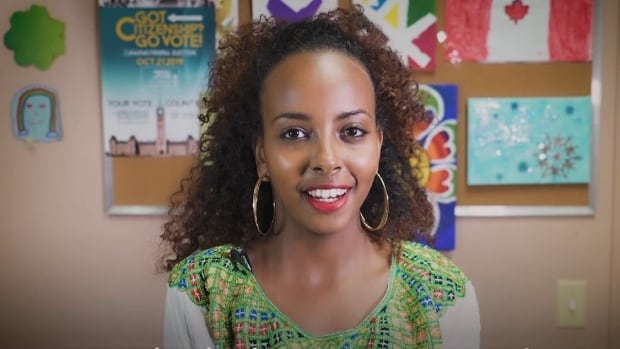 This is a screenshot of an Amharic-language video that encourages newcomers to vote in the Oct. 21 federal election. Groups that work with newcomers in Winnipeg have produced videos in 13 languages. (Immigration Partnership Winnipeg)

A series of made-in-Manitoba videos encourages more newcomers to Canada to vote in the Oct. 21 federal election.

Three Winnipeg organizations that work with newcomers — Immigration Partnership Winnipeg, the Ethnocultural Council of Manitoba and the Immigrant and Refugee Community Organization of Manitoba — are distributing short clips on social media that explain the basics of voting and Canada’s electoral system in 13 languages.

The intention is to help newcomers feel more comfortable with voting, which is dangerous or nonexistent in some parts of the world, said Jennifer Chen of the Ethnocultural Council.

“When newcomers see those videos in their own language, they trust the information,” said Chen, who came to Canada from China a decade ago and became a Canadian citizen in 2016.

“In their own countries, in the places where they come from, they may be afraid of authority. They may not trust authority.”

Newcomers also may not know how to vote or be aware of the benefits, she said.

Newcomers also may not be aware it is safe to vote in Canada, said Habtemicael Beraki, who is originally from Eritrea.

“It is very simple,” Beraki said. “Here, [there’s] no pressure. [You can] do it easily, clearly. It is wonderful.”

Both Chen and Beraki will vote in their first federal election on Oct. 21.

The explainer videos, which appear on the Immigration Partnership’s federal election website, have been produced in Amharic, Arabic, English, French, Hindi, Mandarin, Punjabi, Somali, Spanish, Swahili, Tagalog and Tigrinya, as well as in American Sign Language.

Not all businesses rushing to reopen their doors as restrictions ease