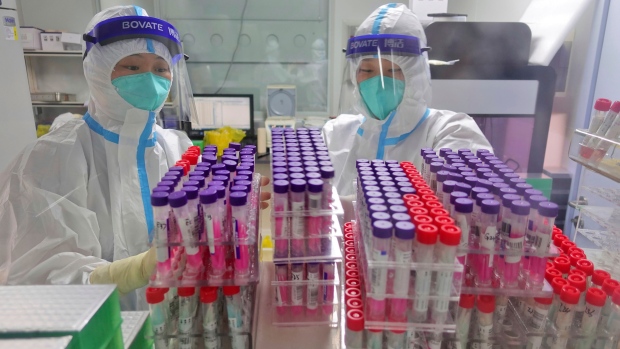 Putting an end to the COVID-19 pandemic will mean priming the immune systems of everyone on Earth but the virus is spreading quickly and may take years to “settle down,” says an infectious disease specialist.

Just as some scientists started to voice the idea that COVID-19 might have reached the peak in its evolution with Delta and people began taking steps to learn how to live with the virus, a new variant struck. Omicron has been identified in several parts of the world.

Dr. Isaac Bogoch, an infectious diseases specialist at the University of Toronto, said while vaccines are extremely important, strong political leadership and policy is what will help bring COVID-19 under control, a strategy reinforced by the emergence of the Omicron variant.

“I’m just guessing here, but what’s likely going to happen is this virus is not going to go away for a long, long, long time,” he said in an interview.

“There’s been so many people around the world who have been infected with the virus, that we’ve given it a lot of opportunity to make mutations, and even very, very rare mutations,” he said.

But that slower rate of evolution is offset by worldwide infections, giving the virus millions of chances to become more transmissible, he noted.

“It has been a little bit surprising at the population level that the variants have arisen and spread so, so easily or so quickly,” Brockman said.

“We hadn’t anticipated that the virus would have spread so quickly, so widely to so many people.”

While it’s “important for people to know that we won’t have to live with various public health restrictions forever,” Bogoch said it’s hard to predict anything further than about two months into the future.

Scientists and researchers look at other respiratory viral pandemics for an estimate on how long COVID-19 could stick around.

“I’d guess the pandemic would last for a total of two to four years, and then we would start seeing things settle down, depending on what country you live in. But this isn’t influenza,” Bogoch said.

“So, I mean there’s some lessons that I think we can learn from other pandemics, but we also have to recognize that this is not the flu and it might behave a little bit differently.”

A statement from the World Health Organization said the opportunity to eradicate the virus is largely gone.

“We are moving toward the virus becoming endemic, which means it will stay with us,” it said.

“There is no formal definition or cutoff point at which an outbreak is considered a pandemic or ceases to be one, so this is not a simple question to answer.”

A pandemic is defined as a global spread of a disease that is either new or occurring well above normal levels, it said.

“At this moment, WHO considers that COVID-19 continues to be a pandemic. If we are able to bring and keep the spread of the disease down and avoid the large number of deaths we are currently witnessing, we can move beyond the pandemic stage.”

Christopher Rutty, a medical history professor at Dalla Lana School of Public Health at the University of Toronto, said smallpox elicited debates about vaccination, while polio, like COVID-19, demonstrated the importance of political leadership.

The Spanish flu “sort of petered out,” evolved into less severe strains and became more seasonal, he added.

“But COVID, this is new. This is uncharted territory,” Rutty said.

“You can look back at different diseases, but there’s a lot of differences in economics and the politics of different times and how people move around. If some people aren’t being fully vaccinated, then there are viruses still getting around and people are travelling and so that’s what makes it hard to see the end.”

Prof. Sarah Otto, an evolutionary biologist at the University of British Columbia, said the virus could evolve in combinations of mutations that “give it a fitness advantage,” helping it transmit faster or make it more dangerous, which is what Omicron appears to have done.

The unusual thing about this virus is that it is a “generalist,” allowing it to easily move between species, Otto said.

The virus has now been able to spread to a number of animals including household pets, hippopotamus, big cats, primates and mink. The Canadian government announced that the COVID-19 virus was found in white-tailed deer in Quebec in early December.

“Animal reservoirs mean that we won’t be able to eradicate SARS-CoV-2 because it’s now in enough animals that it will circulate there and come back to us,” she said.

There are a number of unknowns with such infections, including which animals pose the biggest risk of transferring the disease back to humans, Otto said.

The other concern with COVID-19 is it can go undetected with the infected person showing no symptoms for long periods, she said.

Vaccines are expected to have taught our immune systems to recognize the spike protein made by the virus, despite the many changes in Omicron, she said.

Otto said the “cool thing” about the human immune system is that it is not a one-size-fits-all reaction, rather a number of cells and antibodies are made that recognize lots of different parts of viruses and bacteria.

While the evolution of organisms never stops, priming the immune system with vaccinations makes it hard for the COVID-19 virus to infect the body, Otto said.

This report by The Canadian Press was first published Dec. 9, 2021.

(3037)
$7.49 (as of January 22, 2022 10:33 GMT -06:00 - More infoProduct prices and availability are accurate as of the date/time indicated and are subject to change. Any price and availability information displayed on [relevant Amazon Site(s), as applicable] at the time of purchase will apply to the purchase of this product.)

(4060)
$3.19 (as of January 22, 2022 10:33 GMT -06:00 - More infoProduct prices and availability are accurate as of the date/time indicated and are subject to change. Any price and availability information displayed on [relevant Amazon Site(s), as applicable] at the time of purchase will apply to the purchase of this product.)

(10805)
$14.57 (as of January 22, 2022 10:33 GMT -06:00 - More infoProduct prices and availability are accurate as of the date/time indicated and are subject to change. Any price and availability information displayed on [relevant Amazon Site(s), as applicable] at the time of purchase will apply to the purchase of this product.)

Harry Potter and the Philosopher's Stone

(35564)
$10.99 (as of January 22, 2022 10:33 GMT -06:00 - More infoProduct prices and availability are accurate as of the date/time indicated and are subject to change. Any price and availability information displayed on [relevant Amazon Site(s), as applicable] at the time of purchase will apply to the purchase of this product.)

$10.99 (as of January 22, 2022 10:33 GMT -06:00 - More infoProduct prices and availability are accurate as of the date/time indicated and are subject to change. Any price and availability information displayed on [relevant Amazon Site(s), as applicable] at the time of purchase will apply to the purchase of this product.)