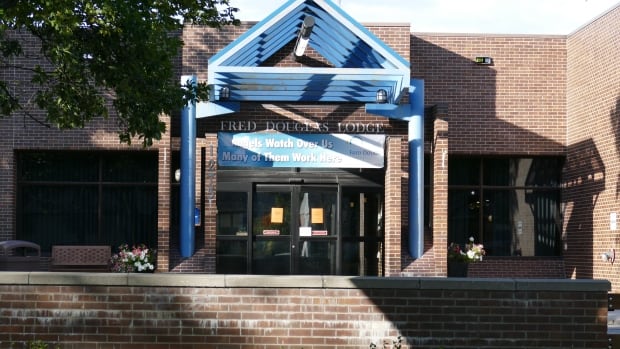 Management at a Winnipeg personal care home sent a letter to families last month admonishing some visitors for rude behaviour and breaking rules put in place to contain COVID-19.

But one family member with a loved one at Fred Douglas Lodge says it’s staff who have been rude to her, and accused workers of neglecting her elderly aunt.

“We family members probably wouldn’t be lashing out if our loved ones were being taken care of,” said Sandra Mymryk, whose aunt lives at the care home in Winnipeg’s Shaughnessy Park area.

“If she was being taken care of, then I would have nothing to complain about.”

It’s been nearly a month since Fred Douglas Lodge management sent a letter to families describing threats, rudeness and “non-compliance” with pandemic precautions after the care home allowed in-room visits to resume on Aug. 4.

“After three weeks of in-room visiting, staff and management have witnessed numerous and repeated acts of non-compliance with the visiting requirements,” CEO Roslyn Garofalo wrote in the Aug. 26 letter.

“Furthermore, our employees are being subjected to rude behaviour, vulgar language, threats and a general disregard for their personal safety and that of the residents by some visitors.”

In addition to threatening and swearing at employees, the letter said staff had identified a list of non-compliant behaviour by visitors, ranging from not wearing PPE or removing it residents’ rooms to wandering hallways and approaching or lingering in the lounge area and nursing station, including going into the fridge and microwave.

The behaviour had prompted management to consider terminating in-room visiting, Garofalo wrote in the letter, as COVID-19 cases spiked in Manitoba in August.

Soon after the letter was sent to families, however, on Sept. 1, visits were suspended when an employee at the home tested positive for COVID-19.

To Mymryk, the letter was “disturbing.”

Before it was posted, Mymryk had herself written a complaint to management saying her aunt was not getting proper care at the home for 136 residents.

“During this unprecedented event that is COVID-19, we trusted Fred Douglas staff members to take care of our loved one. Unfortunately, yesterday, for my first allowed visit inside since March 2020, I could see how my auntie has been neglected since the closure of your facility to the public,” she said in a July 31 email to the CEO.

“The first thing I’ve noticed when entering my auntie’s room was the smell of urine,” she said.

Mymryk alleges she saw fecal matter on the bar beside the room’s toilet as well as dirty clothing and other people’s belongings in her aunt’s wardrobe of clean clothes.

“This is clearly neglect,” she wrote.

In addition to her concern about her aunt’s living conditions, Mymryk wrote a nurse had been rude to her.

On one occasion, she wrote, when she told staff her aunt’s room was dirty, she says she was threatened with not being allowed back into the facility if she didn’t follow guidelines for masks and goggles during visits.

“I would not have nothing to complain about, if there was not poop on her handlebar or her sitting there in her urine,” she said.

“We were told that we needed to wear eye protection, but their own staff wasn’t wearing eye protection. I witnessed staff members sometimes with their masks down…. So they push the protocols onto us, but yet they’re not following them.”

Mymryk said issues with her aunt’s care pre-date the pandemic. She saw improvement in her aunt after the family spent thousands to hire additional caregivers after a surgery last year, she said, but the extra caregivers weren’t allowed in the home after the pandemic began.

“All we want is that these people be cared for, taken care of, treated like human beings,” she said.

No further cases of COVID-19 after Sept. 1 positive test

When CBC asked about Mymryk’s complaint, Garofalo said she cannot discuss a resident’s personal information publicly and said she’s available to speak to families who have concerns.

After a meeting with Dr. Brent Roussin, Manitoba’s chief public health officer, and Health Minister Cameron Friesen, Garofalo wrote a memo to staff on Sept. 2, reminding them to adhere to pandemic protocols.

The memo listed requirements such as wearing a mask and eye shield when providing care to residents, maintaining distance from co-workers during breaks and not sharing food. There was also a reminder to maintain hand hygiene.

Since the employee’s positive test Sept. 1, the care home has reported no further cases.

The union representing health care aides, support workers and housekeeping staff at Fred Douglas Lodge and other care homes is calling for an increase in staffing levels to improve the quality of care.

“I’d really like to see the staffing levels be higher so that people can get the care they need,” said CUPE 204 President Debbie Boissonneault in an interview.

She said short-staffed workplaces are leading to employee burnout.

“People shouldn’t have to rush from one resident to another resident because they’re working short,” said Boissonneault. “We want to make sure that they’re getting the proper care and nothing has to be left behind.”

In a letter to the health minister last June, the union called on the government to increase staffing levels at long-term care homes in Manitoba.

Staffing ratios introduced in 2009 in Manitoba call for 3.6 hours of direct care per resident per day, provided by a combination of nurses and health care aides, a provincial spokesperson said.

The union says the standard should be increased immediately to 4.1 hours.

The Manitoba Nurses Union and the Manitoba Association of Residential and Community Care Homes for the Elderly, whose members include Fred Douglas Lodge have made similar recommendations.

The groups also call for increased funding to pay for the change.

A provincial spokesperson told CBC News the government has committed to covering personal care home operators’ increased costs related to COVID-19, but did not address whether the government would increase the standard for daily hours of care per resident.

The Long-Term and Continuing Care Association of Manitoba says the behaviour identified in the Aug. 26 letter to families of Fred Douglas Lodge residents is concerning.

“Isn’t that sad?” said Jan Legeros in an interview with CBC. “We all want to work as a team to fight off this pandemic.”

Legeros said she doesn’t see the letters from the CEO as attaching blame, but rather as a reminder for everyone to be vigilant.

“I think we’re all getting tired of this pandemic. And so it never hurts to remind people of the things that we need to do.”

(9212)
(as of October 27, 2020 - More infoProduct prices and availability are accurate as of the date/time indicated and are subject to change. Any price and availability information displayed on [relevant Amazon Site(s), as applicable] at the time of purchase will apply to the purchase of this product.)

(9212)
(as of October 27, 2020 - More infoProduct prices and availability are accurate as of the date/time indicated and are subject to change. Any price and availability information displayed on [relevant Amazon Site(s), as applicable] at the time of purchase will apply to the purchase of this product.)

(1652)
(as of October 27, 2020 - More infoProduct prices and availability are accurate as of the date/time indicated and are subject to change. Any price and availability information displayed on [relevant Amazon Site(s), as applicable] at the time of purchase will apply to the purchase of this product.)

(189)
(as of October 27, 2020 - More infoProduct prices and availability are accurate as of the date/time indicated and are subject to change. Any price and availability information displayed on [relevant Amazon Site(s), as applicable] at the time of purchase will apply to the purchase of this product.)

(1819)
(as of October 27, 2020 - More infoProduct prices and availability are accurate as of the date/time indicated and are subject to change. Any price and availability information displayed on [relevant Amazon Site(s), as applicable] at the time of purchase will apply to the purchase of this product.)