Elder George Fleury is one of several community members from the Métis community of Ste. Madeleine whose stories are featured in a new permanent exhibit opened Friday at the Manitoba Museum that looks at the village’s forced expropriation. (CBC)

George Fleury was just four years old when he and his family returned from a week-long camping trip to find their home reduced to ashes.

And it wasn’t just their house.

All 35 homes in the Métis community of Ste. Madeleine where they lived, a store and the village’s school were purposely burned to the ground in the fall of 1938 as part of a federal government program designed to clear land and create pasture for settler farmers.

It’s a little known part of Manitoba’s history now told in a new exhibit at the Manitoba Museum.

“I was only four years old, but I remember seeing my mother crying and my father’s shoulders heaving, up and down … he was crying too,” Fleury said in a speech at Friday’s launch of the permanent exhibit, called Ni Kishkishin/I Remember Ste. Madeleine. 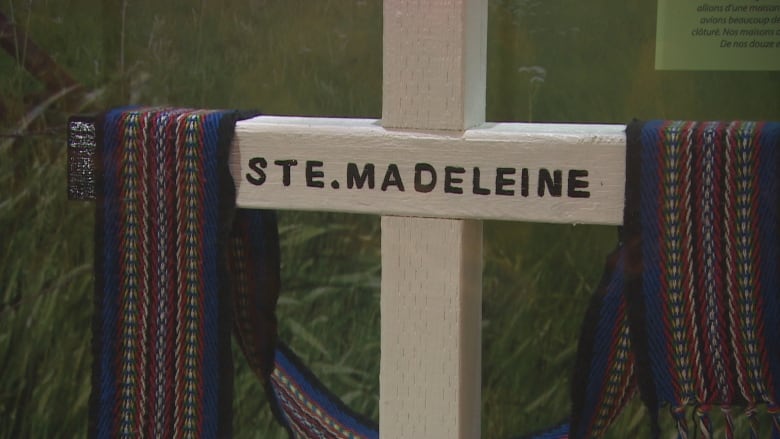 “What used to be a cohesive community, people helping one another, was taken away from us.

“We lost our homes and our livelihood and our dignity.”

To make matters worse, the family’s dogs — and all dogs in the community — were shot dead while the town was being destroyed. Fleury says community members were told the killings were done to stop the spread of disease, but to this day he doesn’t believe it.

“There were no sickness, it was just an excuse,” he said, adding the dogs were used as a resource for the community, for hunting and tasks like hauling wood in the winter.

“They were of good use for the people.”

‘Characteristic of the times’

The forced relocation came after the passage of the Federal Prairie Farm Rehabilitation Act, designed to make use of land that had been abandoned because of poor economic conditions and years of bad weather during the Dirty Thirties.

But in the case of what happened at Ste. Madeleine, she sees racism.

“It was just characteristic of the times that Métis people were practically invisible at that moment and so they were removed from the land and they weren’t properly compensated,” she said Friday.

A community that had existed at that point for 50 years, just disappeared– Dr. Maureen Matthews

“The thing was they had the power to expropriate and they looked at this Métis community and saw unproductive land instead of seeing a vibrant community that was making a go of it.

“A community that had existed at that point for 50 years, just disappeared.”

A release from the Manitoba Métis Federation says those who lived in the village were promised land in kind, but only if families were paid up on their property taxes. Those not able to pay were physically removed by the government.

“It’s a story that needs to be told as we work toward reconciliation with all Manitobans,” said Leah LaPlante, vice-president of the MMF’s southwest region, in the release.

The exhibit includes a full-sized photo of the land where Ste. Madeleine used to sit near the Manitoba-Saskatchewan border in southwestern Manitoba, a look at the unique biodiversity of the area as well as stories of six people, including Fleury, who lived in the community.

Those stories are written in English, French and Michif, the language of the Métis people.

“It’s not the only story of Métis people being pushed around, of racism that happened at the time, but it’s a really good example of how harsh things were,” said Matthews, who hopes those who take in the exhibit get new perspective about how Métis people have been treated in Manitoba. 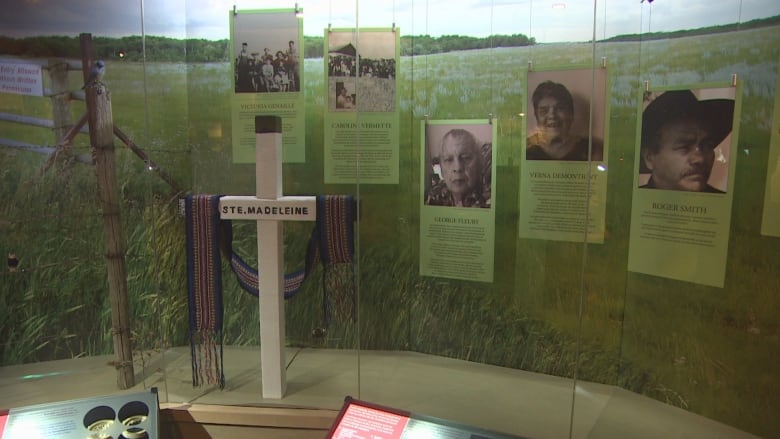 The exhibit includes information on the diverse plant life found in the area where Ste. Madeleine once sat. (CBC)

“I hope they realize that there was a point in Manitoba’s history where the province was pretty oblivious to Métis community needs and that they realize that some things happened that we really can’t call anything but racist.”

Fleury, who says his family resettled but never recovered economically after the expropriation, is glad the village’s story is being told.

“I feel that my story’s been heard,” he told CBC News after seeing the exhibit.

“People are beginning to realize that maybe they should start listening.

“The only thing we can hope for now is that it carries on.”