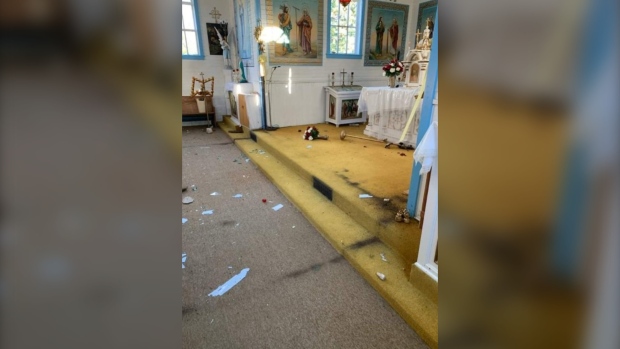 WINNIPEG — Residents of the Interlake community of Fisher Branch are hoping they will be able to restore a historic church following a spree of vandalism early this week.

Fisher Branch RCMP responded to a call of mischief at the disused Ukrainian Catholic Church on Tache Street at around 8:05 p.m. on Tuesday.

Mounties said several windows had been broken and items in the church had been damaged.

“Very disrespectful of them to do that, whether it is a private residence or a church, but especially, gee whiz, a church – it is very disgusting,” said Cliff Skibinski, the president of the church council.

Skibinski looks after the grounds of the church – which is more than 100-years-old. He said a few years back, the church was declared a historic site.

“It’s a beautiful building, it’s got beautiful paintings on the wall inside.”

He said the town was shocked by the damage done to the building, which was built around 1913 by original European settlers to the area.

“They all got together and cut the logs and sawed the lumber and built the church and this is relatives – great-grandparents,” Skibinski said.

“It’s got a lot of history, a lot of people passed through there.”

Due to dwindling congregation numbers, the church closed its doors for regular service a few years ago – but the building was still held in high regard in the community.

Skibinski grew up attending the church. He was married there and both his parents’ funerals were held there.

“All these thoughts went through my head and it – it really hurts,” Skibinski said. “It really hurts that somebody would do that.”

Ron Malkowich grew up in Fisher Branch and attended the church with his family well into adulthood, serving for a time as an altar boy.

He said the damage is considerable, though they are still awaiting an exact estimate.

“They smashed all the windows, the stained glass windows and everything,” Malkowich said. “They broke in – we have a big door that they ripped off. They went inside and vandalized some paintings on the wall that were hand-done years ago.”

In the days since the vandalism, Skibinski said the community has rallied – with one neighbour buying wood and boarding up all the broken windows at the church so rain wouldn’t get in.

Malkowich said the town will likely do some fundraising to cover the cost of repairing the damage.

Police say the investigation into the vandalism is continuing.

-With files from CTV’s Daniel Halmarson