The Winnipeg Blue Bombers now have a dance partner for the Western Final, and if it’s true that familiarity breeds contempt, then next week’s Blue Bombers vs B.C. Lions showdown should bring out some healthy doses of nasty and ugly.

The Lions knocked off the Calgary Stampeders 30-16 in the Western Semi-final in Vancouver Sunday afternoon, punching their ticket to Winnipeg for the Western Final at IG Field on November 13th.

The match-up will pit the first-place Blue Bombers, taking their first step toward a potential Canadian Football League dynasty in chasing a third-straight Grey Cup title after a 15-3 regular season, against a Lions squad that finished second in the West Division at 12-6 and seeking its first championship since 2011.

“This is what we wanted. This is a chance to knock off the dynasty, really, in the CFL,” Lions QB Nathan Rourke told TSN’s Farhan Lalji immediately after the Western Semi-Final win. “It’s a great team. I have so much respect for their culture, for all their players. 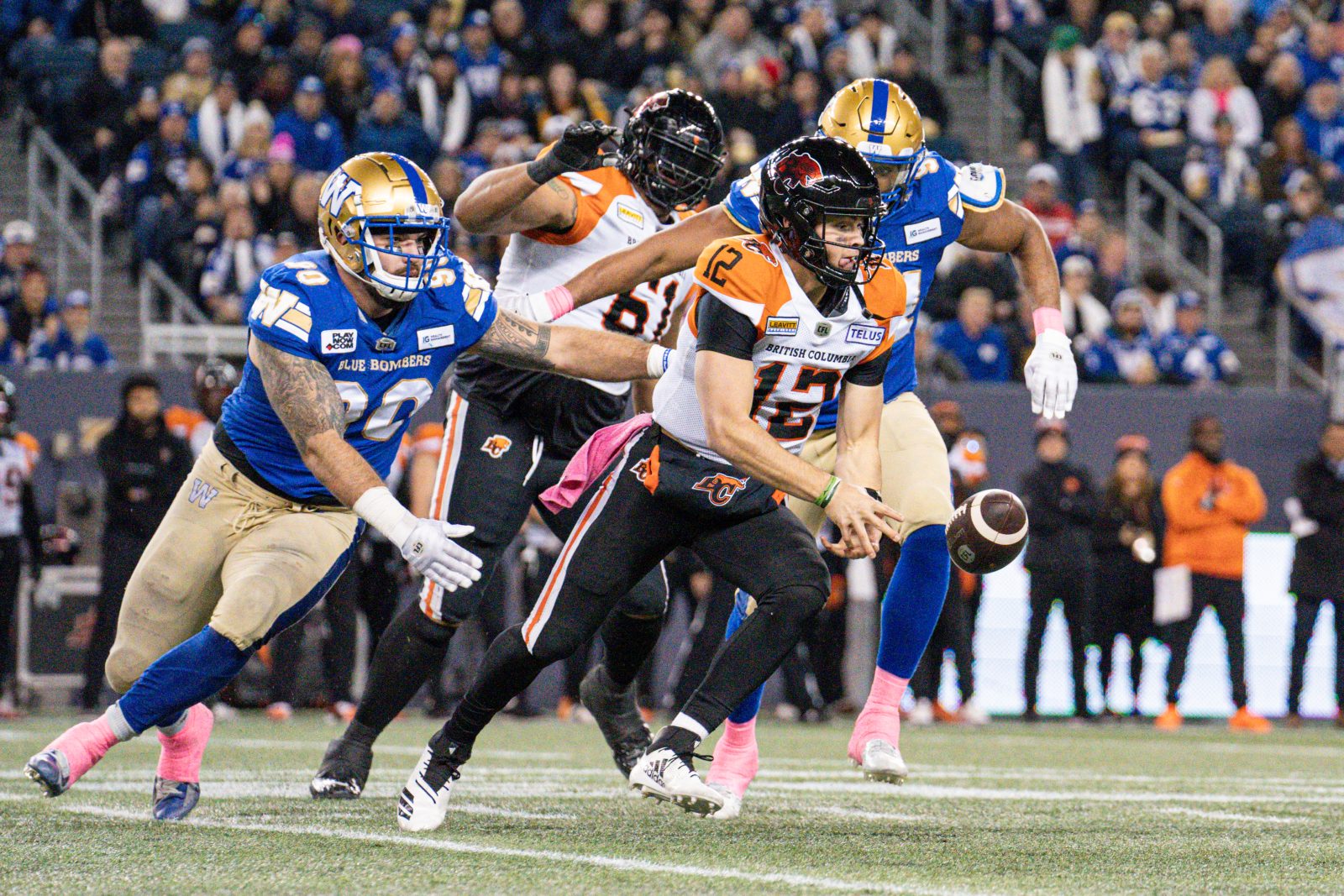 The Blue Bombers and Lions will meet for the fourth time this season, with Winnipeg having won two of three heading into this weekend – including a 24-9 win at IG Field in the regular season finale on October 28th in which both clubs already had their playoff positions solidified.

Winnipeg was 8-1 at home this year and is on a 28-2 run at IG Field dating back to 2018 that includes last year’s Western Final victory over the Saskatchewan Roughriders. This coming Sunday will mark the first time these teams have met in the playoffs since the 2016 Western Semi-final in Vancouver. 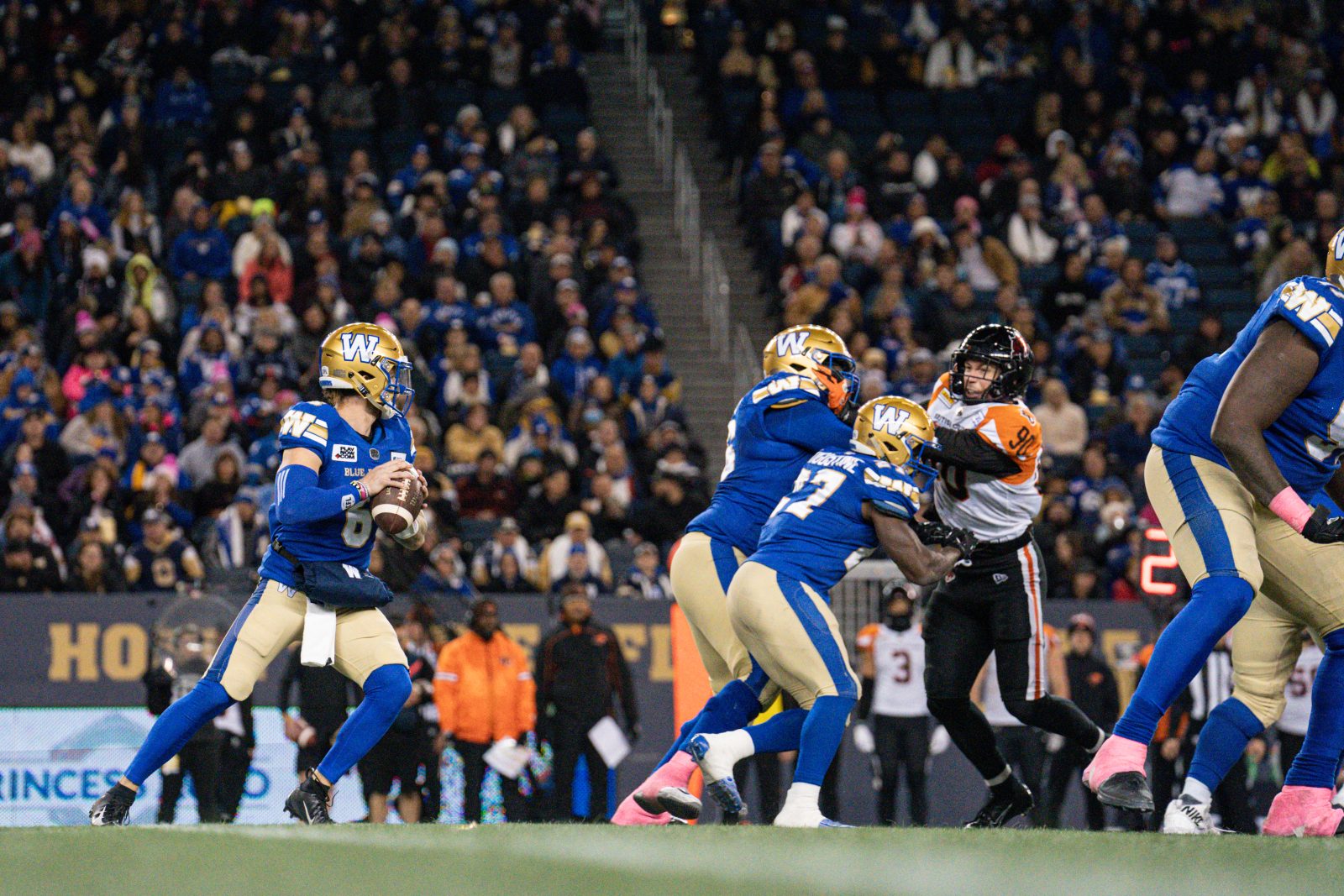 “It’s going to be hard going against us, especially coming into Winnipeg, playing against our guys,” said Blue Bombers defensive end Willie Jefferson prior to the West Semi-Final. “We’re going to give whoever we play what they want. Even though we had the bye we’ve been out here working. We don’t want to leave anything up to chance. We’re ready.

“If we can go out there and play Winnipeg football – Grade ‘A’ Winnipeg football – like we’ve been doing these couple of playoffs, we can handle business. It’s still about just going 1-0. We’ve only got to win two now and this is the first one in the way.”

Winnipeg practised three times during their bye week leading up to the Western Semi-final and used the time to both heal up while doing a deeper dive on all aspects of their own game.

“It goes back to fine tuning everything, making sure that with all our plays we know everything that’s going on and everybody has good communication. We do have to worry about somebody else, but right now we’ve been focused solely on us.”

Now that the opponent has been established, here’s a Western Final tale of the tape: 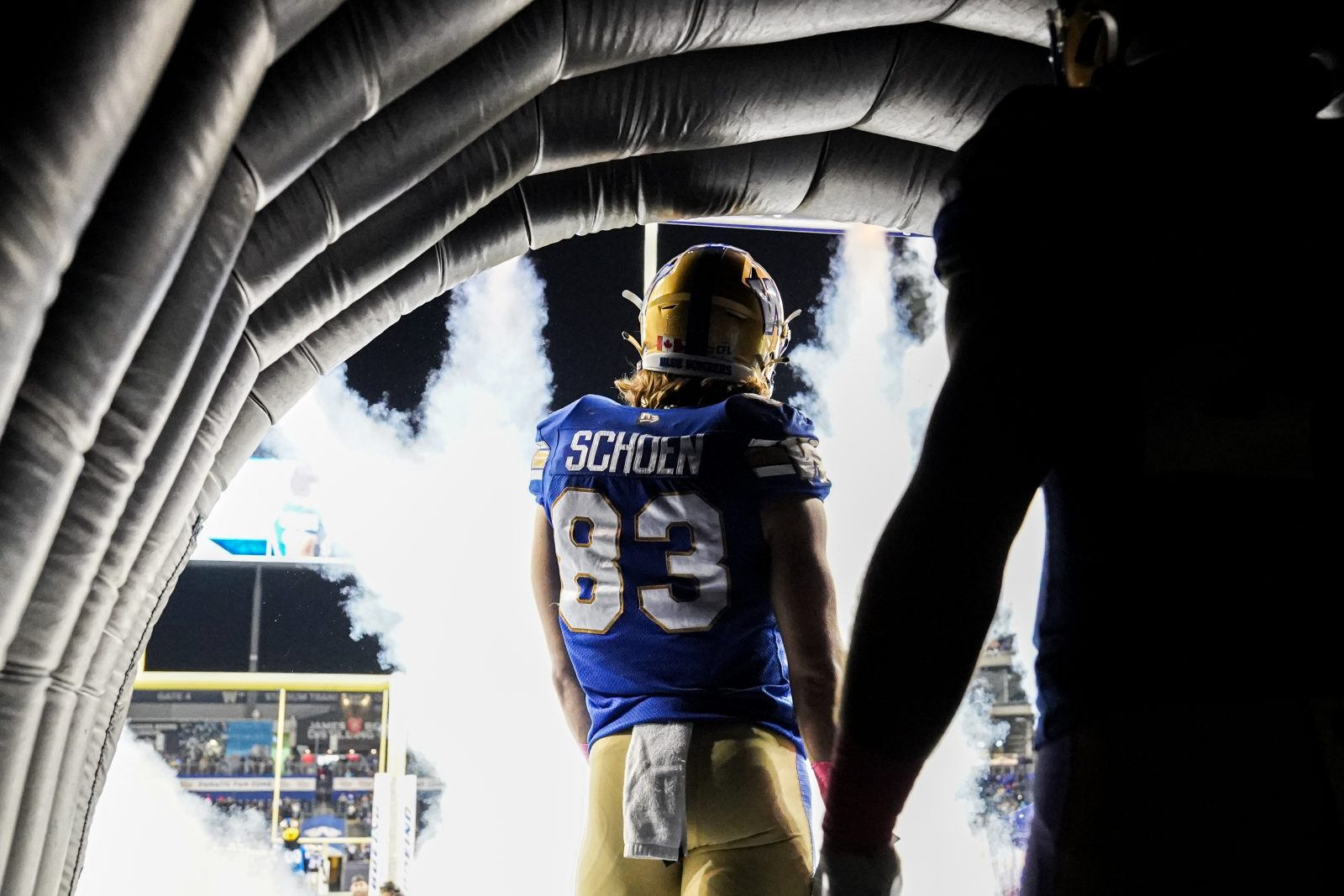 A brief recap: The Blue Bombers and Lions in the first meeting between the two heavyweights, with Winnipeg improving to 5-0 with a solid victory, handing B.C. its first loss of the season.

Playing on a short week after a road win earlier in Toronto, Winnipeg got an opening kickoff-return TD by Janarion Grant and bolted to a 21-zip lead before finishing the game in cruise control. Zach Collaros threw for 288 yards and three scores, two to Dalton Schoen and a third to Greg Ellingson.

A recap in full.

A brief recap: With first place in the West secured, the Blue Bombers opted to rest or limit the work of a number of players. Dru Brown started at QB for the Blue Bombers and threw for 325 yards and three TDs, but also had two interceptions returned for scores by Marcus Sayles and TJ Lee. Trailing 27-10 at halftime, Brown threw for the three touchdowns – two to Rasheed Bailey and another to Dalton Schoen — in the second half and finished with 325 yards, but a late rally fell short.

A recap in full 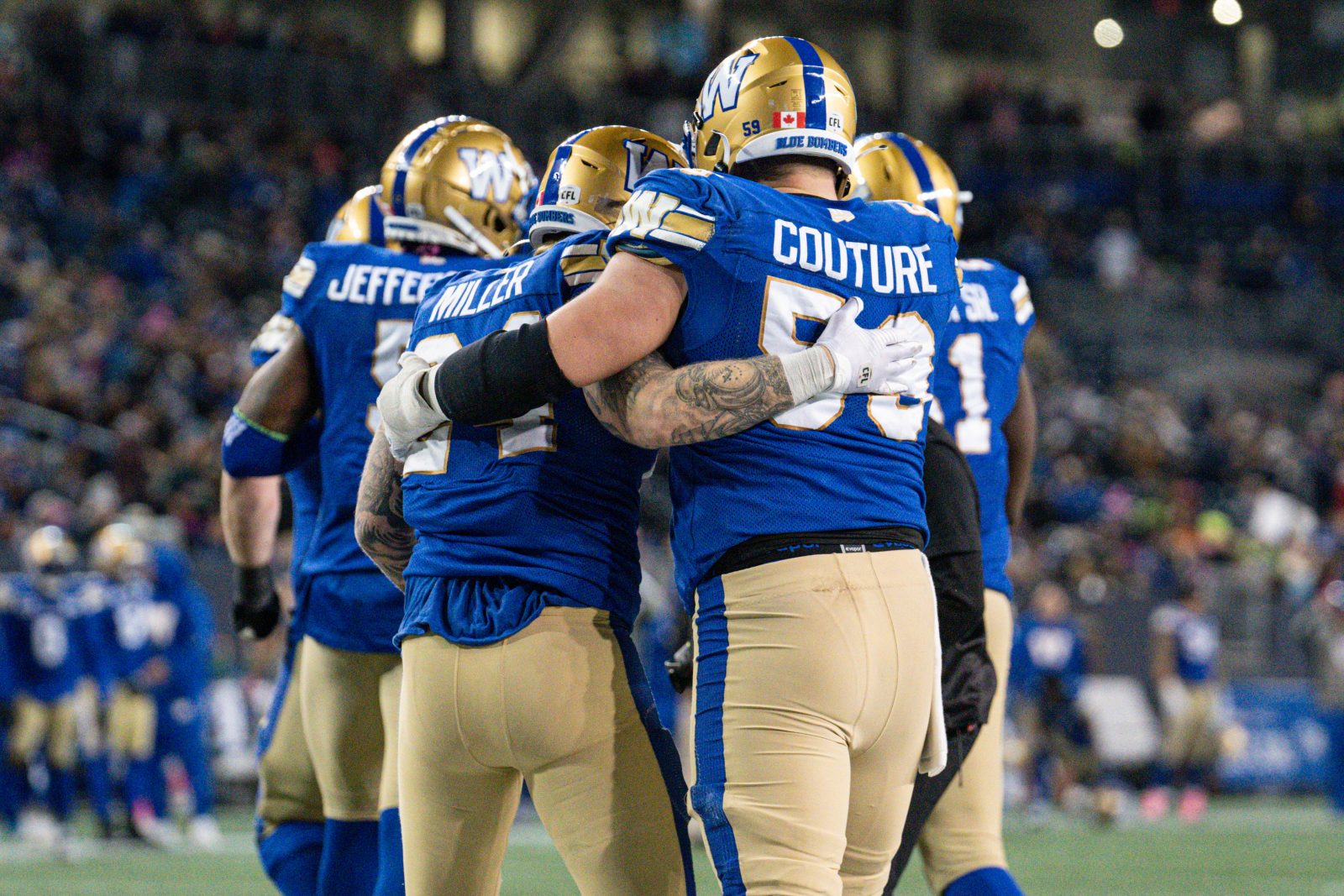 A brief recap: The Blue Bombers made history by posting a franchise-record 15th win in the regular-season finale, finishing with a 15-3 record. Both clubs had their positions in the standings determined – Winnipeg in first, B.C. in second – and used the game to get work for players coming back from injury and for others to stay sharp for the playoffs.

Collaros played just the first quarter but engineered scoring drives on the first two possessions with TD passes to Schoen and Rasheed Bailey. Those two TDs gave him 37 on the season, second most in Blue Bombers history to the 46 Khari Jones threw for in 2002.

The game also saw the return of B.C. pivot Nathan Rourke, who had been out since August.

A recap in full

148.3: QB efficiency rating for Collaros in his five quarters of work against the Lions this year. Collaros played all of game one and went 23-of-30 for 288 yards with three touchdowns and no interceptions, dressed but did not play in the second matchup and then went 4-of-5 for 68 yards and two TDs in the first quarter of the final game.

14-283-4: Dalton Schoen’s receiving totals in three games vs. the Lions – 14 receptions for 283 yards and four touchdowns. Schoen had at least 82 yards in each game, got a touchdown in each and averaged 20.2 yards per catch vs. B.C.

379: Yards rushing by the Blue Bombers in the three games vs. B.C. Winnipeg rushed for 141 yards in the first game, 74 in the second and 164 in the third. The 164-yard total was the highest rushing game for the Blue Bombers of the season while the 141 in the July win ranked as the club’s third-highest ground total.

66/36/31: In the one game this year in which both teams were healthy, and both had something at stake – the first meeting of the year – the Blue Bombers built a 21-0 lead before Nathan Rourke and his receiving corps found some traction. Rourke threw for TDs of 66, 36 and 31 yards – to Josh Pearson and twice to Dominique Rhymes – in what was a 43-22 Winnipeg victory.

(190139)
$13.99 (as of December 2, 2022 10:25 GMT -06:00 - More infoProduct prices and availability are accurate as of the date/time indicated and are subject to change. Any price and availability information displayed on [relevant Amazon Site(s), as applicable] at the time of purchase will apply to the purchase of this product.)

(3139)
$8.98 (as of December 2, 2022 10:25 GMT -06:00 - More infoProduct prices and availability are accurate as of the date/time indicated and are subject to change. Any price and availability information displayed on [relevant Amazon Site(s), as applicable] at the time of purchase will apply to the purchase of this product.)

(4059)
$16.99 (as of December 2, 2022 10:25 GMT -06:00 - More infoProduct prices and availability are accurate as of the date/time indicated and are subject to change. Any price and availability information displayed on [relevant Amazon Site(s), as applicable] at the time of purchase will apply to the purchase of this product.)

(5449)
$23.89 (as of December 2, 2022 10:25 GMT -06:00 - More infoProduct prices and availability are accurate as of the date/time indicated and are subject to change. Any price and availability information displayed on [relevant Amazon Site(s), as applicable] at the time of purchase will apply to the purchase of this product.)

(70676)
$174.99 (as of December 2, 2022 10:25 GMT -06:00 - More infoProduct prices and availability are accurate as of the date/time indicated and are subject to change. Any price and availability information displayed on [relevant Amazon Site(s), as applicable] at the time of purchase will apply to the purchase of this product.)