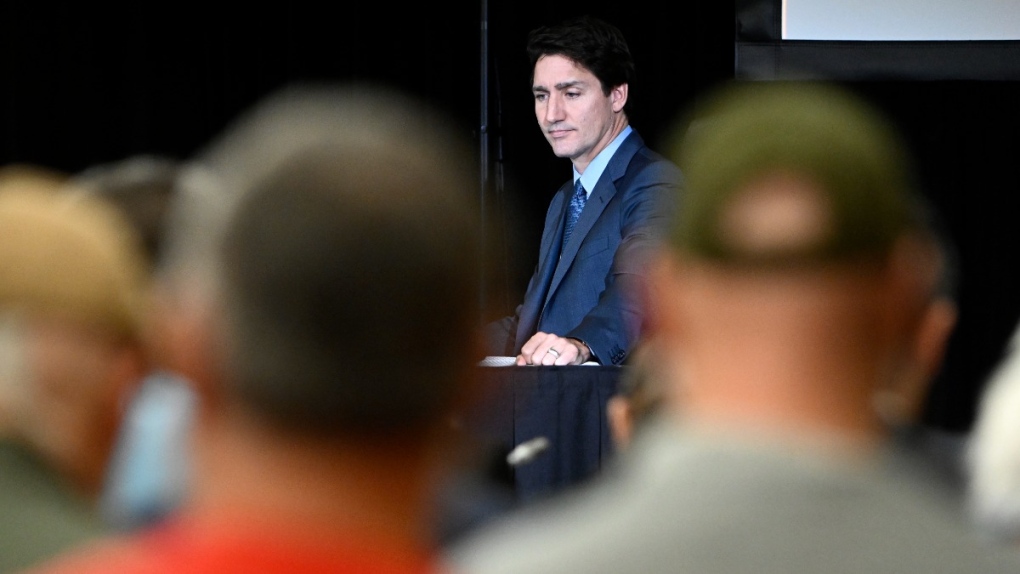 In a candid and telling exchange at the federal inquiry examining the invocation of the Emergencies Act, Prime Minister Justin Trudeau says that a central factor in his decision to enact unprecedented powers to shut down the “Freedom Convoy” protests, was his fear of what could happen if he didn’t.

After going through how he weighed all the advice he was given — from the head of CSIS, his national security adviser, top public servants, and his cabinet — he said he also paused to consider the consequence if he said: “Let’s give it a few days.”

“First of all, what if the worst had happened in those following days? What if someone had gotten hurt? What if a police officer had been put in a hospital? What if, when I had an opportunity to do something, I had waited and we had unthinkable happen… I would have worn that in a way that we would certainly be talking about in a forum such as this,” Trudeau told the Public Order Emergency Commission on Friday.

“More than that, the responsibility of a prime minister is to make the tough calls and keep people safe. And this was a moment where the collective advice of cabinet, of the public service, and my own inclination, was that this was a moment to do something… to keep Canadians safe. And knowing full well that this was an inevitable consequence of me signing ‘I agree’ on this note, I was very comfortable that we were at a moment where this was the right thing to do, and we did it,” Trudeau said.

This moment in his testimony came just prior to a morning break, and just after Trudeau painted a vivid picture of his consultations with premiers, senior officials, members of his Liberal caucus and opposition party leaders in the hours leading up to his decision.

He revealed to the commission that, the night before, there was a consensus around the federal “incident response group” table about invoking the Act and that, while it was helpful, he wasn’t necessarily looking for unanimity.

Trudeau also told the commission that he did not ultimately make up his mind until approximately 3:40 p.m. on Feb. 14, when he received an “invocation memo” from the Clerk of the Privy Council, advising him that the threshold had been met. Until then, he said, it was still possible he wouldn’t be here testifying today, given the commission is a product of his invocation.

“It was a big thing, not a small thing, to have the head of the public service formally recommend the invocation of the Emergencies Act and the declaration of a public order emergency. It’s not something that had ever been done in Canada before,” Trudeau said.

Earlier in his testimony, Trudeau said it was clear even before it began, that the coming trucker convoy would be “a different brand” of demonstration, and as it progressed the pressure ramped up for him to step in.

Testifying about the international pressure on Canada by the time the border blockades began to snarl Canada-U.S. trade, PM Trudeau was asked by commission council Shantona Chaudhury if he thought U.S. President Joe Biden was just as concerned about the protests’ impact as he was. Trudeau said “no.”

“I think he was very concerned, but I don’t think anyone was more concerned than me,” Trudeau told the commission.

‘A DIFFERENT BRAND OF EVENT’

Trudeau started his appearance before the commission going through the chronology of the protests and invocation, testifying that as preparations were being made, there was “already a little bit of worry that this might be a different brand of event than Canadians were used to seeing.”

The prime minister testified that he thought the anger seen among people planning to protest reminded him of anger seen during the 2021 federal election campaign. After the protesters rolled into the nation’s capital it wasn’t long before he was hearing directly from local MPs and then-Ottawa mayor Jim Watson about having the federal government intervene because, by the end of the first weekend, police’s ability to keep it under control “was not exactly there.”

“I dare say that citizens of Ottawa are used to political activity and protests on the Hill on a range of things. But this was present in their daily lives and disrupting their weekend in a way that wasn’t a usual political protest,” Trudeau said. “From the intimidation and harassment of people for wearing masks, to a very concerning story about folks disrupting the nearby homeless shelter and soup kitchen, there were indications that there was a level of disregard for others that unfortunately, we had seen examples of during the election campaign.”

As the protests persisted, Trudeau was facing calls from the Official Opposition and others to meet with or otherwise hear from the protesters in some way, and the commission has heard a lot about the various proposals and considerations of how it could happen.

Trudeau told the commission on Friday, while there was a willingness to talk, some of the “Freedom Convoy” leaders’ demands were non-starters including overturning the 2021 election results, or revoking federal health mandates. Moreover, Trudeau said he was concerned about setting a precedent or legitimizing the demands.

“I’m worried about setting a precedent that a blockade of Wellington Street can lead to changing public policy,” Trudeau said. “We have a robust functioning democracy and protests, public protests, are an important part of making sure Canadians are getting messages out there and highlighting how they feel about various issues. But, using protests to demand changes to public policy is something that I think is worrisome.”

Thinking more about this broad response, Trudeau sought to clarify:

“There is a difference between occupations and you know, saying ‘We’re not going until this has changed’ in a way that is massively disruptive, and potentially dangerous.”

Recalling a phone call he had with Gov. Gen. Mary Simon on the first Saturday of the protests, Trudeau told the commission they discussed Canada Unity’s contentious and ultimately abandoned “memorandum of understanding” (MOU). This was the document that suggested protesters could have the Senate and Gov. Gen. Mary Simon join them in forming a committee to order the revocation of COVID-19 restrictions and vaccine mandates.

As the commission has already heard, core convoy organizers tried to distance themselves from the proposal — which later morphed into a suggestion that protesters could form a coalition with opposition parties and the involvement of Simon to unseat the government.

Trudeau said the MOU displayed a lack of understanding of how Canada’s democracy and institutions actually work, and that he talked to Simon about having to let the “crazy things” being suggested, and the hateful emails coming in as a result, “slide off our backs.”

The prime minister is the last witness to testify as part of the weeks-long public hearing process, sparked by his decision on Feb. 14 to invoke the never-before-used federal powers out of fear for Canada’s economic and national security.

PM THINKS FORD TRIED TO GET HIM TO ‘WEAR IT’

On Friday Trudeau was also asked about what the commission has heard was considerable federal frustration over what appeared to be the Ontario government’s reluctance to engage.

In his own words, Trudeau thought Ontario Premier Doug Ford “was hiding from his responsibility on it for political reasons.”

Trudeau told the commission, in his view, the Ontario government was happy to permit the public perception that the convoy was an issue for the City of Ottawa and the federal government, but not the province’s responsibility.

“It was an unpleasant situation, there were bad headlines… I can understand that provincial politicians who were being overlooked in the complaints everyone had about why this wasn’t getting resolved, would say ‘You know what, let’s not poke our noses into this. And people will continue criticizing those people that help,'” Trudeau said.

He added that, while he believes there was provincial police engagement, “at the political level, there was probably a decision to continue to stay back a little bit, and let us wear it a little bit.”

HOW DID WE GET HERE?

Over the last six weeks in examining what led up to the invocation, the commission has learned about the impact on Ottawa residents and city council, the dysfunction in the Ottawa Police Service, and the chain of command and information-sharing struggles between the OPP and RCMP.

The hearings also painted clear pictures of the frustration that came from Ontario government’s apparent lacking involvement, the convoy organizers’ power struggles and grassroots social media origins, and the priority put on the border blockades for economic and diplomatic reasons.

Over the last and final two weeks, Commissioner Paul Rouleau has heard about the incredible amount of federal bureaucracy involved, differing interpretations of what the Emergencies Act as drafted decades ago prescribes when declaring a national public order emergency, and what role top cabinet ministers had in proposing solutions.

Limiting the findings, however, has been the federal government’s refusal to waive solicitor-client privilege as it pertains to the legal advice cabinet received about whether the protests reached the CSIS Act threshold of a “threat to the security of Canada,” coupled with a gradual release of sometimes highly redacted government documents.

In effecting the extraordinary powers after high-level consultation with the premiers and opposition leaders, the federal government put in place a sweeping range of measures to support the provinces, municipalities, and police forces facing the continued demonstrations. The act was then revoked on Feb. 23.

This entire commission process was sparked by Trudeau’s invocation of the Act, as with deciding to declare a national public order emergency, an entire accountability process was enacted, requiring Trudeau to strike this commission, which will have to present its report to Parliament by Feb. 20.

(9474)
$59.99 (as of December 8, 2022 10:28 GMT -06:00 - More infoProduct prices and availability are accurate as of the date/time indicated and are subject to change. Any price and availability information displayed on [relevant Amazon Site(s), as applicable] at the time of purchase will apply to the purchase of this product.)

(312)
$17.89 (as of December 8, 2022 10:28 GMT -06:00 - More infoProduct prices and availability are accurate as of the date/time indicated and are subject to change. Any price and availability information displayed on [relevant Amazon Site(s), as applicable] at the time of purchase will apply to the purchase of this product.)

(2639)
$40.00 (as of December 8, 2022 10:28 GMT -06:00 - More infoProduct prices and availability are accurate as of the date/time indicated and are subject to change. Any price and availability information displayed on [relevant Amazon Site(s), as applicable] at the time of purchase will apply to the purchase of this product.)

(3606)
$24.98 (as of December 8, 2022 10:28 GMT -06:00 - More infoProduct prices and availability are accurate as of the date/time indicated and are subject to change. Any price and availability information displayed on [relevant Amazon Site(s), as applicable] at the time of purchase will apply to the purchase of this product.)

(71972)
$54.77 (as of December 8, 2022 10:28 GMT -06:00 - More infoProduct prices and availability are accurate as of the date/time indicated and are subject to change. Any price and availability information displayed on [relevant Amazon Site(s), as applicable] at the time of purchase will apply to the purchase of this product.)