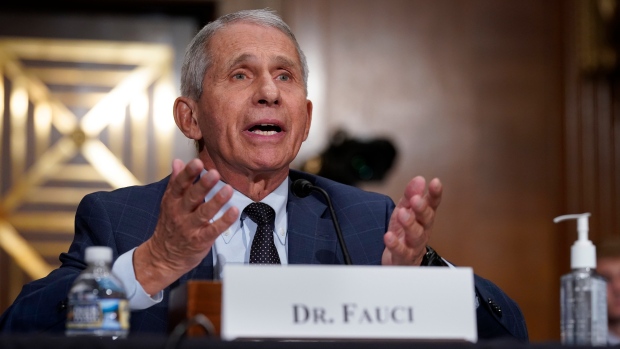 TORONTO — The public face of the response to the COVID-19 crisis in the United States says his country’s partisan divide helps explain why vaccination uptake in the U.S. is now lagging behind the Canadian rate.

Canada’s first-dose rate overtook that of the U.S. two months ago, owing to our longer permissible lead time between doses; approximately 70 per cent of Canadians have received at least one dose, compared to 55 per cent of Americans.

Asked by CNN’s Kate Bolduan why the U.S. is now lagging behind its northern neighbour, Dr. Anthony Fauci – director of the U.S. National Institute of Allergy and Infectious Diseases – put the blame on politics.

“Canada is doing better not because we are trying any less than they are trying. It’s because in Canada, you don’t have that divisiveness of people not wanting to get vaccinated, in many respects, on the basis of ideology and political persuasion,” he said Monday.

As with other issues related to COVID-19 in the U.S., opinions on vaccination have somewhat fallen along a left-right divide, with some conservative media personalities and Republican politicians questioning their usefulness.

In Canada, by way of contrast, mainstream conservative politicians and pundits have been pro-vaccine, with their criticism focusing instead on the federal government’s efforts to procure enough doses to inoculate all Canadians who want to be inoculated.

Fauci said political agreement over the benefits of COVID-19 vaccines helps explain why vaccine uptake is stronger in Canada than in the U.S.

“Political differences are totally understandable and a natural part of the process in any country, but when it comes to a common health issue in which you’re in the middle of a deadly pandemic and the common enemy is the virus, it just doesn’t make any sense to essentially disregard or don’t pay attention to what’s obvious,” he told CNN.

Vaccination is not the only way in which Canada appears to have outperformed the U.S. in avoiding the worst of the coronavirus.

Data from CTVNews.ca trackers show that the U.S. has had a higher COVID-19 case rate than Canada for almost all of the pandemic, and a higher death rate since the beginning. When it comes to the current situation, the majority of provinces and territories – including Ontario, Quebec, Alberta and British Columbia – are reporting fewer new cases per capita than any U.S. state.

“Canada is doing better, not because we are trying any less than they are trying. It’s because, in Canada, you don’t have that divisiveness..” pic.twitter.com/if2Ya14R00