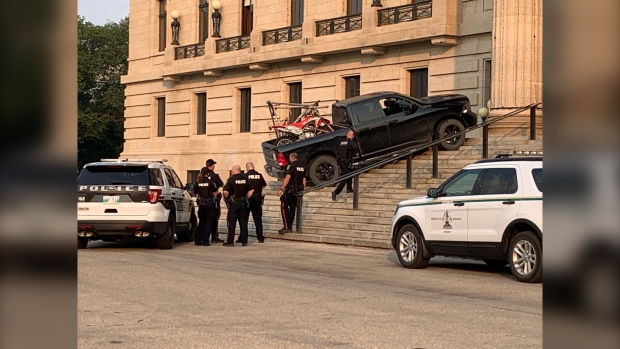 WINNIPEG — Officers with the Winnipeg Police Service are holding a news conference on Thursday to provide more information on the vehicle driving up the steps of the Manitoba Legislative Building, as well as a homicide.

Police will be speaking at a news conference at the Winnipeg police headquarters at 12:30 p.m. CTV News Winnipeg will live-stream the event.

On Wednesday, officers responded to the legislative building after a truck was driven onto the steps. Images from the scene show a black truck on the second level of the stairs, with what appears to be a red dirt bike and some metal poles in the bed of the truck.

The incident took place just after 6:30 p.m. and two people were arrested.

At Thursday’s news conference, police will also be releasing information on a homicide investigation in the area of Jefferson Avenue and King Edward Street.

– With files from CTV’s Devon McKendrick and Renee Rodgers.