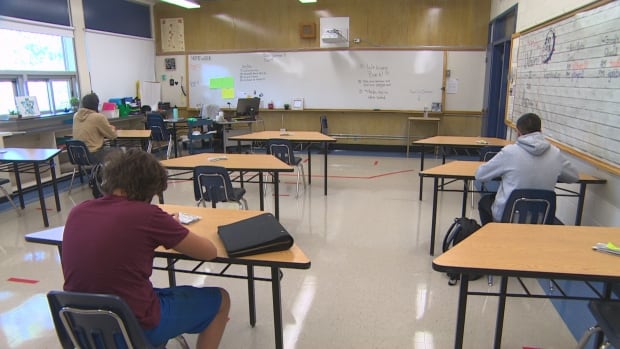 Manitoba’s largest school division plans to have teachers walk thousands of students through an in-class exercise next week meant to simulate what it could be like if the entire school system is suddenly forced to learn remotely.

The Winnipeg School Division emailed teachers late this week to tell them about the in-class mock code red exercise on Tuesday morning.

The idea is to give students a hands-on crash course in what learning might be like if the province quickly moved the entire school system into the red, or critical, level of Manitoba’s pandemic response system.

“We expect there to be some bumps [in] learning, and by doing a practice for a full morning, hopefully most of those bumps can be identified and ironed out before we have to do the real thing, should that happen,” Radean Carter, a spokesperson for the division, said via text message Friday morning.

Tony Marchione, the acting director of research, planning and technology for the division, helped come up with the exercise after seeing the entire Hanover School Division in southern Manitoba forced into remote learning last week due to soaring test positivity rates in the area.

“They moved into critical level red with one day’s notice. We shared with our schools and our administration that it’s possible that that could happen in the city [of Winnipeg] … and we need to be ready,” he said.

“This is a rehearsal, just like we rehearse fire drills.”

Students and teachers will have a chance to review the processes seated at their desks. They’ll practise logging in on their devices and accessing online platforms and lessons as if they were at home. Teachers will be present to help out if students encounter difficulties, Carter said.

There are about 32,000 students in the Winnipeg School Division alone.

Marchione said WSD’s schools surveyed students in September to see who was in need of laptops and other devices for remote learning. Roughly 7,700 devices have been purchased as a result.

The division has distributed over 3,000 Chromebooks to schools for those who don’t have access to their own device or computer at home. Marchione said the division is waiting on another 2,500 Chromebooks to add to its remote-learning resources, but those shipments have faced delays due to high demand across North America. They’re expected to arrive in mid-December.

The division has also procured 1,200 Apple iPads that come with cellular data for students without WiFi access at home. Between the Chromebooks and iPads, Marchione believes the division’s remote-learning needs will be met if schools do in fact enter code red restrictions.

For schools where there aren’t enough Chromebooks and laptops handy for the Tuesday in-class exercise, students may need to share, minding sanitizing protocols in place, said Marchione.

Not new for some

Come Tuesday, kindergarten to Grade 12 students who would normally be in class will participate, though some high school students who are on their home-learning day on Tuesday will remain home, she said.

The Winnipeg School Division exercise will happen 10 days from when provincewide code red restrictions are set to expire, though Manitoba’s chief public health officer said this week to expect some restrictions to remain in place.

Manitoba has seen triple-digit daily case numbers since Oct. 19. The average over the five or so weeks since then works out to over 300 daily cases.

Almost 2,700 Manitobans up to the age of 19 have tested positive, or roughly 17 per cent of cases to date, though officials have said only a few instances of school-based transmission have been confirmed. The source of infection in the majority of student cases has been attributed to exposures out in the community or in the home.

The province has acknowledged it is mulling extending the Christmas break for students, though officials haven’t yet said that will occur for certain.