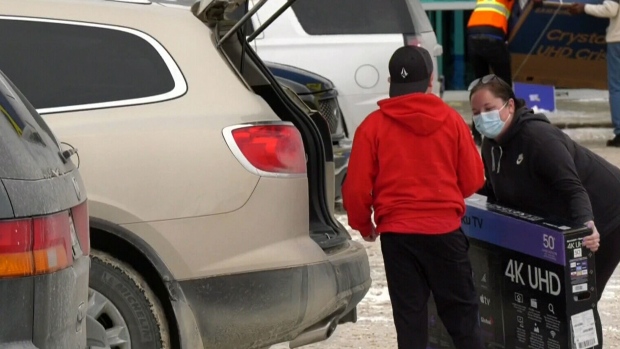 WINNIPEG — On a normal Boxing Day, people would be lined up outside their favourite retail stores to cash in on those end of year deals, but with COVID-19 restrictions in place, Boxing Day is operating a little differently.

COVID-19 has forced many retail stores to close their doors to the public, and people looking for end of year deals had to go online or arrange for curbside pickup.

Winnipeggers like Leah Duquette managed to score some deals using the pickup method. She went to the Lego Store in Polo Park Shopping Centre and walked out with her hands full.

“Normally, you would interact with customer service inside, say thank you, and show a little more appreciation,” she said, “(Now) it’s kind of just like wave, hi, thanks, bye.”

Duuette said ordering online isn’t quite the same as searching for a deal in-person.

“Having to call an order and not be able to actually see it in person was totally different,” she said

Across the street at Best Buy, Jason Doornink waited curbside for some items he ordered online.

He said this saves him the trouble of having to wake up early.

“Curbside pickup, in my opinion, we’ve done a few of them now, I don’t mind it,” said Doornink. “You pull up, text a number, they bring your stuff out to you. It’s easy, avoid line ups, avoid confrontation.”

John Graham, director of government relations for the Retail Council of Canada, said most retailers have moved their Boxing Day sales online.

He said many retailers are backlogged with online and curbside orders, but not having customers inside the store could hurt sales.

“The sales that are more impulse (are) going to be slowed down simply because people are going to say, ‘If I can’t get the order until mid-January I won’t bother this time, I’ll pick it up later,'” said Graham.

Graham said Boxing Day is the second biggest shopping day in Canada next to Black Friday.

He said end-of-year sales make up a large portion of many retailers’ annual income.

Doornink said he would rather avoid the till, pay online and pick it up.

“Obviously, some people don’t have that ability, but for those of us that do, I find it easier,” he said.

But some still miss the usual Boxing Day experience. Duquette said she prefers to see what she’s buying beforehand.

“Kind of having to guess what size it is, cause I didn’t think (my Lego set) was this big, but it is, so now I have to figure out where I’m going to put it,” said Duquette.