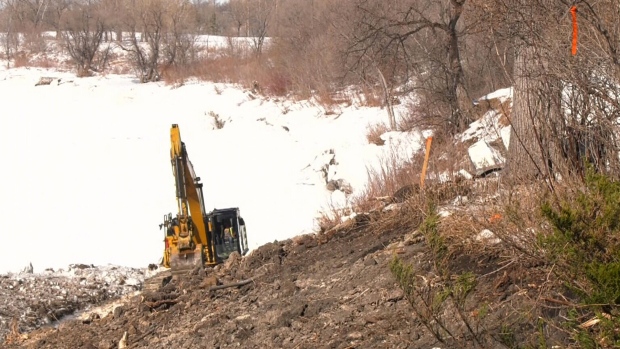 WINNIPEG — One of the benefits of owning a home along the Red River is the view, but for some, it’s starting to slip away.

Bob Dick, a resident of Dunkirk Drive, said in the fall of 2019, the water levels on the Red River behind his house were unusually high.

“The river was on top of the bank and was starting to get into the soil and the riverbank started to fail,” said Dick.

Last fall, the Red River in Winnipeg rose 14 feet above the winter ice level. The highest ice level ever recorded in the fall since Environment Canada’s records began in 1970.

“One day alone like I had about six to eight feet just drop into the river,” said Dick, referring to his river bank.

When Dick and his neighbours realized they’d have to restore the riverbank, they reached out to the city and the province for financial help but were told it wasn’t the government’s responsibility.

Dick and several other neighbours are banding together to cover the cost of restoring their river banks, but it’s not cheap.

“We’re into it, I would say around a million dollars,” said Dick. “We already know it’s going to be touching a million, and it may be more.”

Norm Van Elslander lives next door to Dick and has resided on Dunkirk Drive for 55 years. When he was told he’d be on the hook for the cost of repairing the riverbank, it didn’t sit well with him.

Van Elslander said he’s already lost 40 to 50 feet of his backyard, and his underground sprinkler system.

In a statement to CTV News, the City of Winnipeg said:

“The city does not have council-approved funding for riverbank restoration on privately owned land.”

Construction continues on Dick and Van Elslander’s riverbank, but the experience has Van Elslander questioning if he wants to stay at all.

The neighbours said construction will continue for another three weeks.

They have to finish before the weather warms up, and the river starts flowing.