The Winnipeg police’s armoured response vehicle was sent out 78 times in 2018, including 34 deployments with the tactical unit, 21 warrant executions and 18 community events.

The armoured vehicle, purchased in 2015 for $342,800, was involved in eight active firearm events last year, including one in November where the vehicle was shot multiple times, according to a report to be presented to the Winnipeg Police Board Friday.

On that occasion, a 13-hour standoff on Bannerman Ave, the vehicle took multiple shots meant for police officers, the report says.

The armoured vehicle, or ARV1, seats eight and has eight gun ports, according to a police news release from the time they rolled the vehicle out in June 2016. The vehicle was purchased to ensure police have appropriate equipment in volatile or violent situations, the police report says.

It was also used for 21 warrant executions, mostly for places where firearms were believed to be or warrants executed under the Controlled Drug and Substance Act, according to the report.

On four occasions, the 7,710-kilogram vehicle was sent in response to domestic violence situations, the report says. It was deployed once for an abduction.

It was also sent to 18 community events — primarily visits to elementary schools across the city, the report says. Other events include the Winnipeg Police Service Half Marathon, the Manitoba Down Syndrome Walk with Me and Costco Safety Day. 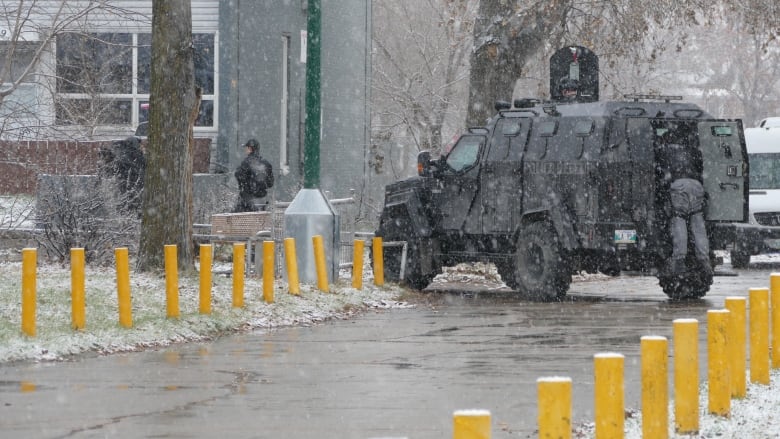 The armoured vehicle response unit was used during a stand-off in November on Chudley Street south of Tyndall Avenue. (Warren Kay/CBC)

“Several police members have relayed that citizens appreciate having the opportunity to see the vehicle and discuss its role in providing a safer outcome to firearm events in Winnipeg,” the report says.

The Winnipeg Police Board passed a resolution in June 2016 requiring police to provide a report on ARV1’s deployments over its first year of operation.

The 2018 report is set to be presented to the Winnipeg Police Board on Friday.