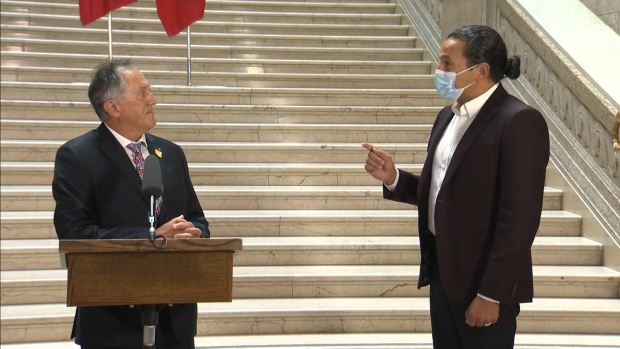 WINNIPEG — It was a tense start for Manitoba’s new Indigenous reconciliation and northern relations minister, who was called out publicly by the province’s opposition leader over comments he made about residential schools.

The province said Lagimodiere, who is Métis, has been mandated to develop an agenda for reconciliation in consultation with First Nations, Métis and Inuit leadership.

During his first public appearance minutes after being sworn in as minister, Lagimodiere said of residential schools that he believes at the time, “they really did think that they were doing the right thing.”

“From my knowledge of it, the residential school system was designed to take Indigenous children and give them the kind of skills and abilities they would need to fit into society as it moves forward,” Lagimodiere said.

The comments sparked immediate backlash from the province’s opposition leader.

“It was the express intent of residential schools to kill the Indian in the child—it is not cultural relativism, it is not revisionist history for us to say that that was wrong.”

Kinew went on to tell Lagimodiere that if he is going to take his appointment as the Indigenous reconciliation and northern relations minister seriously, he has to change his opinion.

“You can’t be out here defending residential schools if you want to work with Indigenous communities.”

Lagimodiere took on the new role after former Indigenous and northern affairs minister Eileen Clarke resigned from the role. The resignation came a week after Pallister made comments regarding colonial settlers.

“As an Indigenous Manitoban, I sincerely believe that residential schools were tragic and were designed to assimilate Indigenous children and eradicate Indigenous culture. That was wrong then, and it is wrong now.”

“It didn’t take long for the new minister to show where his true loyalties lie,” Daniels said in a statement. “It only goes to show, that this premier and his dwindling base of followers are beyond out of touch and have no business being in charge of any departments that involve reconciliation with First Nations.”

It is a concern shared by newly re-elected Grand Chief Arlen Dumas of the Assembly of Manitoba Chiefs who called the comments racist.

“It is apparent the new Minister has already signaled that nothing will change and will perhaps regress to the detriment of First Nations citizens,” Dumas said in the statement.